What version did you start with when beginning Krita?

My first version I downloaded was probably during Krita 3. It had this splash screen: 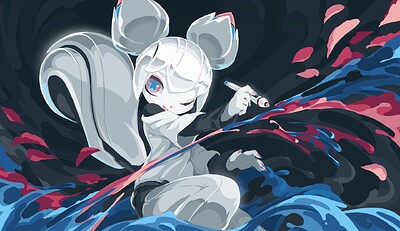 I used Krita version 4.2.8.
The splash screen was this:

I can’t remember. I just remember it was around 2010. I came from manga/clip studio

First time I tried Krita was probably around 1.4.

Wasn’t very impressed, it felt like MSPaint on steroids.

I think I first tried it around 2.4 after reading David Revoy’s blog posts (who’s typing in here at this moment!), but didn’t get on with it.

I had actually tried an earlier version but no idea which one…continued using Painter for a while…only recently moved to Krita after getting fed up with Corel and all their sales/marketing BS.

Krita is much better anyway but I have tons to learn…

My first finished piece ‘an Angel’ was in June 2010, a Krita 2.2+SVN compiled; but I knew Krita years before that.

I started in 4.x - so I’m pretty new to Krita. I had been trying to paint using GIMP and Inkscape and not having a great time. I sure was happy to find Krita.

The first version of Krita that I used was more recent… 4.4.3 (I think.)
Before that, I’ve used Gimp but after a few years of using Infinite Painter on my phone, I wanted art software on my computer that showed brush textures better just as Infinite Painter does on Android. I heard about Krita and tried it and fell in love with it. Then I found out that Krita was available on Android and I love it even more!

My first met krita might be 2.7 or 2.9, running on an Athlon64 3500+ computer, and can’t even handle it.
When I decided to drop win7 and switch to Linux on my working machine, I got 4.2.9 and 4.3.0-beta1 as daily drive to warm up and gradually ditch photoshop before my full switch.

I tried Krita for maybe less than an hour in 2015 or 2016 or something when I was testing Windows 10 apps and saw it on the newly released Microsoft Store. Sadly I quickly closed it as it didn’t perform as I wanted it to, and my school was using Photoshop, and so were the artists I followed…

My first real try with Krita was in 2019 with 4.2, so I am actually kinda new to it! I wanted to move away from PS and was considering Clip. I had been really into open-source programs like Blender at the time so I wanted to try Krita again and give it another shot. I had read the improvements to Krita 4.2 and they looked exciting, way more so than the recent updates of PS and Clip which felt stagnant.

The moment I opened Krita and saw the brush preview tilted with my brush (something Clip does not do at all), I knew I had to dive deeper

It even kept tilting as my pen hit the canvas, something Photoshop didn’t. It was naturally a hard transition because of muscle memory, but I dug to find that all my favorite features were actually in Krita, and the whole app was less buggy, more customizable and more fun! Been using Krita ever since and even “converted” a handful of artists to it!

Recently I am trying Photoshop again (to collect inspiration and ideas for new brushes for my Krita pack as there is a ridiculous amount of brush packs and tools to explore), but I am baffled that PS is still so buggy and feature-less. There are too many problems to list; sometimes I have to put my pen down and grab my mouse because some of the buttons won’t work otherwise, the program’s interface glitches out, resizing the brush lags a whole ton sometimes, changing brush mode back to “normal” was fickly with a pen, smudging by mistake might force me to wait multiple minutes before I can continue working and so on and so fourth. So glad I switched to Krita, I don’t think I will ever turn back!

Since I open krita after the demise of gimp-painter and after sai [bootleg] is not enough for me, also after trying several app [including ps cs 5.5] , I also have opportunity to try clip.

Krita just clicked for me. I wrote about it in devart but when well its still alive, i guess. I kinda just tried sketching and before i knew i have a face and butterflies

its my drawing app since then.

Probably knew it in 4.2.8. Then mainly use it after 4.4. Before, I have always been fascinated by csp’s color pattern brushes. Later I found out that krita has it.
It is worth mentioning that before I bought csp, someone said “it is better to use krita”, but the introduction of krita on our encyclopedia website is very short. I thought it was a software that simulates crayon drawing… So later I revised them drastically
Krita_百度百科 (baidu.com)
krita - 萌娘百科 万物皆可萌的百科全书 (moegirl.org.cn)

I really don’t remember the version number, all I know is it was during the second half of 2018. I am pretty sure version 4 had already rolled out by that time.

I still remember the bugs I tried to find after I started using with the smudge engine.
I still cant believe a couple of my suggestions came though and are things I still use to this day.

Ahhh. The first time was when it was first available for OSX (can’t remember which version was). There were bugs, lot’s of bugs, so many bugs that I almost quit completely. But then, it had the animation timeline and it was already better than CS6 (the Photoshop version I had at the time). So I said to myself: let’s wait and see how it grows.

And it was very easy to talk to the developers. Something that I always thought was impossible.

So I stuck with it and tried to adjust the interface to minimize the buggy experience (had to hide the most problematic Toolbars/Dockers to make it bearable).

It’s funny that I recently had to install Photoshop for a job and found it very unintuitive (I had more than 10 years of working experience with it).

So it’s great to have been able to watch Krita grow so much. The new version 5 is trully fantastic and this community is really unique.

A 1.6.x version was the first Krita I came in contact with, sometime around the time of my first Linux attempts. I played around with it, but I didn’t use it seriously, certainly not for “a work” from start to finish. Until the end of last year, I only ever used Krita when I couldn’t achieve my goal with other graphics programs, albeit always the latest version.

First used krita 3 when coming over to Linux in May 2017. Have had months at a time where use Sai, also Paintstorm quite a while ago, but the krita 5 version has incredible features that have pulled me to working in krita now since a few weeks ago … the RGBA brushes are amazing, taking the texture and expression I really enjoy to a whole new level, as well as the MyPaint engine, creating timelapses, moving palette colours around/to canvas, colour-marking layers, great plugins, speed adjustments and the HSV adjuster. Amazing, and I think there’ll be a lot of new people soon who are blown away by the krita 5 release too.