2hrs of process gone, are there auto backups I can access?

Been animating, done a huge chunk of coloring for half the frames, saved(100% sure), closed a file, hit yes to save again jut in case. Opened it up - everything that has been done for those 2 hrs total - gone. I know there is an auto backup feature, I dunno how it works really. Is there some folder with backup copies or something?

Krita creates backup files that are named like your original but with a ~ at the beginning. On some file systems they are hidden by default. They are usually located in the location where the original file was.

I never had issues with Krita not saving, maybe you just accidentally saved the file somewhere else. Another thing that sometimes happens is when you have the project open in two different Krita windows/tabs you save the first one were you worked on and then you save the second one too, which was not modified, it will save over all your changes (since it’s still the same file) because Krita can’t know the file was saved in another tab/window and the changes were more recent.

yeah, the second case is exactly what happened. two separate windows that is. so like… backups are also overwritten?

Best check your Krita Settings, it should show you if the feature is even enabled and where backups are saved etc. 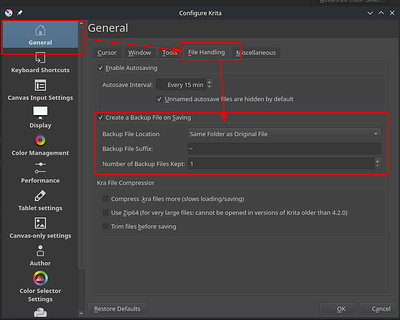 When I remember correctly the backup feature works like that: When you save it creates a backup file that contains the state from your previous save in case something went wrong, so its basically always a version older. When you are lucky yours is still there somewhere. However it wont really help you when you didn’t do a single save earlier, there is nothing to back up.

Are the tears of relief a thing? Cuz Im shedding some. It actually backed it up! Thank you very much for the help!

The ‘auto backup feaure’ you mentioned is probably the Autosave function and it’s only of use to krita in recovering from a crash. If you exit normally, that autosave file is deleted.

There is no automatic backup process.
Regular Saves are a good idea to keep the Backup file recent. Also, you can do multiple levels of Backup file with regular Saves to have a short term version history.
There is also File → Save Incremental Version and Save Incremental Backup.
A long section of the manual deals with all this:
Saving, AutoSave and Backup Files — Krita Manual 4.4.0 documentation