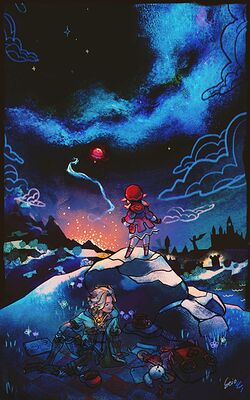 Meet Klee (a pint-sized magically-powered demolitionist–arsonist combo) flying her first lantern for the Liyue Lantern Rites (all those other dots way in the distance) while her brother watches (to make sure it didn’t accidentally turn into a bomb, mostly) under one of Mondstadt’s brilliant milky-way sightings! SUCH LORE!

Genshin Impact is a breathtaking beautiful game sometimes (often, really), so for a fanart event on the official forums I decided to paint as much of the landscape and skies as I could keeping to the theme…and messed up because I just can’t handle dark scenes.

That and the fact that I didn’t have any particular style in mind but wanted to go heavy on the stylization because I didn’t have enough to time to work on the submission means it turned out way messier than expected. But I like how the sky turned out at least.

Mostly painted using Ramòn’s charcoal brushes and a bit using his impressionist brushes. The man is a quality brush machine!

(If you play Genshin Impact and would like to bump my submission for the fanart event, here’s my link

I like the line style that feels like doodle but that also really dense and has detail, and the texture/color of paints are very mystical and splendid that make me think of beautiful stained glass art. Great!

A friend on Twitter also mentioned the stained-glass aspect. I really missed out on making the whole thing look like that. Would’ve been much cleaner too, right, and I’d’ve gotten to use the fancy brushes for the textures there as well!

Will definitely make the next one in this series look like that!

Thanks for your apreciation. I love to make brushes, but i even like more when people use those brushes and have fun with them. Nice picture.