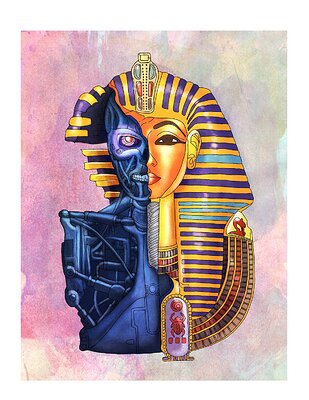 Very cool! Welcome to the forums.

thank you so much! your art is amazing, it reminds a little of hr giger.

Thank you! Definitely an influence.

Nice! Great job on the Gold!

Thank you very much, your drawings are amazing, congratulations.

There was a comic in the 70’s here in the Netherlands, called Stef Ardoba. One of the stories took place in ancient Egypt and featured a robot that looked like an Egyptian woman. She was thought to be defeated, but when they returned to the present, she was still active and hell-bent on destruction.

Random thought, I know, but it popped into my mind as soon as I saw this

Hey, what’s up! when i created this drawing i thought of mixing the terminator t800 with an egyptian image, i researched some references and joined the two. I don’t know this comic later I’ll take a look, thanks for the tip.
In this drawing I tried to simulate the colors of the old comics that I really like

I don’t know why your art triggered a memory about something I haven’t thought of in 40 years, but I guess my brain is weird like that.