well I answered the survey. and as asked if I have the magical powers to make a feature happen it would be two:

But this Giant Buttons is systematic all throughout Krita. I wish it could not be so, but the animation docker is really one of the “biggest” culprits to it.

Hi, I’d love to see as there is already new frame toggle feature in (which just copies the previous frame) to have the same functionality which creates a blank frame if there’s no frame at the active position when you start drawing, it would make so much sense (you can check how this works in blender grease pencil if needed) to have it ;-).

I’m not sure if this thread is still alive though xD.

Oh no, it appears I’ve missed out on this thread as well

Yes, having a shortcut to drag (zoom in/out) the timeline instead of dragging those icons.

Krita already has this functionality. Space + RMB and drag in the timeline to zoom.

I believe another important feature would be a toggle in the Timeline Docker which allows the user to change the unit of measure from frames to seconds, or perhaps include it as an overlay once the user zooms out to a certain level within the timeline. This would aid in syncing animation to audio files such as music, and help with timing of shots to more accessible second intervals.

Another small fix would be to change the entering of values in the Animation Docker. Currently you type in a number, press enter and the whole entry is highlighted for some reason. You can’t even click out of the box within the docker to confirm the entry. This forces you to click in either the Timeline, or elsewhere to confirm, making the whole process inefficient. I’ve had many times where I went through this, wrongly typed in a hotkey with the entry still selected, and ended up jamming the animation playback until I fixed the values again. Just having enter, or a click outside the box in the docker to confirm would be awesome.

I appreciate the efforts to update Krita’s animation capabilities, and I’m glad to assist in any way! (Late as I am)

I didn’t know you could do it with space+rmb+drag! Thanks!

Nevertheless, I still find it less accurate because of the drag function. IMHO, it would be more precise if you could do it step by step, without the need of dragging in the timeline.

There are some changes/new ways to zoom in-out in the Timeline here: https://invent.kde.org/kde/krita/-/merge_requests/311 - although tbh for now it’s not really working for me with my tablet pen, but it might be good to take a look at this in a few days since there will be probably a new build to test.

IMHO, it would be more precise if you could do it step by step, without the need of dragging in the timeline.

Perhaps a work-around would be having Space + RMB + drag produce the same function, but holding Shift at the same time would scale the timeline zoom to set increments. Eg. Space + RMB + Shift + drag to the left would zoom out to 1.5x, 2x, 3x (or a different increment), and dragging to the right would zoom in, in a similar way. This would be useful for large animation sequences, where you are constantly scrolling and selecting many frames in the Timeline, and need to zoom into numerous sections without too much dragging.

Would that be too many buttons to press? I hope it is more intuitive for the user who is accustomed to how transform snapping in Krita operates, but I could be wrong. It may be the same as holding the Ctrl key instead while dragging, but the two are pretty close on the keyboard.

I was thinking something more simple: Cmd (or ctrl) + left/right arrow to zoom in or out more precisely than Space+RMB+shift+drag (yes, too many buttons).

That’s a good alternative I think.

I’m wondering if there would be an option to skip to keyframes in the timeline, possibly by pressing Ctrl + L/R arrow? Either way the increments could work with Ctrl or Shift, or even Alt with arrows I guess.

Personally, it turned out to be extremely practical for me to use Shift+a Shift+D for frame-by-frame navigation,(not a key frame, but just a frame-by-frame, instead of the standard arrows) This allowed all frequently used keyboard abbreviations to be centered under the left hand. There are a lot of available functions, but they are too situational to assign them hot keys (at least for me), I would like to be able to “without coding” directly from the program to assemble your own button panel, similar to ConfigureTolbars> maneToolBar, only in a separate set. And as suggested, this toolbar could really fit well above the timeline, absorb the functions of the left/right inserts(in the form of icons), and even replace the animation panel.

Anyway, maybe someone said it, maybe you can cooperate with confifu who is planning to make storyboard feature:

Hello everybody, I am going to make a storyboard feature this summer ( at least for the northern half of the globe

) as my GSoC project. This is a list of mockups, features and functionalities that we have planned so far: General There would be a Storyboard docker that would show relevant non-empty frames on the image’s timeline. The frame would be shown as a thumbnail. User can paint on the thumbnail directly. Changes made to the frame from the canvas and storyboard docker…

Especially when it comes to make feature like moving camera or other fields common for animation.

Hello,
First of all, congratulations for the excellent work that has been done on Krita.
Here are my suggestions:

Everyone’s celebration of virtual cameras is dead-on, it’s one of After Effects or Toonboom’s greatest animation workflow features and they are a great boon to people who are working on storyboards and animatics. In alignment with this, it would be nice for such a camera to show the camera view as well as title-safe guides and some of what’s outside the frame of the camera (maybe at partical opacity?). It can be very easy to get disoriented working with a virtual camera if you only have the view through the viewfinder to go off of. With the camera, it would also be useful to be able to do perspective by having layers rotated to become a ground plane or have layers at different depths to do parallax.

I work in games and I am always animating loops so tools that make that easier are welcome additions. I’d love to see onionskinning optionally loop as well as having the “next frame” keyboard shortcut optionally loop back to the first frame.

Actually, a lot of my requests are onionskinning related it turns out

it’s a little slow to change onionskin settings due to the columns interface (I’d rather just have an RGBA curve), it’s hard to see onionskins if the layer has full alpha, which makes cleaning up color details hard (maybe a blendmode for onionskin blending would help?). It would be nice to be able to make onionskins for other layers a different color+alpha from the ones of the layer I’m looking at.

My background is mostly animating in flash and after effects, so I really appreciate krita specifically as a raster animation program for doing pixel work and comfortably sketchy rough animation with real illustration brushes, so I’m glad to see this continue to get attention!

Please vector animation tools (with animation curves), is the only thing that I really need from krita.

Thanks everybody for the great feedback and suggestions. Keep them coming!

Eoin and I have been a bit swamped with things over the last month, but we’ll do our best to get as much animation workflow goodness into 2021’s Krita 5.0 as we can.

3 posts were split to a new topic: Aid in coloring animation

Like many said the UI of Krita has too many huge buttons:
see below the modified example: 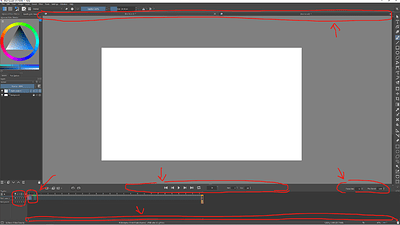 And to avoid the continuous clicking of buttons maybe it would be best to rework the whole timeline GUI to be more interactive and readable like in opentoonz / tv paint etc where you can easily select where you want the onion skinning to be straight from the timeline and create hold frames through dragging the icons left and right, its a much efficient both in terms of speed and space use.

And in the late future it would be cool to have performance improvements as the animation playback lags quite a lot.( and maybe some improvements on the fill tool as compared to Photoshop it doesn’t work that great out of the box )

Audio is really lacking right now, and until recently it wasn’t even working on some platforms. On top of all the things that you mentioned, I think that the way audio is currently handled is difficult to sync properly with the animation, so we may need to change that. We also need a waveform visualization, so that animators can also see where transients occur in relation to their frames.

There’s a ton of work to be done, and I’m sorry to say that it won’t be significantly better in Krita 5.0, because audio is something that we haven’t been able to really dive into yet (other than just making sure that it “works” on all platforms).

Unfortunately, Krita 5 probably still won’t be a great tool for lipsyncing or animating to audio in general, so please keep your expectations in check in that regard. But, for what little that it’s worth, just know that we understand that audio is pretty subpar right now and that a lot of the things you listed are big problems, and that we plan on addressing them as soon as we can. (I’m hoping in 5.1, but don’t quote me on that!)

Thanks for your reply. Its great to know that you’re working on it anyway.

The request for this audio feature has been floating around for quite some time now. I remember seeing a post by dev guy on another forum from something like year 2017 saying this feature will be in the next release (i can’t find that link now) but its been over 4 years.

I promise you, if the audio is gotten right on this app, it’ll be a game changer. Thanks either way.