Photos that those figures are based on are taken from two felina underwear magazines. (They don’t have any identifying information so I can only tell that they were printed for celebration of 125 years of the existence of the brand, which was in 2010).

I can see I’m not exactly great in drawing figures yet, hopefully drawing all figures from all the magazines I have - which is quite a lot

Still, they look quite nice to me, especially if one doesn’t look too closely, so I hope you’ll like them too. 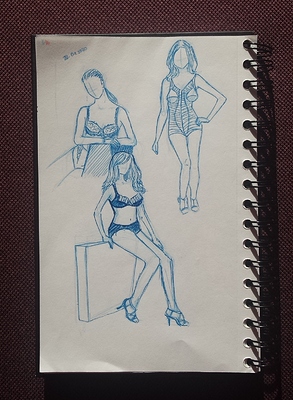 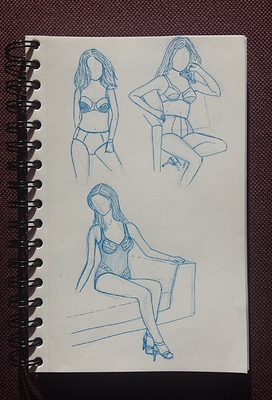 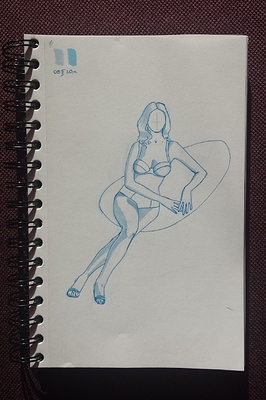 I’ve found that the quality of the photos as references can vary depending on, for example, how artistic the photographer wanted them to be… often the lightning is black/dramatic which makes it harder to see the whole figure, or parts of the figure are cut off (out of the frame).

Still, I like to draw from physical magazines much more than from photos on my PC

I still ponder over buying a fitness magazine… that would work, too. For now I have the underwear catalogues though

One suggestion I would give is to maybe focus more on the flow of the shapes, rather than the shapes themselves at first. This helps give the figure a bigger sense of the gesture and personality of the pose!

Quickposes is a great site for this, and this is a fantastic video by Proko, probably the one that helped me the most!

I’m not sure if I agree with that advice, I mean, I know gesture is important and getting the flow of the body right makes the picture more dynamic and overall increases the quality of the art, but I’m not sure if suggestion I should do gesture drawings instead of those sketches above is a good idea in my current stage.

I’m also generally against how gesture lines are often taught. General idea is that you draw a gesture line and then a body around it. Problem is, you need to know how to draw well-gestured body around a gesture line to get it done properly, because this kind of splice can mean anything - it doesn’t define any kind of edge, all edges of the body can be drawn in a very different ways around this line and there is no way of telling how to do it to get a properly “gestured” body. The exact positions of body parts around the gesture line and the line in regard to parts of the body is undefined, so it doesn’t actually help beginners at all, all it says is “the body will be angled roughly this way”, so in my opinion it’s not a good tool to get a nice dynamic body - if someone is drawing an angled body, they roughly know it will be angled roughly that way. On the other hand, if you know how to draw “gestured” bodies, then the gesture line is just a bit of a skeleton, just the same as the line marking the position of the eyes on the portrait.

As in, I don’t believe gesture lines actually work. What I think works is getting a picture of a person or seeing them in real life, first drawing simple forms, then adding details, trying to make it look as in the photo or real life. Trying to get angles correct. Starting from forms simple enough gives you some kind of a gesture too, just not a line, but an actual object that you can later “sculpt” to get the correct actual form of the human body. Which is great with Quickposes you linked - I believed that after trying it out, I found some set of 100 references and tried to draw them in class (not art class, just normal lecture).

Also note: I think if someone knows how to work with a gesture line, they can use it effectively, why not. It’s like with any other very simplified sketch - you know what those lines mean, but if you were to give it to someone else, they would make a different picture out of it, because they don’t know what exactly have you meant. The same is with gesture line, just there is only one line and much more room for errors.

@slightlyangrydodo but… still, I think you made a valid point, when learning, I should switch focus between different things I want to learn, and I haven’t prioritized the dynamics of the pose recently.

That is a well constructed criticism to my point, had never thought of it that way. Although I still believe in the power of gestures to communicate a message more effectively in terms of overall shape language, if gesture is not accompanied with some semblance of accurate proportions and shape design then it completely falls flat.

Great point you made, thank you for taking the time to write that!

You are indeed right about not needing gesture when using reference.

Gesture is something you need when doing stuff from imagination, where stuff just tends to end up looking stiff. With reference, you can always analyze the picture of the flow without needing gesture lines.

Buuuuuuut (and there is always a big, juicy but): If you don’t like gesture lines and can still get a good flow: Don’t stress about using them. All that really matters is the final result, not how you got there (unless it’s tracing :P) And how you get there should be enjoyable to you, not for the spectator