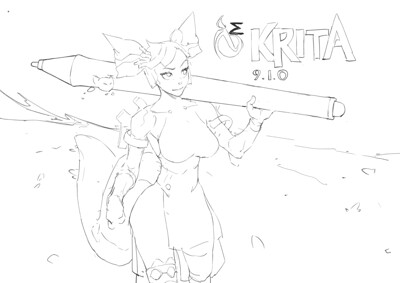 And behold this day when Krita became so powerful and efficient that it now trolls Photoshop and CSP, has come. More programming geniuses are part of the Krita community and their work resulted in a monster software that became the new standards for professional digital artists.
Amen.

I can only dream and pray for it to come true in the future.
More power and blessings to you Krita community and the awesome developers behind the project.
Thank you for existing !

Nobody : bro, finish the painting now, this is just a sketch.
Me : Aaaah… at a later time when I have more time for myself.

Funny thing is, squirrel is also the symbol of our national football team.

You say it like a joke but it’s true! It’s just that flor Krita, the grant was a bit less “Epic & Mega” than the one Blender got. Details here: Krita Receives Epic MegaGrant | Krita