Hope you are well.

All I’m trying to do is to use a digital frame template to surround my existing artwork.

Could someone give me simple step by step instructions on what I need to do?

I would suggest playing around Rectangle Tool. The neat thing about this tool is that it can use your brush to draw a frame. So you can try making some fancy brush (or use existing one) and draw several rectangles with different brushes to get some decent result you want.

Another way to go is to use Multibrush Tool. It has Symmetry type so that you can draw interesting pattern lines that will serve you as frame. The look you try to achieve it seems to me that Multibrush tool is the way to go.

Show us your results. Curious to see

Everybody here started with zero knowledge a few or many years ago so good luck with climbing the learning curve.

That frame image is 995 x 803 which is quite small and it’s not a good quality image but it’s fine for practicing with. You’ll probably need to scale it up to make it a suitable and useful size.

Here’s a simple example I threw together: 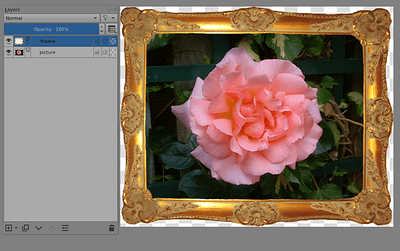 If there’s any part of what I said that needs more explanation then do ask for more details.
At this stage, I think you’re going to need more awareness of multi-layer image construction and manipulation techniques than any ‘artistic’ advice.
Either way, you’ve come to the right place for it.

Thanks for the response. Yes, that’s exactly what I’m trying to do.

I have used File to open the Picture I want to frame.

That appears as a background layer.

Then I’m not sure what to do. I have tried to do New Layer and import the Frame. This ends up with the frame on top of the picture, but it’s very tiny and seems glued to the top left of the picture…I can find no obvious way to move it separately and/or re-size it.

Some of them should have what you need.

That appears as a background layer.

It appears as a layer named ‘background’. The name of a layer has no effect on its behaviour or functionality. You can rename it to whatever you want.

This ends up with the frame on top of the picture, but it’s very tiny

So, your picture, that you want to have framed, is much larger than the frame that you’re trying to use.
You can find a larger frame picture and use that or you can shrink the picture down to a suitable size, or you can expand the frame image to make it suitably large, or a combination of those.

You’re very unlikely to find a premade frame image that has exactly the right size and aspect ratio for your picture so learning how to scale images up and down and making decisions about which if any part of the picture to get rid of (so it can fit the frame) are techniques you’ll need to learn.
They are not difficult.

If you enlarge that frame image to make it a suitable size, it will probably look bad but try it anyway:
Click on the frame image in the Layers docker to select it and then click the Transform Tool icon on the Toolbar, the tooltip is ‘Transform a layer or selection (Ctrl+T)’.

Then click on the canvas and the frame image wil be surrounded by a content bounding box, with control handles at the corners (and the middle).
Grab the lower right handle and drag it down and to the right to enlarge the frame image. You’ll be able to change the aspect ratio of the frame but if you change it to much then it will look ‘not right’ because it’s an ornate patterened frame.
By grabbing inside the box, you’ll be able to move the frame around the canvas.
Do this to make the frame almost as large as the entire canvas, then press the Return key to finalise the transform.

Then click on the picture layer in the layers docker and Transform that but instead of making it bigger, drag the contol handles to make it smaller so that it fits inside the frame.
You will probably have parts of the picture obscured by the frame or even poking out from the edges of the frame so you’ll have to make a decision about which parts of the image you really need to be showing in the centre of the frame.
(Either that or get yourself a frame image with a more suitable aspect ratio.)
Again, press the Return key to finalise the transform.

There is a bit more to do but give all that a try and let us know how you get along. Please take a full screen screenshot and upload it here so we can see what’s happening.