Is Windows the best operating system for pure canvas responsiveness in Krita?

I’ve tried both Ubuntu and PopOS with Krita and the experience was significantly less than optimal. Is Kubuntu or Neon better because of the primarily KDE environment? I’ll legitimately dual boot a different OS just for drawing if there’s an improvement over Windows.

Keep in mind I don’t mean how long it takes to do longer processes like filters or transformations, I mean things like panning, zooming, and rotating. Taking into account things such as tablet driver and polling rate, display drivers, Krita renderer used, window managing gui, etc, Which OS (or OS + kernel) has the absolute fastest real-world-pen-to-visible-frame-change latency for the basic functions?

I mainly ask out of curiosity, the responsiveness of Krita is fine as-is for me. However I had tried to move to a Linux based main desktop a while ago and no matter which I tried, I always got hung up on Krita’s (or more likely whatever other software or drivers were to blame) performance on them.

To my experience in windows it just is faster and manages the bottleneck in signals way better. Not to mention you have better hardware support there for some tablets.

I tryed a couple of distros and most are bad and quite slow the best I managed to use was Kubuntu.

Not sure about responsiveness, though it is definitely (dare to say) stable OS for artwork in general.
The thing is creative job does not end in Krita there are plenty of other tools made my individuals that might be helpful. And sometimes they are only for Windows.

Another thing is drivers for tablet. To get most out of tablet it is better to use Windows (because of additional software that comes only for this OS).

So yeah. I think it does not come down only for canvas responsiveness

TL;DR:
Using Krita on my 10 years old Windows/Linux computer works like a charm be it on Linux or Windows, just avoid MacOS

When switching between Windows and Linux I always get that placebo effect “oh this is faster” like a child wearing new shoes and thinking he runs faster…Yet I still feel more comfortable on Linux in the end.

But for MacOS, man…I would draw on Windows 3.11 and not use MacOS. There are a lot of issues on MacOS about OpenGL and that makes my experience a living nightmare.

I am also in a similar crossroads whether I will continue to use macOS or switch to Linux. I get really good help here to configure my tablet the way I want. Thanks for that. But change my whole OS just to run Krita better? I can’t get excited about it at the moment.
I use linux in a vm since 10 years now, and in my childhood i compiled my whole linux with gentoo for a few years.I have also configured and compiled the kernel myself x times. I want to say that I know linux very well, also the terminal and configs.

But I will probably never use linux as main os. Simply because of the missing drivers and performance for other stuff.

Ow… sorry for this off topic.

By the way where are this opengl issues on macos? I never saw once. And my performance is the same like linux.

You cannot disable Windows’ DWM compositor, so that will always introduce a bit of a performance hit, but that goes away if you make Krita full-screen.

@IvanYossi and @dkazakov are getting close to improving the opengl performance of Krita on macOS and HiDPI screens in general. When that lands, we’ll send out the second Krita 5.0 beta.

Use whatever your like. it is a subjective and personal matter. There will be thousand different reply to your questions. Give each OS a try and evaluate yourself. Sven if the majority of people here would suggest you something you might end up hating that option. it depends on your hardware, personal taste etc.

I never really used Krita on Windows much. All I can say is that I never felt any unresponsiveness on Linux (Manjaro with KDE) as long as canvas acceleration is enabled, if it’s there than it’s unnoticed by me. But I use a powerful workstation, wich probably compensates performance issues in Krita to some extent.

Out of curiosity, the OpenGL improvements on macOS will also be visible on the newer M1 models?

They will be there, but you won’t notice it since the M1’s vectorization extensions are not supported yet, so the brushes will be really slow in any case.

Isn’t the composizor also turned off by default in kde plasma when krita is running fullscreen? I thought that the apps can control this for fullscreen?

Yes but kwin allow applications to request to block compositor, since a few years. Then kwin blocks compositor if the app request it, not the app itself. That is what i mean. Is it not requested by krita for full screen?

It may also be that I have misunderstood something. Than sorry for the question.

I knew it, so I’m not crazy. There definitely is more latency when not in fullscreen mode.

I would be intrested to hear more from you about: “If you running a window manager where you can disable the compositor”.
I am was on Kubuntu but switched to day to Linux Mint. Can you tell me what is meant with the window manager? And how to disable it in Linux - Linux-Mint?

It would be help full to understand this for me,

@KritPopCha It depends on which desktop environment/manager you’re running.
With MATE (originally based on Gnome 2) I have this utility: 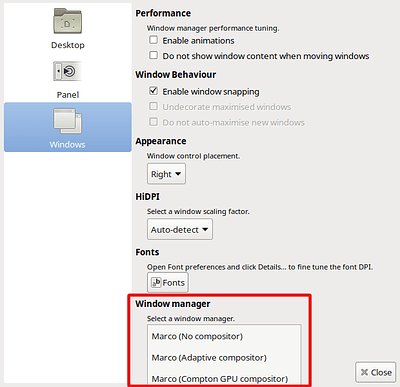 If you say which desktop environment you have, someone may be able to give you advice and directions.

If you say which desktop environment you have, someone may be able to give you advice and directions.

My desktop environment is “Cinnamon” >>> Linux Mint 20 “Ulyana” - Cinnamon (64-bit).
With the help of your screenshot I have a idea where to look.

Tanks for your service!

Witch window manager, this is what I found:

From a terminal. run neofetch and it will tell you.

I use Garuda on my laptop and windows on my desktop. And I feel Krita is more responsive in Garuda than in windows.