I posted the latest video of a series I have created on Krita’s tools. All the other videos are on the channel obviously. I need your feedback. DID I FORGET SOMETHING??? I feel like I forgot to mention another way we can warp. I hate that feeling. It’s like in the back of my head and I can’t get it out. PLEASE, LET ME MAKE THIS CLEAR!!!

I am not asking you to subscribe to my channel.

I need my fellow Krita users to tell me if I am doing a good or bad job. And please, let me know if I can help you too. We need to support each other!!!

This is the link to the video. Watch and be merciless. I need to know what I am doing wrong, or what I missed. THANK YOU! 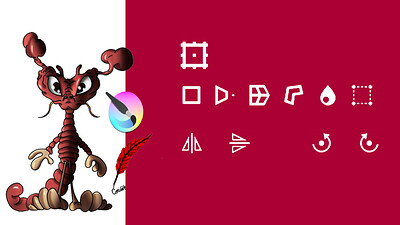 I watched your WARP MODE tutorial video yesterday and it’s very good, as are all your krita tutorial videos.
Your use of graphic overlays is helpful and not overdone. Your presentation and pace is very comfortable.
I’m looking forward to watching more of these.

Watch and be merciless.

I do have a small amount of (constructive) criticism for your Selection Tools and Free Transform Tools videos in the same series if you’d like to hear them. It may take me a while and I can present them as a reply to your topic about the Selection Tools video if you like, or I can add my observations as further replies to this topic.

Hello and thank you for your message!

This is what I have been looking for. Constructive criticism. I need to make sure that what I share on Youtube is not only accurate but precise as well. The viewers need a place they can trust and rely on.

There are so many tutorials out there, but they never talk about ALL the option tools docker’s actions.

Some functionalities in Krita also, and I hope you will agree with me, don’t really make any sense to me.

I use them, and don’t really see what they do… nothing much is happening. For instance, the “adjust granularity” function in the cage mode of the transform tool… Do you understand its function? I have tested it, but don’t see much happening. This is coming in the next video on Monday.

I am sure I forgot plenty of things in my series of videos because there is so much you can do in Krita, and your input will be so helpful. So thank you in advance for your future e-mail. I am sure I will learn a lot from you.

There are many things that I don’t fully understand (especially in the deep and detailed area of colour profiles and colour mixing) but I generally assume they are there for a reason. The best way to figure them out is to play with them or ask about them here on the forum where experienced users and also developers hang around (when they have free time).

As for the Cage Transform granularity, I can’t understand what it does either but that may depend on the type of image that is being transformed e.g. lineart vs a photograph.

I am sure I will learn a lot from you.

Until I watched your video, I didn’t know that you could select multiple Warp anchor points and move/rotate them as a set, so I’ve learned from you. Your tutorial videos do work well

Here is my merciless criticism of the Selection Tools video. Two points:

At the end of this video, you presented and explained all the selection tool Actions. I think this would have been better done at an early stage.
When you demonstrated making simple selections, the Action was set to Replace. At 5:13 with the dog, you select a single region with Action set to Replace, then at 5:26 the view switches to a canvas only presentation of the dog and you select both eyes for moving. For this you must have changed the Action to Add but did not explain that.
Any beginner trying to follow the tutorial by pausing the video and copying what you showed would have not been able to select both eyes. That would result in confusion and frustration.
Selection of multiple regions continues throughout the video.
At 6:47, you do show the Tool Options docker with Action set to Add but it has been moved further down the screen and I can’t understand how that happened. Later on, the Tool Options docker is back to being as it was at the start.

(I realise that the video would have been recorded over several days and you may have changed workspace for whatever reason during this time.)

Throughout the video, you use the word ‘scroll’ to describe selecting an option from a menu list. This is not ‘scrolling’. Scrolling is about revealing content that is above the top or below the bottom of a list window and is done by rotating the mouse wheel or by click-dragging on the scroll-bar at the side of the window.
A good example of this is the Brush Presets docker where you have to scroll through them to see all of them.

You didn’t cover the difference between Raster selection and Vector selection and all the other wonderful things you can do with selections but that would have been far too much to fit into one video.
Maybe do those in a future and more advanced tutorial?

I’ll post another reply in this topic with my merciless criticism of your Free Transform Tool video, only two small points there

Replied by email. Hope you got it.

If you mean a private message, by clicking my username image, then no.
It’s ok to post long replies in the topic and we try to keep things public where possible to get information to everyone.

And this is why we need another pair of eyes and ears to help. I guess, and this is not an excuse, but rather a fact… I have been looking and working on the video for so long that I become blind… This is why I asked for help. I am so afraid I missed something or that my English was so bad that I communicated something wrong by accident. Also, I will bet you anything, that the parts regarding minutes 5:13 and 5:26 were erased by mistake during the video editing process,
I am far from being an expert on video editing, and I am still learning as I go. You, catching these moments is so important. This means I will have to be more careful editing my next videos. So point taken and greatly appreciated.
I thought that scrolling meant to move down inside a drop-down menu. So, thank you for correcting that.
Thank you again. You are amazing!

Thank you for your kind words but not really - I have very many years experience of doing formal reviews of technical documents (in environments that were far less friendly and welcoming than this forum) and your videos are technical documents. It’s quite easy for me

You mustn’t be afraid of making little mistakes or missing anything out.
The key point of tutorial videos for beginners or intermediate users, is to show them nice and useful things that can be done and then they will do it.
If they’re going to be any good at it anyway, they’ll start to figure things out for themselves after a short time and then only need little nudges to push them along the road to skills and experience.

You’re not working to a specification, a contract, a schedule or delivery deadline so relax and do what you want to do in a way that you enjoy.

At 2:26 you introduce ‘#4 - Perspective’ and demonstrate what you call “perspective skewing”.
It does give the appearance of the image perspective being skewed but it’s not the Perspective transform, which is a different and separate thing.
It’s actually simultaneous rotation about the ‘x’ and ‘y’ axes. Mouse/cursor movement up-down gives x-axis rotation and movement left-right gives y-axis rotation.
If you select the Rotate button in the Tool Options docker to show the rotation sliders, you’ll see them both moving around as you do the Ctrl+dragging.

The eight places around the bounding box are usually called ‘handles’ or ‘control handles’, though people do use other ways of refering to them.
(I think ‘node’ is a separate and more specialised word used in other areas such as the mesh transform.)
The word ‘widget’ is used to describe a distinct element of the user interface but you’d need a developer to give a full explanation of that.

You asked for merciless ctiticism and I’m very happy to give it because I know you’re aiming high in your work.
Your videos are already very, very good but please don’t stress yourself in trying to achieve perfection

You did what I have asked for and I am so grateful. Merci de tout mon coeur. I couldn’t find the proper translation for the terms you mentioned and I used what I thought were the words the closest to what I was trying to describe. So, thank you for the update. I am writing this down as I keep a journal of technical terms for me to remember and use in my videos. When this series of videos is finished (I have three more videos coming up: one for the cage, one for liquify, and one for the mesh), I am thinking to make a short video where I will properly tell everyone that I used incorrect terms and that these are the ones I should have used. Or, maybe I will put a statement in the next series I am about to create. The new series will be on the rest of the tool left in the toolbox.

WHY WOULD I DO THAT??? When I watch Youtube tutorials, I expect the best. Doesn’t everyone? Therefore, it is my duty to update my viewers and tell them what I did wrong or say wrong. Plus, it will be nice to pop up for a few seconds to say hello. I think people need to see their tutor once in a while.

And regarding trying to achieve perfection… Don’t worry. I am not, as I understand that perfection is a moving target. You can aim at it all you want, but you cannot really hit it. My aim is to create tutorials that people can rely on and trust. I think it’s a good and reasonable and realistic one.

Cheers.
PS. By the way, do not worry about me asking you to look and analyze my videos every single time. I am releasing you of your duties. LOL. However, if you happen to see something so bad or totally wrong or want to say hello, please feel free to do so.