krita 5 - buttons of play and stop are overly to the left. since I am right handed it really felt out of my way. 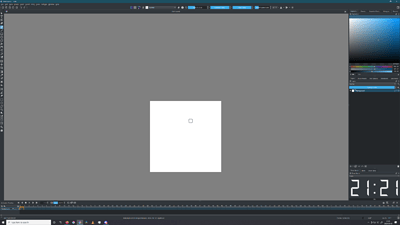 my suggestion would be just to tweak it a bit so it is more at the center like this. 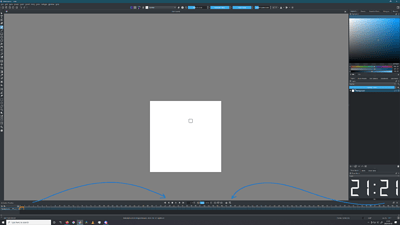 Regardless tons of working space now it was very scalable the window. One way or another I like it.

I already gave a feedback about these buttons few month ago.

Hi I know that Krita 5.0.0 is still in prealpha and 2 developpers are working on this part. But I already have some feedback concerning changes made on animation timeline docker. Maybe these point are already fixed on developper’s side, or not… Here interface in Krita 5.0 [image] Some interface elements have been moved in docker title bar; this is a good idea to improve UI space

(2) Oignon and menu are far-far away than other buttons…

Well, the basic idea is to present the most commonly used workflow items (the buttons that we press most often as animators) right out front while moving the set-and-forget configuration widgets into sub-menus. We could have aligned the sub-menus to the left, but I think it’s more of a clear design to put actions on the left and sub-menus on the right. Eventually we will be moving other sub-menus, like audio, over there as well so I think the design will become more clear over time.

Please give it some time to grow on you, and if it still bothers people a few versions in we can always change it.

So maybe, if we are more than 2 thinking these buttons are too far…

I’m still not sure how I feel about certain settings being put behind a dropdown and certain buttons being removed… I didn’t even realize the stop button also served as a first keyframe button until having to reread that thread closely.

I have to agree, the buttons in the animation timeline are not optimal. I’d really prefer to have the autokey menu next to the add/remove keyframe buttons.
And I change the end and start frame all the time, that’s no set and forget to me, especially when I am testing out timing etc… ( although I just discovered that I can enable shortcuts to set those. that’s great.)

Selection loop is also really nice. But I find it quite cumbersome to actually do a selection.
→ Feature request: make it so that it is possible to drag across the top line (where the frame numbers are) to select all visible unlocked frames below. (like in blender)

(sorry for the slightly off topic stuff, is there a dedicated thread for animation development topics/ feature requests?)

@tom I didn’t know that either. thanks for the trtick. (just tried it out. if you have a selection, it will jump to the start of that - ignoring keyframes. neat)

[I want to preface this conversation by reminding everyone that we’re in the beta period for Krita 5.0 already, so it’s unlikely that any user interface stuff will change in the short term. For the most part, the way things are right now are the way they will end up being in 5.0.]

(@raghukamath Thanks for the notification. I’m late because I just don’t check KA as much as I should, considering how popular it has become!)

This has been suggested before, as that’s the way Blender does it.

I’m not against it exactly, but it’s kind inconsistent with the rest of Krita’s design language. Since we don’t have a lot of centered GUI in Krita, it wasn’t something that we originally considered.

Well, I’m not 100% sure about it either, but the general philosophy behind the design was:

Of course, these are all totally subjective and we can debate or discuss each of them. But those are the main reasons why things are the way they are right now (and will be that way in Krita 5.0 too). I think when Krita 5.0 comes out we will get a good idea of whether people agree with my design philosophy or not.

@ogonek I’d really prefer to have the autokey menu next to the add/remove keyframe buttons.

How often do you actually find yourself switching autokey mode, because for me I find that whether I want to use autokey (and what mode) is mainly dependent on the subject/type of animation that I’m working on? It could be that our workflow is very different, so maybe I’m just not seeing it.

And I change the end and start frame all the time, that’s no set and forget to me, especially when I am testing out timing etc… Selection loop is also really nice. But I find it quite cumbersome to actually do a selection.

This makes it sound like you’re using the start and end settings as a sort of workaround, while the real issue is that you find it cumbersome to make selections. If that’s the case, I’d much rather try to improve how we handle making selections on the timeline than move more widgets into the high-traffic area.

sorry for the slightly off topic stuff, is there a dedicated thread for animation development topics/ feature requests?

I don’t actually know… I should! But I don’t…

I switch autokey mode quite often but this wasn’t really a feature/change request but more of an agreement to the OP that I’d also like some fetures to be closer to each other or more accesible.
But as long as there is the option to connect it to a shortcut I don’t really care that much myself.

about the selection: I’d like to drag the cursor along the top row with the numbers and select all frames below. that would be neat.

As for the cloned frames. if I select one keyframe with siblings, I’d like to have a visual cue on all of those. whatever that is. a star, a different shade, the origin frame number…
thanks for replying.