Hi, I just started using Krita 5.0 today and have noticed a few rather annoying bugs. Before using this new verson of Krita, I had used the 4.0 + versions and didn’t have these issues.

As I was using the app today, the cursor on the screen lagged quite a bit. At first, it was just slow. Eventually, however, the cursor would disappear from the screen until I physically touched the tip of my pen to my tablet. I restarted my computer and re-plugged in my tablet and the issue persisted with bad lagging and the cursor disappearing. It was getting so bad I couldn’t even draw on the screen properly.

Another issue I noticed is when I use the move/transform tool, the cursor appears as a large black or white box. This doesn’t happen every time I use the tool, but it has happened a few times.

I just wanted to know if anyone else is having these issues?
Like I said before, I have used Krita before and not had these issues until using 5.0 today.

Edit: every time I open krita, the cursor will completely disappear and reappear from the krita screen and is very choppy. I am completely unable to draw properly because of this issue.

yes, had the same cursor disappearing and reappearing in and out of the workspace. Let me back up… This morning 1-6-22 I had version 4.3. something which when having the disappearing cursor and zooming in/out (mouse buttons and keyboard commands) as well as panning not working unless I selected a brush or other commands, then the zooming or panning would respond. This made me upgrade to version 5.00 and still having the same issues.

Hello @Gcainap and welcome to the forum

… and zooming in/out (mouse buttons and keyboard commands) as well as panning not working unless I selected a brush or other commands, then the zooming or panning would respond.

There is a formal bug report for that problem:
438784 – Panning and zooming bug in Krita

It has been discussed here on the forum:

Krita is dropping keyboard inputs (or it's something else)

Is there also one for the cursor disappearing? Because I literally cannot draw since every time I touch my pen to the tablet I have no idea where the cursor will end up.

@sketchwolf_1 What are your cursor settings in Krita? (Settings, Configure Krita, Cursor tab). 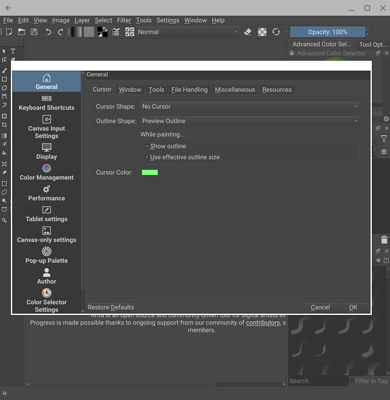 If the “Cursor Shape” is set to “No Cursor” and you use a pressure-sensitive preset, then your other settings, especially “Use effective outline size”, will display the current size of the preset when you place it on the canvas, and this often ranges from tiny to non-existent to begin with and will rise with more pressure and the “footprint” gets bigger. This is a logical consequence of the settings. For non-pressure sensitive presets, the currently selected size should be displayed, shouldn’t it?
Choose crosshair or little circle as a cursor to see where you are, it shouldn’t be too distracting.

Here is a video of the issue to help people understand: On the left is a normal tab for comparison since this issue is only happening on the krita tab and isn’t due to my drawing tablet itself. In the video, you can see the cursor skipping across the page and reappearing in various places.

I can’t see your video but I did find an old Reddit post that might be relevant. The person’s cursor was jumping and skipping around. He describes how he solved the driver problem. I hope it’s helpful. 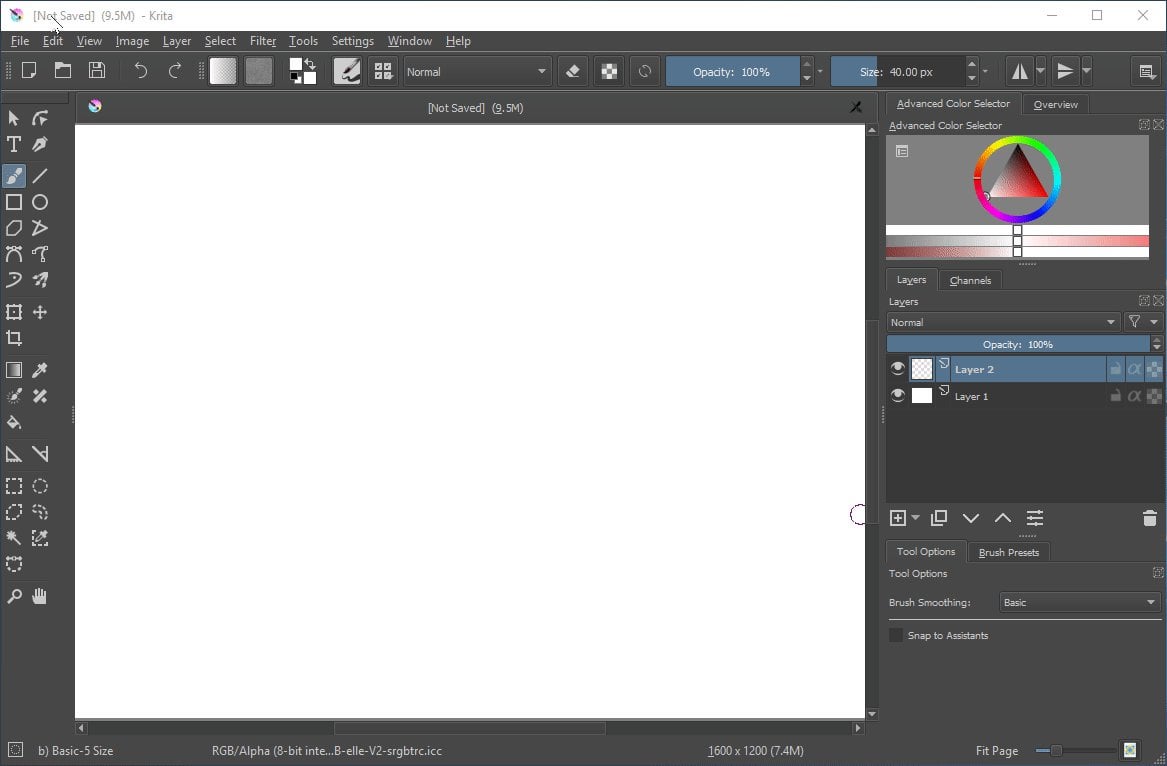 Can right click on the video → save video as to download it.
The OP’s problem is when finish a stroke, the brush outline stay at the end of the stroke, even the stylus is moving to another place, then the outline jump to the place when a new stroke is making. The outline only move during a stroke is making.

I’ve seen this behavior in 4.4.2 on Android tablet

Yeah, the tablet I’m using is a One by Wacom, on a chrome book. It doesn’t use a driver, so I don’t think that’s the issue. I have the Krita Program downloaded through Linux. I didn’t have this issue before the program updated to 5.0; it worked perfectly fine before.