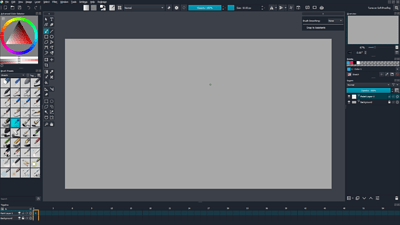 I have a storyboard project that I need to get to, but ended up procrastinating by trying to make Krita look better on my system (because I’ve become too spoiled by Clip Studio Paint lately).

Ended up following wojtryb’s tutorial on modernizing the interface, but with my own twists. (I hate how the “Flat Theme” of the addon looks, so I just turned it off entirely, while keeping the rest enabled.)

The entire workspace is to help me use Krita exclusively on Wacom One display tablet, without shortcut keys, so there’s a good chance I might change things around later. (That’s also why I have a “Softproofing” button on my toolbar, to quickly toggle greyscale on and off to check for values, as well as buttons for keyframes and onion-skinning.)

But yeah, thought I’d share it all here in case anybody wants to copy what I did here.

Looks great. I love how customizable Krita is.

Looks sleek. Definetly will try out and tweak for my ergonomic needs.
Thank you for sharing