Need a keyboard panel for Android

Maybe a customizable keyboard panel will let users choose which keys or combinations to show in the panel.

I think i understand what you mean but having a full keyboard displayed in krita on a tablet sounds like would make the screen even smaller than it already is. I also don’t think just showing some keys on a docker would be helpful.

Right now, we have the touch docker that has some buttons that are shortcuts to functions, i think this could be a better approach. Instead of showing the the keyboard buttons show buttons for the functions you want shortcuts for.

May seem the same but i don’t see a point in having the keyboard shortcuts being the button labels. The functions would be much more intuitive.

I don’t know how customizable the touch docker is , but maybe some improvements on it might help in this request.

Yes, I know it would take some space on tablet. If the ctrl,alt,shift,straight line(V),etc keys can be placed in touch docker, it will help a lot.

I would buy a small Bluetooth keyboard and be good.

Yes, that’s a quick solution for this. But there’s some problem when I use bluetooth keyboard, the virtual keyboard of android system will showup all the time.

i think for these keys there are other problems. the way they work is while they are being held down their function is active, different from shortcuts like / or e that you press just once. I dont know how that would work in the touch docker, i doubt that holding down the key and continue drawing will work with things like palm rejection, so a toggle would need to be simulated. In a scenario like this the bluetooth keyboard would be better.

Yes, that’s a quick solution for this. But there’s some problem when I use bluetooth keyboard, the virtual keyboard of android system will showup all the time.

thats an android configuration if i am not mistaken you should be able to disable that in the system configuration.

thats an android configuration if i am not mistaken you should be able to disable that in the system configuration.

As far as I remember, it is/you can.

Autodesk skethbook can do the trick on Android devices. Holding the function button on left and slide it up/down, you can pick brush/color/layers on right side. 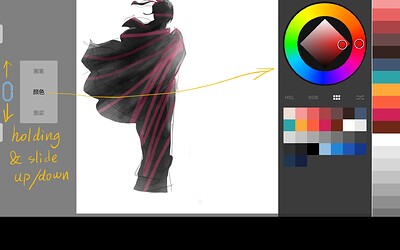 As for the android configuration, I’ll try it later.

For example, set the virtual button to Ctrl+Z, or the middle mouse button+Shift. (And they can be set without a real keyboard.)
They are then displayed in krita and we can trigger shortcuts by clicking on these virtual buttons.

The number of these virtual buttons can be increased or decreased according to user needs, which can avoid taking up too much screen.

These virtual buttons can also be placed horizontally or vertically in a waiting manner.

I also wish krita could have it.

In beta android builds ( krita 5.1) we have tons of customizable gesture actions ( plus s-pen air actions ) with these you can set up workflow even faster than a standard pc keyboard setup.

The virtual buttons would come in handy indeed because not all SPens are supported for the air actions because of the need to turn off the inbuilt air actions of the system. (The info on the SPen actions in Krita says it only works for the note 10, and tab S6 tablet – I use an S7 tablet)