Can somebody please tell me how to get photoshop brushes into krita ?

Hello @RandomHomosapien3, and welcome to the forum!

From Photoshop brushes, you can only use the (their) brush-tips in Krita, they do not show up among the original Krita Brush Presets. They are imported via Krita’s resource-management, which you will find in Krita under “Settings” >> “Manage Resource Libraries…”. After the import you can assign these brush-tips to existing brush-presets, or you can create a whole new brush with them. In both cases you have to find the right settings to mimic their behavior from Photoshop.

Thanks for the reply.

I tried what you said, but the brush tips dont seem to show up after I imported the brush pack ? I am a novice so sorry if I am doing something wrong 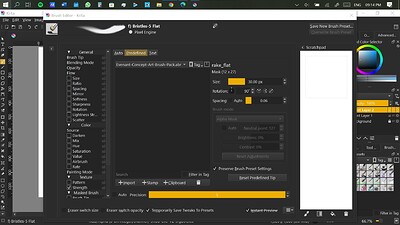 Addendum: I’ll be here for another 25 minutes or so and won’t be back for another 2 hours or so (if I don’t fall asleep before then, had a busy day).

They are free and you can get the pack here:
Free Concept Art Brush Pack for Photoshop | Evenant (slow 38 MB download)
You need to give an email address but I’m sure you have a disposable one

I can’t get them to show via a Bundle Import or by Resourecs Import but the name of the pack is in the dropdown lists.
The pack file is in the krita resources folder.
I also can’t open it as a standard archive file, which is not surprising.

They are free and you can get the pack here:

Interesting, according to this @RandomHomosapien3 seems to have already asked for help with this brush pack via another channel.

I took the liberty of making this file usable for Krita. It was made for a newer Photoshop version and just needed to be converted.
You can now download this file from this address for the next 12 hours

, after that I will delete it.

Krita ABR importer doesn’t seem to work with brushes created in CS6 or later versions of Photoshop. It will import but no brush will appear. Other programs like abrmate also don’t work with newer brushes so i can assume adobe changed something in the format. In this case there isn’t much you can do to import them unless you find a program that can extract the brush tips from newer ABR files

At least from my experience i have no source for this but i tried and some ABR files just doesn’t work, all that didn’t work were made for newer versions of Photoshop.

I converted it with abrMate, and it works here on my site, you can download it from my link above. Is it possible that you are using abrMate 1.0?

No idea i haven’t used it in a while and i found it in some obscure place on the internet i don’t even remember so probably not the most up to date version either.
To be honest i didn’t even read your response, i was just trying to explain the behavior op was experiencing from importing and finding nothing. Good to know that it’s possible to make them usable and thanks for providing it.

Thanks for this. I downloaded them and was able to import them into Krita on the Android version.

I at first imported by using the Manage Resources feature but they didn’t seem to show up so then I tried it another way: I went into the brush editor and used the +Import button and then searched for them and then I saw them. (I probably imported twice then, right?) I wasn’t sure about the correct way to import them.

Anyway, they look great and I’ll be assigning them to various brushes that I like the behavior of.

An “abr” file can contain more than one brush, maybe that’s why other programs can’t read it very well…

I have some old brushes of mine, most of them I had done in version 7.0 of Photoshop, some were newer. Just out of curiosity, I tested opening it in Gimp, here is the result: 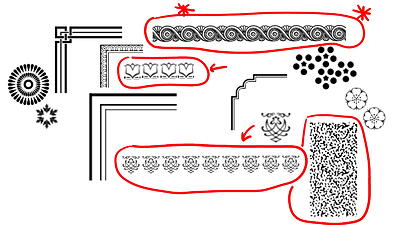 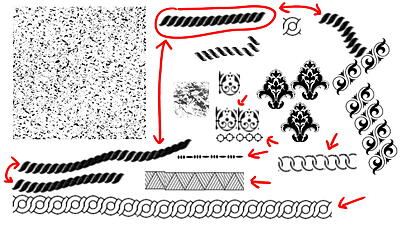 The brushes marked in red were for creating borders. In Photoshop, when I dragged the brush and held the Shift key, the brush was applied correctly in a straight line. In Gimp this doesn’t work unless you do the following:

In the first image, the border marked with * was applied like this.

Another problem: some brushes are in bad resolution, while others are acceptable. Depending on the type of brush it may be better to vectorize its shape in Inkscape and export as “png”, instead of using it directly in Krita…

Yup, as mentioned by others, importing PS brushes in to Krita involves you extracting the brush tips/and textures if any for that brush, crate a new brush in krita and manually adjust the settings in Krita to get something similar. I’ve had some success with this but sadly it’s not a 1:1 copy and it’s time consuming when you get a cool PS brush set online and moving that to Krita. If I were like 10 years younger when I had nothing better to do I would take the time, sadly time is the most valuable stuff out there.

sadly time is the most valuable stuff out there.

You are absolutely right! So it is!

Therefore, and since there are at least 4000 brushes that are available for Krita, that can be used directly by Krita’s brush engines, I rarely understand why it must necessarily be this or that Photoshit brush set.

However, the lack of understanding gets bigger and bigger when I see in how many PS brush sets the same, and not just similar, actually the same 100% identical brush tips are used over and over again. It seems as if it is part of good manners in the area of “closed source software” to steal and copy, come hell or high water. For fun, if I were to unzip all my PS brush sets into a directory and then remove the duplicates, I’d be left with 40% at best, if that. But that would be another waste of precious lifetime, even if my wish to live at least 100 years would come true.

Imagine board can detect visually identical images inside a folder if you have the brush tip resources already. Bigger the folder the longer it takes but it is better than checking by hand. It runs in the background as you do other things so multi tasking~

I think I partially understand it, most have used PS so people are used to making brushes there, although in the end it’s a bit funny because many artists prefer to use basic brushes, I think Krita already has many good brushes by default and several creator by the community are very good too.

Another thing is that at first the Krita brush editor is a bit scary but reading the manual and experimenting a bit later you understand that it is super easy to make brushes.

@EyeOdin, I would probably use a software/plugin like Imagine Board only as a second pass, after a file comparison with Total Commander, which finds identical files faster. Only then would I use software that compares by visual similarity.

@SchrodingerCat, I actually find it much funnier how arrogant (or stupid) people are. They use Krita, and think they can use PS brushes just like that in Krita, that’s like me switching from Mercedes to Rolls-Royce, and think now I can put my motor from the Mercedes in the Rolls-Royce. Presumably, users all stop reading after they read the word “Brush” in the manual under “Loading a Photoshop Brush”.
Wow, yay, I can load PS brushes!!!
The rest of the description and limitations are no longer noticed.

Of course, it may have been the passage “Can Krita load Photoshop Brushes? Yes, but there are limitations” where upon reaching the word “Yes” the mind went blank or the user became illiterate and forgot to read…

These people won’t reach the chapter with the resource libraries anymore.

Bold of you to assume they read the manual XD. Many don’t read it and just assume they can, i think this is clear when you see people asking how they can import procreate or csp brushes in krita.

I understand that not everyone has a technical level of understanding how things work but it’s a bit frustrating that some people don’t even try to look for the answer on their own first.

Though i guess the terminology krita uses for brushes and presets can confuse a lot of people cause to many they read brush they expect the preset not the brush tip. Even though it’s well explained in that page that it’s the tip/texture…

But i guess i am just writing down my thoughts at this point.

it compares visually identical images too? wow. very fast! but, kind of a hard setup.watching video

Up to 200 files or so Imagine board still seems pretty viable by the looks of it. Detecting for the whole pc is so strange, mine only checks for the list of files or folder given. Drag and drop really makes it faster to select things to check I think. Setup was always something that annoyed me a bit on these programs. if I knew how to make it faster I would but with python/pyqt5 I am not sure if I can :\

I will keep this noted for later. I might need this someday.

No.
TC compares them in a two pass run, first all files of the same size are identified and then these are compared bit for bit, but it can not compare them visually (as far as I know (maybe there is a plugin I haven’t heard of to date)). This is done very fast, because such a comparison is simple for a machine. And after this, I would use Imagine Board or any other software that can compare pictures for visual similarities on the pile of files that are left. This is faster than to rely only on software that compares visual similarities, especially on large amounts of pictures.

oh I thought the bit by bit comparison would get the visually identical information in it too. I was miss interpreting it then.