Description:
Krita’s canvas rotation’s gizmo is currently bound to the center, which means no matter where on screen your cursor is the gizmo remains in centre. This means that to rotate canvas the cursor has to move across the whole screen for a full 360° rotation or you have to move the cursor closer to the center of the screen to use shorter circular movement for the rotation.

This plugin introduces a new shortcut and a semi-new function which utilizes Krita’s original canvas rotation but instead of having window/screen as a centre for the rotation gizmo the cursor’s position at the moment of shortcut activation is utilized as the gizmo’s centre. 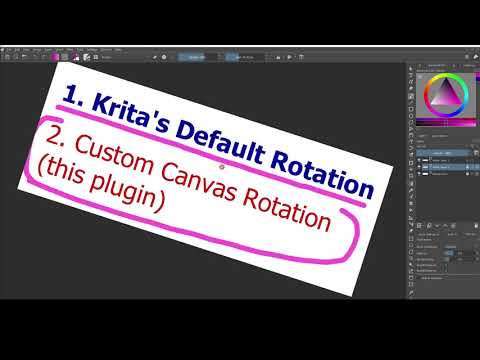 Link to the plugin:

Plugin for custom canvas rotation in Krita. Contribute to viksl/krita-plugin-custom-canvas-rotation development by creating an account on GitHub.

This is linked to the feature request I made:

Hopefully, this will demonstrate the functionality well to be considered as a feature one day in the future

for now I created this as a substitute.

I tested this on keyboard, pen buttons, pen display buttons on win 10 in the latest stable Krita version 4.4.1.

So far I haven’t encountered issues (which I haven’t solved already) but I’m limited in way I can test this.
At least for now it seems to work just fine for me on my system.

I should note I’m not a python programmer at all, no exp with pyqt or krita’s development so if someone finds their way here and thinks there’s a way to improve the code feel free to leave a comment or two ;0

12 Likes
Canvas rotation offset
Canvas rotate centered around where the cursor is pressed instead of just screen center as another option to rotation
nickgeneratorfailed November 25, 2020, 9:45pm #2

I just updated the plugin to let’s call it a v 1.1

Briefly: works with both left or middle mouse click + some performance benefit + animation is now smooth

Added a circle icon to indicate where’s the centre of rotation while rotating canvas.

I had some time on my hands to check it out and I think you did something really cool. Congrats.
I really was not aware of how much your able to do with extensions. Dockers are a bit their own little islands and this is so encompassing. I am still amazed.

I just had some minor notes I would like to perhaps bring to your consideration.

Thanks a lot, I actually think the dot is a big thing too xD. It changed the feeling so much hehe.

In my next plugin I’ll be positng here probably tomorrow I’m changing the approach with a video. Though it’s a pretty long video so I’ll probable make 2 one just to showcase it and the other thel ong with explanation :-).

The krita manual, hmm. I completely forgot about it. Heh. Thanks for bringing this up to my attention I’ll add it with an update.
Now I kinda need it for me new plugin too but I’ll do that one later…

Thanks a lot. I actually have your plugin installed but the code base is so huge that my brain melts going through it hehehe.

oh neat I will curious to see what it is about for sure. I also feel a bit inspired after watching your stuff to do a new plugin it is like a big door opening that I thought was closed for the longest time. Extensions really are something.

oh yeah. you and me both. most of the time I have the feeling I really don’t know what I am doing and that I have no recollection of it either. I just know the internal schematic that is a bit weird. I have 2 points of contact with krita (read and write) and after that things go down the code like a waterfall affecting the pyqt5 until it can’t run more without a new cycle.

I’m wondering if it could make sense for the anchor point to be where the user last drew a stroke?

Also, can this add-on work with just pressing middle mouse and nothing else? Thanks.

Hm, not sure about the last stroke, I don’t think that one would be particular sought feature but I do plan to (if I find a proper way) change the zoom so it zooms to where your cursor position is rather than simply the center of the screen since it feels more natural (it’s also the way Krita’s zoom works but I haven’t found a smooth way to do it at the time I was making this plugin).

This is more of a Krita devs feature request stuff so if they ever allow it it will be possible so I’m sorry but I don’t think I’ll be adding mid mouse button since it would just bring more problems but you can always ask in the feature request here on this forum.

Oh Wow Exactly what I was looking for!! THANKS!!

I’m wondering if it could make sense for the anchor point to be where the user last drew a stroke?

I would definitely second this as an option, also something I was hoping to find. But if not then the cursor would do for now, but last stroke would be real nice to have.

Yep the screen center is even the description that’s all it does, this plugin allows you to have less of a cursor movement.
I’d like to eventually get through with the rotation around the cursor but no promises right now, not everything is possible with python in Krita

Also I’ve been having some tough life events so I haven’t been updating my plugins for a while, I did not quit just need more time before I get back to it.

I’d like to eventually get through with the rotation around the cursor but no promises right now, not everything is possible with python in Krita

Also I’ve been having some tough life events so I haven’t been updating my plugins for a while, I did not quit just need more time before I get back to it.

All good bud, sorry to hear about your troubles, I know the feeling, big challenges this side too. Don’t worry about little things like plugins, always a workaround. Take care.