Here’s something I wanted to draw for a long time. PWN is a comic made by Donald Ahé. Donald drew one of my characters a while ago, so now I’ve returned his favor.

PWN is a hero who busts video game characters that appear in our world. I like the concept, and finally I hade time to draw this fanart. How many character do you recognize? 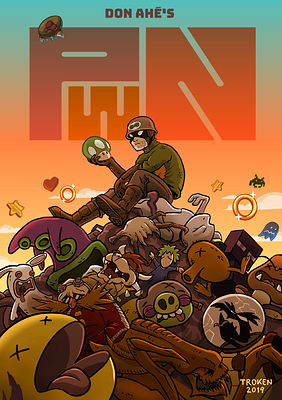 9 characters + 3 objects
I like the way you drew Baldy Mc Nosehair (aka. Eggman aka. Dr. Rrrrrrobotnik)!

He was fun to draw, but there are so many versions of him, so it was hard to choose one.

I think it’s best that you went with this version because it’s the current one.
The one where he is all round is his old (“classic”) version.
The version in the comics and the versions in the old TV series e. g. The Adventures of Sonic the Hedgehog are not even canon.
And the Dr. Eggman in the Sonic Boom series isn’t canon either because Sonic Boom in general is a Spin-Off.

Just that you know ^^

Cool, I didn’t know, but that’s nice to know I picked the right version!