Random crossover fanart because I do 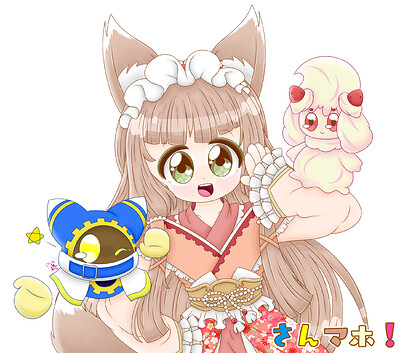 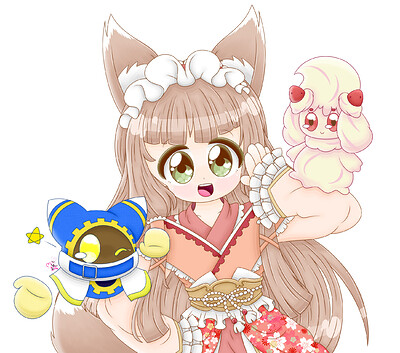 Magolor, Maho Himemiya and Alcremie together! Kirby, Princess Connect and Pokemon crossover fanart. The crossover might be weird depending on your view, but I do have this crossover in my head for a while. Because, in Japanese versions of the names, they all share the first two katakana characters in their names (“マホ”, read as “maho”). I will list down the Japanese names of the characters to see if it’s true.
マホロア Magolor
マホイップ Alcremie
マホ姫 Maho (her name is actually 姫宮真歩, which doesn’t contain the first two katakana characters and her family name is always written in the start before her given name in the Japanese format, but she is usually called マホ or probably マホ姫 in-game :3)
There you go.

The reason why I have this crossover in my head and drew it is because on Twitter, whenever I look up Magolor’s fan-nickname used among many Japanese Kirby fans, which is just マホ instead of マホロア (basically the fans shortened his name), instead there a lot of tweets mostly about either Alcremie or Maho Himemiya instead of Magolor.

The Japanese text reads さんマホ！ (Sanmaho!/Three Mahos!) and is added via Phonto. (Currently, we cannot add fonts to Krita Android, so I have to use a separate app, lmao.)

The drawing is originally drawn yesterday. I was about to post this to this site, but I forgor

Please note that I am not a fan of either PriConne or Pokemon, I just like Kirby so much lately (especially the character Magolor, he is so cuteeeee)! I only draw this fanart because it was only made just for fun.

I hope you enjoyed the drawing! The drawing took 22 days because it’s sooooo hard to get used to Krita Mobile after quitting ibisPaint and CSP. Also I procrastinate. (⁠•⁠ ⁠▽⁠ ⁠•⁠;⁠)

Myunie out! More of my artwork will be drawn and posted in the future, whenever I feel like it.

I love it. Very very kawai!!