Type of device* : Graphical tablet
Brand and version of the device: Huion 1060 plus
System** : MacOS Sierra

Description of the issue (you can include screenshots):
Hello,

I recently got a graphical tablet (Huion 1060 plus) and I just downloaded krita. For some reason, as soon as I start drawing something with the brush tool, some random lines keep appearing while I draw. After reading posts about other problems, I’ve played around with the pressure sensitivity and it’s doing better than with the default settings, but it still draws lines on its own from time to time… Before krita, I used this graphical tablet with photoshop in this same MacBook (it’s from 2011) and it didn’t show this problem.

Does anyone maybe have an idea of why this might be happening and how to solve it?

Thanks a lot in advanced!

I see the same problems with our test Huion on my macbook pro in both Krita and in Corel Painter. I don’t have Photoshop on that system. I’ll ask my contacts at Huion what might be up.

@boud, I would really appreciate that. Thanks a lot for the help!

Okay, I’ve heard back from Huion. Here’s their reply: 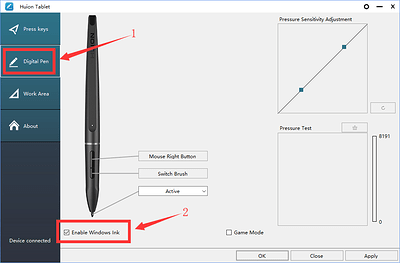 Sorry, I couldn’t answer before. I will definitely try those tips this weekend. I’ll keep you updated, I’ll post here if it worked out.

Thanks a lot for the help