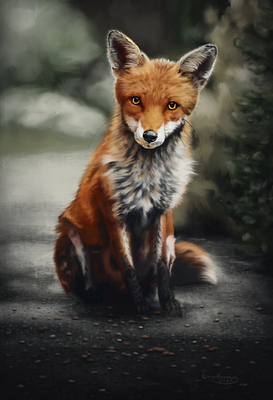 sitting fox2260×3310 1.15 MB
I’ve had a lot of fun getting comfortable working on a traditional oil painting style with this practice painting recently. Before now I’ve mostly focused on creating textures for 3D, so this is technically my first proper digital painting.

As I wanted to focus on getting comfortable with the tools and workflow, I chose to stay pretty true to a single reference photo that I’ve found by Alex Andrews on the CC-0 photo sharing site, Pexels.
https://www.pexels.com/photo/photo-of-fox-sitting-on-ground-2295744/

This took me a bit under 30 hours over 4 different days of painting. It was pretty slow going because I really had no idea what I was doing and wasted tons of time having fun messing around with mixing colors on the canvas and experimenting with different ways to do strokes with the Wet Bristle Rough brush which I used for nearly everything other than some of the noise texture on the pavement and the whiskers. Forgot to take note of the texture and liner brushes I used for those, but fairly certain they were also stock brushes.

I saved out some JPEGs along the way at various stages while working, figured I’d share those as well on the off chance anyone was interested in that sort of thing.

I usually gave up in 7th hour

Heh, thanks. I’d really like to come up with a workflow where I could get decent results in about 6-8 hours. Might take a while though. The big thing will probably be developing a more reliable color confidence, so I can get proper color choices down right from the start as quickly as possible so I can put most of my effort into refining the details much more quickly.

Getting a fast workflow is all about being loose and not rendering every detail as it is, but more as an illusion. And being loose enough so that if you make a mistake, you will quickly fix by completeky redoing it (sounds counterintuitive, but I personally waste so much time if I try to liquify stuff around or something)

Makes sense. I try to work from rough to refined in multiple short passes, making sure to stop between each to step back and evaluate to see if there is anything major that needs to be corrected before moving on. Which is a workflow I already use quite a bit in 3D, particularly for sculpting.

Though i still fell into the detail trap in a few spots on this project. First on the somewhat unnecessary pebbles in the foreground and the second time on the fox’s right ear (the one on the left from the viewers perspective). Before I knew it almost 3+ hours had gone by from the time I started working on that ear’s detailed pass and I knew I had to change my strategy and got the other ear done in under an hour, heh.

Everything about this painting is great - from composition, colors to the painting technique used. Definitely one of the best artwork I’ve seen here, well done.

Much of that praise is owed to Alex Andrews, the photographer responsible for my reference photo. I did change things up a tiny bit here and there, but I stayed rather faithful to the original in terms of overall composition and general color choices.

Though I will say that the sketch was free hand, no tracing or anything like that, and I took on the challenge of trying to match colors by eye alone and mostly through mixing on canvas from a small handful of initial colors I added to a custom palette. I didn’t do any color picking from the reference photo - just in case anyone had the wrong impression on that, heh.

I put the fox a bit more off center than the photo, as it just felt a little better to me that way. I did however kinda screw up the depth in the foreground, the camera was much closer to the ground then my rendering of those pebbles would suggest to a keen eyed observer.

Overall I was pretty happy with the results, though not so much with the time it all took, heh. But that’s to be expected with getting into something new, there are always a lot of growing pains to work through while figuring out a workflow. Still struggling to decide on what to follow it up with now, this very well may have been a case of lightning-in-a-bottle, but here’s to hoping it wasn’t, lol.

That’s the proper way of drawing from reference: No tracing, no colour picking and then the big one: Actually trying to make your painting BETTER than the reference. All making you better at observation.

Such an wonderful animal and a wonderful artwork!
Great job and thanks for your reply.

I have a few red foxes run around in the back yard… Sorry to miss the flashing ‘firefox’-like tail, but good non-the-less