It maybe what you are already thinking about but…

It would be useful to make the hypothetical “clone smudge engine” have one standard option in which it samples the area of of the brush and paints it like PS’s Mixer brush and as @Mythmaker demonstrated masterfully a basic clone brush.

And another option, in which it would use the active brush for the contour shape of the brush but it would sample to paint not as a color limited option but that the sampled information as the RGBA part of a RGBA brush. That second option even though not representing the usual workflow artists are used to from other software would take Krita’s functionalities one step ahead of the ones in PhotoShop’s mixer brush in which you are always limited to the color you already have on canvas.

If I understand well - I’m sure I don’t - the functionalities of an RGBA brush something like what was suggested should be in the realms of possible. It would elevate the possibilities of the “clone smudge engine”. But then since you are the one buried in RGBA brush code you’ve probably had this Idea already, I’m just making sure.

Thanks for taking the time to read.

Hmm, your second option sounds intriguing! I can’t think of a use case off the top of my head, but I feel like there very well could be one. Ultimately, I think it would go in the smudge engine, when the full dab sample becomes an option, but for now I may try implementing a prototype of it in the clone engine, just to see what kind of use cases there might be for it. In fact, for the clone engine test, I’ll also implement an option to use the sample data as an alpha mask instead of lightness, to see if that could be useful too. Like I said, I don’t know what the use case is, but I have a suspicion there are some really cool things you could do with that. Awesome idea, and if I get any cool results, I’ll post some examples, and submit a merge request with the options. Thanks @Rami!

How easy is it to include a sharpness filter for brushes in the Smudge Brush engine? I did some testing with @RamonM’s digital atelier brushes and it appears that the sharpness settings in the pixel brush engine can be used to mimic the appearance of oil bristle brushes when applied to a custom brush dab. If I understand correctly, the sharpness settings only affect the appearance of the brush dab, so it might be relatively simple to implement this feature in the smudge brush engine.

@Voronwe13 Yeah, I think hypothetically the two options should be available since the first one reproduces a already “standard” workflow for many users. It’s after all the technique @Mythmaker used on his awesome piece.

For me the use case of the second option - sample RBGA information - would be to reproduce the randomness of a real brush subjected to real physics loaded with real mixed paint.

The objective of the “mixer brush technique” is always to diversify your mark making, a fancy way to say that you should have interesting diverse textures throughout any piece. Artist would constantly be sampling - even in the standard mixer brush technique - so that every other brush stroke looks internally different from the previous ones, even if they are trying to keep the same color. If the RGBA information is locked to the brush that’s already a big improvement from what we have, but if it could be changed in a almost per stroke basis, by constantly sampling the canvas, that would be very close - in appearance at least - to dealing with real oil/acrylic paint.

If I may be so bold as to suggest workflow at this early stage:
Ctlr = Color Sample / Clone sample if the functionality is available for the currently selected brush
Ctrl+Alt = Color sample all layers
Ctrl+Shift = RGBA infromation Sample

PS: The dream function: “Ctrl+Shift” will sample a dab worth of RGBA information. Alternatively if the user holds “Ctlr+Shift” right clicks and drags it across the canvas the initial point of contact with the canvas would be the center and the final drag point would be edge of the drawn radius of a “RGBA sample circle” from which the brush engine would randomly sample a dab’s worth of RGBA information on a per stroke basis. That would streamline the painting process - and complicate the coding process

- and make it for much more interesting stroke basis.
If that last suggestion was too convoluted - which I think it was - I can make a mock up for you.

How easy is it to include a sharpness filter for brushes in the Smudge Brush engine? I did some testing with @RamonM’s digital atelier brushes and it appears that the sharpness settings in the pixel brush engine can be used to mimic the appearance of oil bristle brushes when applied to a custom brush dab. If I understand correctly, the sharpness settings only affect the appearance of the brush dab, so it might be relatively simple to implement this feature in the smudge brush engine.

To better explain what I am talking about, I exported an image from Krita demonstrating how the sharpness mask affects the appearance of the brush dab in the pixel engine for the preset DA_Oil_04_Fine_Bristles From the Digital Atelier bundle by @RamonM. The stroke on the top was made with the default settings for this preset with sharpness set to 100%. The bottom stroke has sharpness disabled. The sharpness effect clearly makes the stroke appear darker on the canvas. 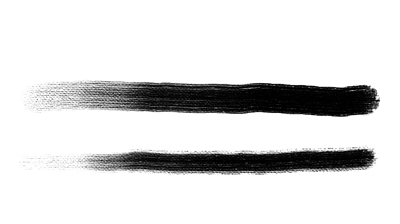 I use sharpness because when you reduce the density in the brushtip you have lot of fine bristles,And i use hardnes to make that more obvious and make the brush more versatile.
The problem, is that iw we increase the brush size, the fibers are still 1 px. This doesn’t happens when we use a predefined brushtip. in my talk in Viena 2012 i talked about it.

Is exposed in the pdf file of Digital Atelier. Is available for FREE if you didn’t notice.

The DigitalAtelier project was exposed with some photos here in my official page
https://www.ramonmiranda.com/digital-atelier-recursos/