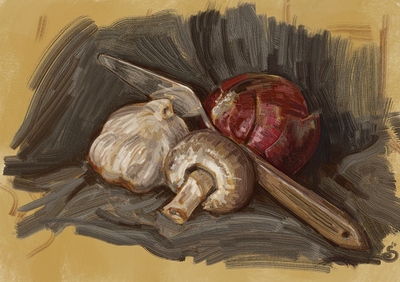 I wanted to do something to demonstrate what I’ve been saying about the clone brush in another thread.

I was also keen to try the technique in combination with the layered impasto effect I posted about a couple of weeks ago. I didn’t have much to demonstrate the effect before as I’ve never actually used it for a painting.

I’m not sure this qualifies as a full painting either - but I think it’s a better showcase for the effect at least.

Aside from that - I also tried to keep my process similar to working with real paint. So I did a toned background, then a loose sketch (in paint). The rendering was done on a single separate layer with the impasto effect applied. I also created an area on a new layer where I painted out a palette to sample from.

The vast majority of the painting was done using only the clone brush - sampling from the on-canvas palette, or the canvas itself. No photos were involved - the still life was set up below and to the side of my monitor and just used the natural light from the window. I wasn’t being fussy about accuracy or realism; aiming for a more sketchy-painterly interpretation.

Oh yeah! - And the onion is the same one I painted in the other thread; It’s been sat there all this time and it’s starting to go rotten!

Here’s a visual breakdown of the process…

This looks great! Thanks for also sharing the process pic

No problem! - Thank you for looking at it!

I didn’t mention - but this uses the same settings as the first impasto template in the pack. It’s quite subtle, but you can really ramp things up to silly proportions. Some combinations end up looking like the surface has been laminated (I think the second template is a bit like that).

If anyone gives it a try it would be cool seeing what you do with it. I’m around fairly regularly if you need any help (it can be a bit complicated - that’s why I made the templates!).

Also - if anyone’s wondering what the point is with using the clone brush; it’s to give a dirty-brush effect like you’d get using real paint. If you look closely you’ll see the colour varies across the width of the stroke (It might have helped if I’d chosen more colourful objects to paint!

Nice job, it looks more analog than digital. I might look into the layered impasto effect. I keep forgetting that I can use layers.

Great job on the reflection on the blade. Some of my favorite foods also. I see “still life pasta” coming later today.

Nice job, it looks more analog than digital. I might look into the layered impasto effect. I keep forgetting that I can use layers.

I’m generally more comfortable working on a single layer, and keep forgetting if I’m trying to keep things separate (e.g. layers for fore/middle/background etc). They are very useful though - and some things can’t be done without them (like this effect)!

I do have one ‘best of both’ trick I use frequently though - to keep things simple and tidy, I merge the main layers into one (when I’m happy), then duplicate it and work on the new layer. That way I have some flexibility, and can turn the layer off to check the older version underneath - just to make sure I’m improving rather than ruining it!

I also save multiple iterations as I go just to be safe (usually before I merge layers).

Great job on the reflection on the blade. Some of my favorite foods also. I see “still life pasta” coming later today.

Thanks! - But I don’t think you’d want to eat them now - the mushroom is looking very shrivelled, and the onion… well… the less said about that the better…!

Are we at son of onion mode now?

It’s funny you should say that - I was having ideas along these lines!

Keep an eye out just in case…

This is good stuff @Mythmaker

Have you had a play with any of the templates I made? It’s a bit of a novelty but quite fun to paint with. I don’t think it’s suitable for my usual kind of paintings, but I have done some interesting textural experiments that I’d like to make use of.

The clone brush on the other hand is very useful - which is why I’ve been gently pushing for expanded functionality.

I haven’t had the chance to try out the templates yet. Was it on the other linked threads? Because if it is, I haven’t fully read all of the linked threads yet.

Yeah - it’s the ‘layered impasto effect’ link above, or you can find it in the tutorials and resources section.

It’s not imperative anyway - more of a fun diversion; unless you actually want to emulate the wet oil look.

We also have the RGBA brush options available now, though the two approaches are quite different in practice and effect.

I believe understanding how the layered effect works is useful though because it’s very flexible - so can be applied in other ways.

I tried it bro, and it is very interesting. I might use it in my next speed paint…