The Day I Met Hue 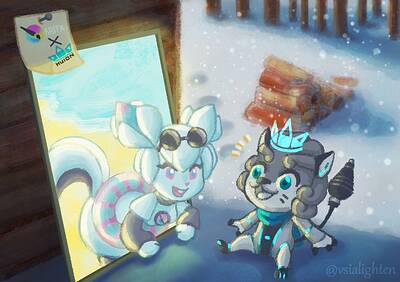 “I imagine Leon living with his Maker who invents different kinds of inventions in a place where there is nothing but Winter Season. One day he finds a magical screen that his Master/Maker hid far away from their house because for some reason it doesn’t work. Leon unknowingly touches the device with his tail accidentally opens a portal to a brand new world. There he saw a very peculiar creature and a very distinct kind of snow but with a different color, and their water was moving!
Upon seeing Leon for the first time, Kiki who was very exhilarated pops half of her body out on the magical portal to greet him, and this was the beginning of their friendship. As they connect to each other’s world and explore new things that they’ve never seen before, their everyday life became more interesting and colorful!”

I chose the contrasting seasons which are Summer and Winter because I live in a tropical country that only has a dry and wet season (which is mostly Summer). I’ve always been wanting to experience Winter snowーso that’s how I got the idea of their story, and I kinda feel like it also connects with everyone who participated in this contest!

I used Krita and Wacom Intuos for making this entry~