This is a really small set of brushes, currently 10. They do say, less is more

I made it to organize things I found essential to be contained in a practical bundle. I have been downloading some bundles and now I have way too many brushes to use and some I don’t even know from which bundle they come from. So I did some trail and error until I found those that I liked most to pack them here and calibrated as needed to my tablet. And gave them some icons that allows me to see them amidst the jungle that is my brush preset list.

I am just starting to learn how to paint so this brush set is geared towards new users. With time I will probably go adding stuff to the list and edit the existing ones as I go along. Hope it is still useful though.

if there is any issue with the packaging just tell me about it. 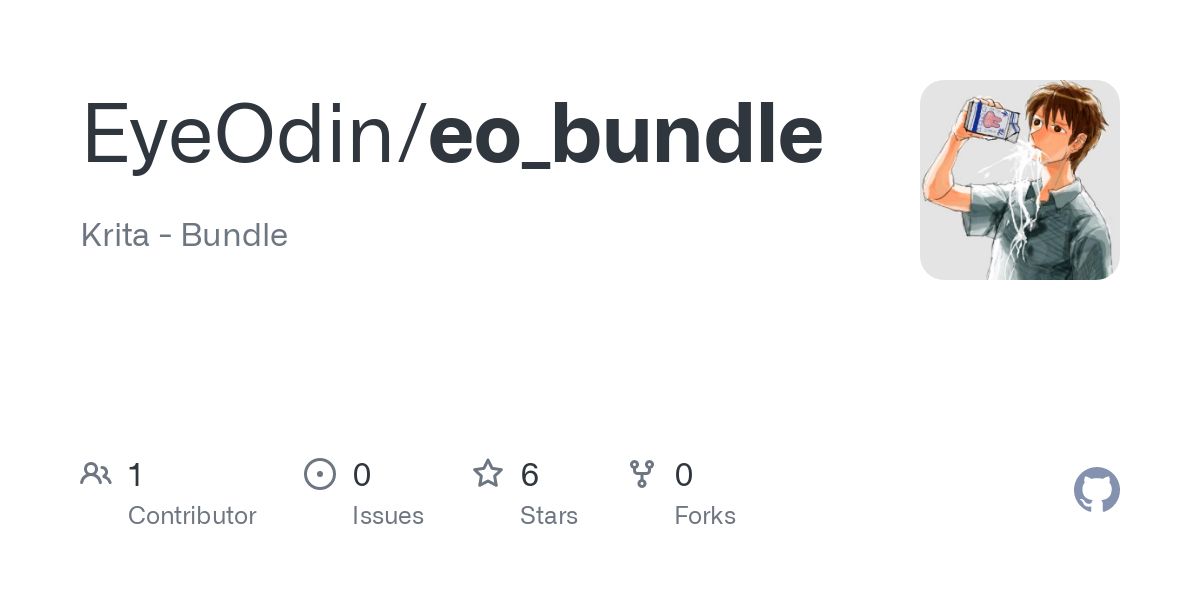 Krita - Bundle. Contribute to EyeOdin/eo_bundle development by creating an account on GitHub.

Well I did a small update and added 2 pixel based soft brushes this time.

I made them from scratch but troubleshooting various methods around other brushes to try and reach a end goal, a behavior that exists on 3d sculpting programs. Honestly I did not hit the mark close enough but it is close as I was able to do for now. By my testing I think they should be nice but might need some future calibration due to some volition.

I will just state them and their expected use cases.

Pixel Soft Ink - A ink brush surrounded by a air brush. Seems nice to make sketches and a nice eraser.

if anyone has feed back I would be curious to hear about it.

As I was making new brushes the idea of making a no weird textures Bundle was on my mind for how strange it might be so this will all feel very generic. I feel that making a Texture creates so much variations between brushes that makes things hard to manage and I should focus in making a cool brushes that can accept a texture and adapt to it giving a good start when I want to use one. But hey that is just me. Regardless I make use of 2 generic textures for the time being.

Explored a bit on the various engines and started making presets on the ones that seemed more obvious to make right away. Because of this I adjusted my naming convention to be more clear for the Brushes.

Stuff I feel is worth mentioning for some reason:

Clone Visible - just the clone brush but just calibrated to not create banding on the image, has limitation and requeries a empty layer though. Can be changed to Normal blending mode to behave like the normal clone brush but will do the banding the same way sorry. Also it does not feel as heavy handed on my stylus so just don’t expect it to be something new.

Curve Roller - This one is a wild card. It is derived from the curve engine and makes a line that is expressive and of fixed width. Very compelling to me for line art in animation but seems not to like to be scaled up too much. I might review it into another engine if I have too like everyone does honestly I was not expecting to make this one.

Pixel Adjust - The thing I am most unhappy about is really these icons I have been making they had a certain vision so to speak at the start but now they are messed up due to having to represent blend modes. I need to think more about that but I have no better ideas for now. I still have some more engines I need to work some better brushes for it so I will be reviewing them later on. For the time being they are understandable enough. As for function they seem pretty nice and consistent between them. These are the ones most eligible to be reviewed though.

Deform Color Bleed - This brush should have been created already somehow but hasn’t? I guess people don’t have use for bleed but I do. So I made a brush no one wants XD

Spray Bokeh - Does it even need a explanation? it is Bokeh

Tried to make the most “classic” effect as for the others I might do some time later if this one is not enough or adjustable to replace making more. I just love this effect so much, some lens aberrations are just so pretty.

As for the rest just do some scribbles it is pretty straight forward.

Making this bundle I managed to see why Krita 5 is doing what they are doing I am hyped for it, making a bundle is pretty hard to handle.

the new Brushes and new icons.

Hello, I tried to import your bundle in krita 5 beta1, but the preset does not show in the list even after restarting, maybe because you used a subfolder (i think it works differently and you can’t now).
I also try to copy the bundle in krita folder and recreate the database, it also doesn’t work.

I made a new bundle. and updated it. @mako are you able to open it now?

I just downloaded it and it imported ok with the 5.0.0-beta1 appimage on Debian 10.

Had same problem as @mako
Can confirm bundle is now loading on Windows 10 x64 Krita beta 5.0.0-beta1
Not as fancy as some other bundles but has every essential preset needed to start out in digital painting.
Good job!

Why hide it away so that many won’t see it?

Because my post is mainly about brush bundle trubleshouting, but you are right ill finish this sketch and post it in relevant thread