The Fourth Season Of Kiki And Leon 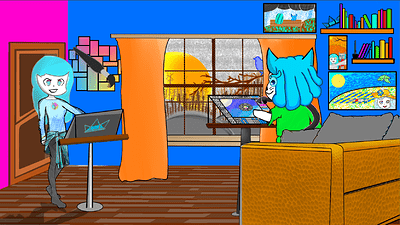 (these files are in .kra format ,so the need to be downloaded and unzipped)

Hi, I am uploading my entry for the contest of four seasons of Kiki and Leon which was completely made in Krita with the only exception of Leon’s tail(which was made in paint 3D) ,and as I did not possess a tablet I have made this entirely using my laptop and my yearly examinations were going on, this project took me 1 month and to make the lines look natural I used the brush:
d)_Ink-2_Fineliner_Copy(d)-Ink-2_Fineliner_Copy-backup_2021-01-02-143933.kpp)

and smudging was done using:
K)_Blender_Blur(k)_Blender_Blur_backup-2021-01-02-144606.kpp)
(
Fun fact(s) : The lower shelf on the right side is a reference to a Huion pen stand and the Krita color palette and I hope I don’t have to mention the obvious ones but I will just in case, Leon’s crown is present above the previously mentioned shelf, which is also the Huion symbol(Which I intentionally removed as to not show one superior than the other) and I also made the symbol on Kiki’s tablet as to make it very clear. The Krita symbol was placed on the 2nd wall, but in case of it not being considered a symbol ,I put one on Kiki’s T-shirt(Just in case).

The jpg of the layers would’ve been too many to upload alone so I converted it in to a GIF:

Edit: Please do reply to me and tell me what could’ve been better , I thank you in advance for any reply. 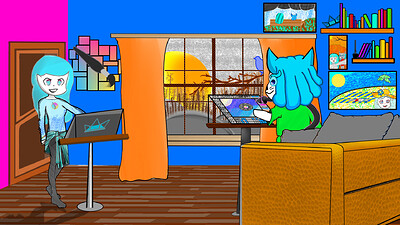