The Goat and the Wolf

This is the very first big painting I did with Krita. It’s a bit old, three years, but it is still my favorite piece.

It is a retelling of the French children’s tale La Chèvre de Monsieur Seguin. I think I’ve been a bit inspired by Carpenter’s The Thing as well!

Mr Seguin had six goats, all eaten by the wolf. The last one, Blanquette, is bored and wishes to see the mountains. Mr Seguin keeps her locked up at all times, but one day Blanquette escapes for the mountains. As dusk is setting in, she hears Mr Seguin’s foghorn, calling her back. But she doesn’t find her way home and ends up face to face with the wolf. Blanquette fights the whole night, but at dawn she is too tired to keep fighting so she lets herself get devoured.

In this dark-fantasy retelling, humanity has disappeared. The animals who survived have evolved, some became smart while others turned into monsters. Blanquette and other goats became a clan of warriors. A monstrous mutant wolf started killing the goats who ventured too deep into the mountain, so one day Blanquette decides to take maters into her own hands and hunts down the beast.
As they fight under a stormy night, Blanquette tries to climb on top of a mountain, the gigantic wolf-monster behind her. She falls, holds on to some roots but they can’t support her weight. As she is about to plummet down, maybe to her death, she has time to fire a well aimed shot at the beast’s main head. 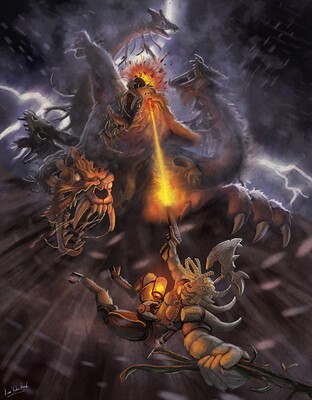 This makes you today’s goat.