Some time ago, I was going to paint a picture then make eight colour variants using HSL filtering and arrange them on a 3 x 3 grid. (Yes, I know it’s been done before.)
I didn’t get far with the picture but became interested in making various ‘thumbnail grids’ using group clones and transform masks.

Here are the ones I’ve made, for your use if you like the idea.
ThumbGridMakers.zip

I made them with krita 4.4.8 and they have vector text/label layers so you’ll get a caution/warning if you open them in versions 5.

I thought about making 2 x 3 and 3 x 2 and 4 x 3 etc grids but I’ll let someone else try making those.
Grids with a border around the thumbnail image can be made but again, someone else can make those 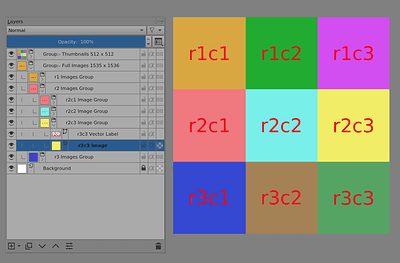 You’d paste a 1536 x 1536 image into the r2c3 image group, then delete the existing ‘r2c3 Image’ and the ‘r2c3 Vector Label’ layers. It’s the rAcB Image Group layer that is cloned and then transformed to make the positioned thumbnail, tucked away in the detailed structure of the ‘Group:- Thumbnails 512 x 512’ layer.
I’m sure you’ll be able to understand it all. If not, just ask here.