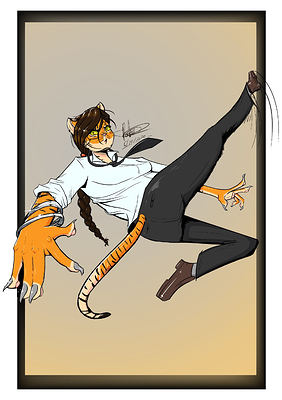 Just a simple tigress character in office clothes doing a little kick. I am a bit worried about the perspective especially in the legs and if there’s enough energy in her pose.

Welcome to the forums. If you ask for critique I’m sure you will get it. Remember people are only trying to help. My solution for those kind of questions is to just do another picture. I like the energy and the motion.

As you asked for critique and you’re wondering about perspective and energy, here are my remarks:

Unfortunately I’m not good enough in body drawing to help you more about the 2 point concerning perspective on legs and foot.

I provided you some tip on picture but not really sure about what have to be really done to fix the perspective problem. I did it quickly, it not really properly made

The idea is just to illustrate my explanations 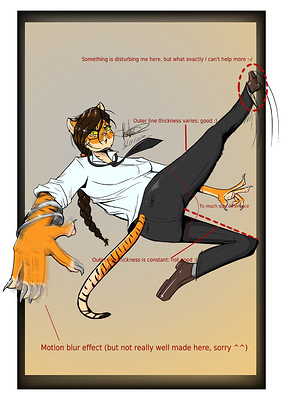 First my usual disclaimer that I’m just an amateur, so all I write can be just plain wrong.

Like @Grum999 already suggested there is something odd wit the foot but I think its the entire legs, I couldn’t really put my finger on it until I tried it myself. It just looks like the legs are not in the position the rotation oft the hip and the butt suggests. It looks more like the tiger does a split instead of a kick. I put some red lines on it to better illustrate what I mean. 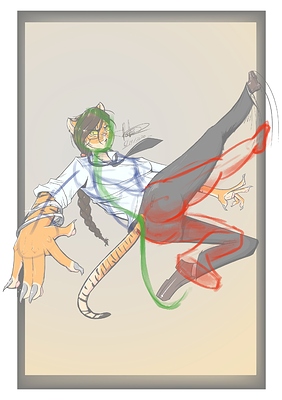 Of course you could leave the legs basically as-is butt the butt would need some adjusting and the foreshortening of the right leg has to be removed mostly.

The Tail can really help you since it’s just an extension of the spine and the line from the neck to its tip often closely follows the line of action. I think, now that I look at it again, I’d make the tail rather curl the other way.

Yes, it looks more natural with your suggestion (I wasn’t able to draw this