With Krita 5.0, there were a number of things that were added to the transform tool options. Because of this, the options are not displaying very well when trying to reduce the width of the docker. Here is the bug report about it now… 446783 – Transform Options Panel not sizing correctly; 5.0.0-beta5 (git 783e051)

I think we need to consolidate some of these options or re-organize them so they work better if you make the docker a smaller width. These are the various screens of the transform tool depending on what you want to use… 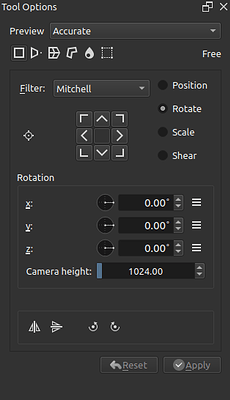 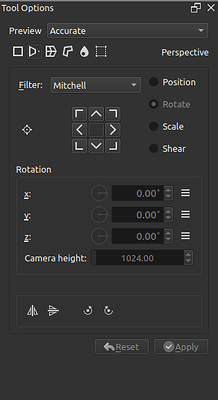 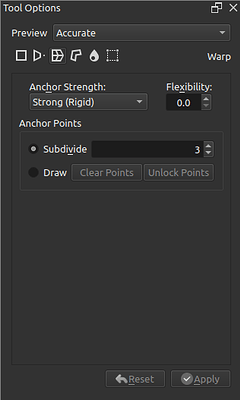 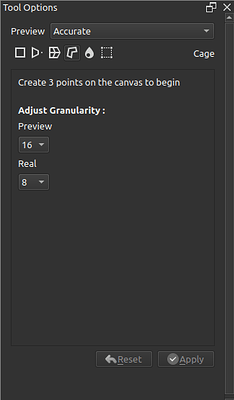 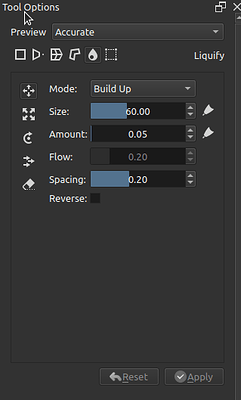 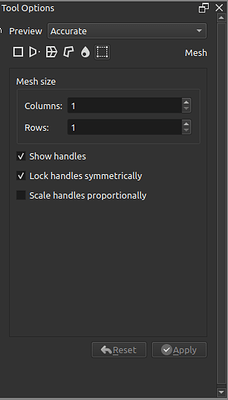 Hi @scottyp That does make the Free-Rotate options a bit taller, which I can adapt to with my own custom workspaces.
Maybe the Default workspace needs to be redesigned as well.

I’ve just noticed that the Work Recursively (spider) icon went away in 5.0.0.
What happened with that?

I think the widest panel is “Warp” with its row “(o) Draw [Clear Points][Unlock Points]”, which causes all others to scroll horizontally.

The Free transform layout is too chaotic for my taste.
I rarely need the pivot placement stuff, but they’re kind of the main focus.
What I do need are the radio buttons on the right, but they also need a lot of vertical space, maybe icons would be better.

The mirror/rotate at the bottom is something I literally never use, it’s redundant (in mutiple ways even, it’s also in the tool context menu), and doesn’t play well with numeric inputs and gets overwritten if you touch the respective value (scale/rotate).

The rotate options are a bit annoying too, “z” is the only one I need in 99% of all cases, but it’s sandwiched in other controls. 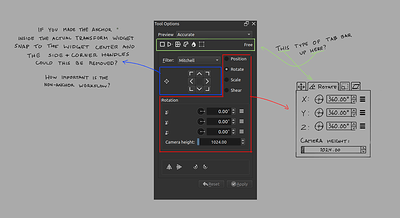 ps. could something be done to make the “3d rotation” (holding alt) more discoverable?

@AhabGreybeard - FYI – I haven’t changed the UI at all with these screens…so they aren’t proposals. They are just what exists today. I am mostly getting some feedback and ideas on ways we could better organize these options to better use the space.

@Halcyoen - Ahh! That is an interesting idea to turn those position/rotate/scale/shear options into tabs. That could help condense that space. There is a lot of stuff in that area and we probably need to change the layout of that someway like you are proposing.

I am not sure how often that anchor toggle gets used. Another way to potentially save space would be to put some of these global transform settings in a drop-down menu. For example, we could potentially put the “Preview” options into a drop-down. I am not sure if most artists are going to change that a lot and the one option is a lot of text.

I think something must have happened to the layout in 5.0…because there is a ton of “dead” space now at the bottom of most of these transform types. The reset and apply buttons should be right below the last options. The liquify, cage, and warp options need all that dead space removed.

@AhabGreybeard The recursive transform only worked with the masks it was confusing as people thought it meant it will apply and work on objects within group too. This was removed in this Merge request - Remove work recursively button (!854) · Merge requests · Graphics / Krita · GitLab
You can read more about the thought process and discussion there.

, it needs to be sketched out properly, by taking into consideration the common items like transform filter, pivot points etc

@scottyp @Halcyoen transform around pivot gets used all the time. People generally hold the Alt key to scale around the pivot point. For example I need to scale down a circle/ellipse inside itself to make a ring etc. It is the commonly used action.

While we can say that more people use the shortcut to do it, but UI options should not be removed without thought. And snapping the pivot points from the on canvas transform decorations sounds like a good idea, but it hinders in a scenario where I want to have the anchor point close enough to the snap point but not have it snapped. Now that we have tweening in the animation, pivot points play a very important role in cut-out type animation styles. This will make it annoying experience. So in order to move the pivot point to the on canvas operation without button in the toolbar like how inkscape and affinity designer do we need an option to turn snapping on and off.

And there might be also a scenario where the object is very big and manually moving the pivot point on canvas to the edge of the transform handle is tedious than moving it to the corners with a click of a button. So In my opinion we need the buttons and the checkbox to transform around pivot

I agree that the anchor points take too much space, may be we can make it compact. Here is how photoshop shows this

There is a small checkbox and small grid of nodes. This will be too small, but it can be a step in right direction to make it compact.

@raghukamath - I was more thinking re-arranging the existing options…and not actually removing anything. This is one direction I was thinking we could go to move things around. 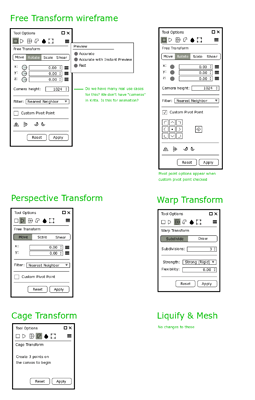 Here is the SVG file if you want to play around with this file and change things around…
https://drive.google.com/file/d/1ge2mczMJUWL1L4ny4Nym7Ekrl4BDfOLT/view?usp=sharing

I like the tabbed interface of the scale rotate shear etc. Also the preview options in the hamburger makes sense, most users will set it once and not repeatedly

Although nice idea, the custom pivot point is a bit wrong in my opinion. Since it has pre-set points around the corners and center and not custom point per se. Also the button besides the grid allows you to pivot around the point,You can move the pivot anytime, the option just enabled you to use it as center of the transform. This is not used in rotate as far I can see, since rotatation is always done around existing pivot. You can check the effect more clearly in the scale option.

Regarding the camera option, it helps in making transformation in z axis. We can do it by holding the ctrl key while dragging the handles, but this options helps us to set the perspective angle quickly, hope I explained correctly rather than confusing you

or stating what you know already.

Regarding the camera option, it helps in making transformation in z axis.

The Camera Height affects the ‘constructed view’ of rotations in the x and y axes.
These can be done by using a Ctrl modifier when rotating using canvas control handles. For some reason, it’s more responsive if you use the rotation spinners in the Tool Options docker.

anything to try and make the pivot options more space efficient is a huge improvement in my books.

I agree that it can be smaller and definitely more compact.

I think that’d work for me, looks much cleaner.

Although I’m a bit blind when it comes to hamburger menus, but I think I change preview option often enough to not forget where to look, and not often enough to need it prominently in its own top row, so fine with me.

My only concern is that the “transform around pivot” option looks like it’s only active when enabling “custom pivot” controls, I like to have it enabled all the time. But if it’s just a collapsible section and the option stays enabled, I’m fine.

also I would like to add that please make the anchors more visible…
Here is a game of finding the anchors: 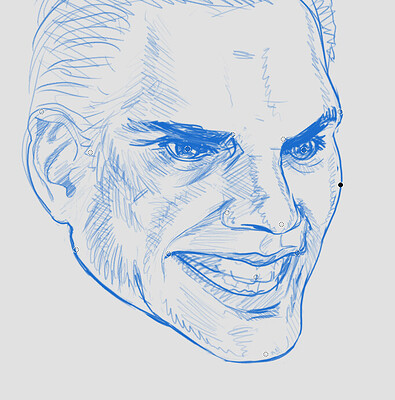