3-point perspective grid in SeExpr, I want some feedback

Hi, I am working on a SeExpr scripts bundle. I’m going to make several grids, I already have standard grid (define the grid by pixels), divided grid (by default: “rule of thirds” grid, but it doesn’t need to be divided into three sections), phi grid (“rule of thirds” but with the golden ratio), and I recently coded the 3-point perspective grid as well.

However it’s not really as straight-forward as other grids, hence I’m writing this thread to get some feedback from other users. 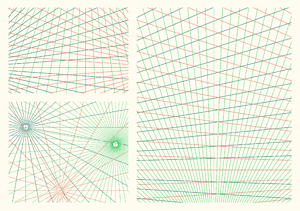 pretty_test_file3508×2480 602 KB
This image above was created in Krita using three Fill Layers with those scripts attached with some different configurations. I used Multiply method there.

You need to use Krita Plus and download my script from: https://drive.google.com/file/d/1TWGpsVkz_rpJtYDzcfPye-yfgSRukzlJ/view?usp=sharing 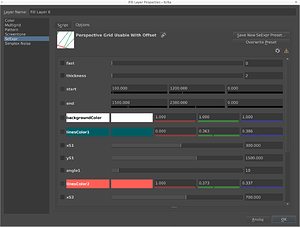 While this is an interesting showcase of what SeExpr can do, unfortunately my dated i3 Haswell isn’t powerful enough to utilize this particular script to a usable degree, even when using all four threads. Maybe others with more modern and powerful processors would be able to make use of this, but the performance problem also exasperates the difficulty of the UX, as I can’t drag the points on the canvas to where I’d want them, so I’d have to make estimates with the sliders. After editing the x/y locations using these sliders, it will take at least a couple seconds for the canvas to update to truly see where the vanishing point will lie, even when using the fast setting.

(It also appears to crash when reloading the default script preset, but this appears to also be a problem with other bundled scripts in git commit version ec42777.)

Thanks for your review! That helps a lot, even if it wasn’t positive.

(It also appears to crash when reloading the default script preset, but this appears to also be a problem with other bundled scripts in git commit version ec42777.)

This is on master/Krita Next, which has issues with resource management right now, so it’s expected. I don’t think it happens on stable though.

So I would say performance leave something to be desired. But maybe SeExpr cant run faster idk.

For UX it wouldnt really matter. Ofcourse if unused vector would be hidden on UI.

As for my suggstions:

Its good feature to have for people that prefer to have their perspective grid on rasterized layer.
It can be used to generate one vanishing point on the middle of the canvas and then paste it as layer onto your other projects (thats pretty popular workflow around the internet) - slow performance of script doesnt matter in this workflow.

Krita’s Assistant perspective tools are really amazing and its hard to top it, but I belive this script will find its users