A proposal of better ways to navigate complicate layer structure

I sometimes have more than 50 layers in a single piece. It’s always an pain in ass to navigate through a complicate layer stack (tree in case of krita) like this, no matter which painting app I use.

Right now, Krita has two main tools to jump between layers. One is R+LMB to select a layer under the cursor. Another is “select previous active layer”, which is what PS/CSP’s lacking.

I can think of two possible ways to improve layer navigation. 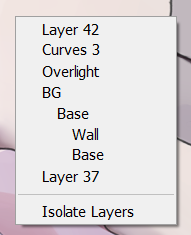 It’s a (often neglected) feature in Photoshop. But it’s so useful that I never use the vanilla “Auto Select” feature ever since I found this. It solves the exact problem that I described: instead of selecting the top-most one, it lists all the layers under the cursor. And the list is indented according the group structure, so it’s very easy to find the layer you really want.

This one is self-explanation. Right now Krita and Photoshop can both “filter” layers by name. But I don’t think it’s efficient to jump to a specific layer. Actually, Krita has a perfect designed UI for this job: 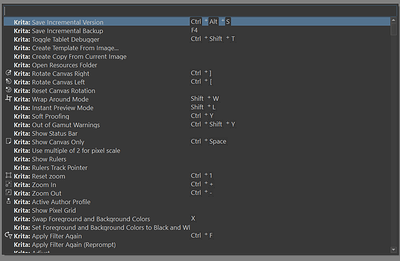 It can only search for actions now, but how about to have a similar feature to search for layers?

Bonus point: It would be extremely nature for people with coding background. Most IDE and modern editors have similar features. You can search for action, or search for file, or search for symbol (function name etc). To me, personally, jumping to a layer while painting file is very similar to jumping to a function while coding.

Actually, the Ctrl+Return search dialog DOES include layers, they show up like “Layers/Masks: Activate <layer name>”, but yes, they drown in the hundreds of actions…also because they are at the bottom.

But I’ve never managed to speed up my workflow with such global search features, too much to type to filter out unrelated things containing the same letters.
I only use them if I forgot where to find something specific, or its shortcut.

Having a mode/filter specifically for layers would be nice…but even though Qt Creators for examples has filtering, it still feel clunky to me, I use its “Follow Symbol Under Cursor” (which is a bit like option 1) much more extensively than the “Type to locate” feature.

but yes, they drown in the hundreds of actions…also because they are at the bottom.

May be they can be at the top and after a separator all the actions can be shown. Or may be like duck duck go we can have bangs to different types of search to filter things out like !l for layers etc

Qt Creator also uses prefixes, and I don’t even try to memorize them anymore, because it takes me longer to recall them (correctly) than to just click on the list (or use a more dedicated UI element for it straight away)…

Anyway, if it helps others, why not. 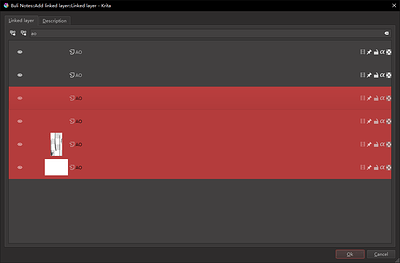 Wow I didn’t realized it can already search layers…

I think something like that is sufficient. bar searches for actions, @bar searches for layers, !bar for brushes, etc. I know these symbol are probably not easiest to remember… it’s just an example.

Yes but VSCode has shortcuts for every specific search type. It’s faster than type bang symbols once the popup displays.

I like the idea with the menu.
R+Click but hold the mousbutton for a second and the menu pops up (or something like that) would be really cool. Maybe it could somehow highlight or isolate the selected layer when you move the mouse over the menu - for people like me who are too lazy for naming their layers.

In Indesign, the Quick Apply (search function) has checkboxes to search for menu items under an advanced options rollout for, layers, tools, styles, etc. Perhaps that’s the most straightforward way of implementing this, without the need to remember various shortcut methods (i.e. bangs).