Hi. I am trying to improve/fix some issue regarding slowness when using the color labeled layers as reference in the tools that use that feature.

In one comment, @Ralek pointed some weird behavior when groups have a label that is to be used as reference.

In relation to your question, I think the group and its status should be determinant, no matter what properties the levels contained in it have at that moment. So I agree with you.

Regarding this I am not sure. I will add a label to a specific layer to target it, be it inside group or some other place. So ignoring it would be problematic for me. For example suppose I have a group of layers having one character. And I have the layer which has shadows inside this character group labelled as reference layer. When I am doing a contiguous selection I would expect it to select from the shadow layer even if it is inside the group. If I want to target the group as composite image as a whole I will use the label that I added to the whole group. If you remove the ability to target the specific layer and only leave the target to be the composite of the group then it hinders the process and I will be forced to keep target layers outside of the groups which have labels.

This I agree as in this helps where I have hidden a group knowing fully that the target layer is inside it so I will not expect it to be used as reference layer.

The first issue is when you have a group labeled with a label used for reference but also you have layers inside labeled as reference. Currently the group projection is used for the merged reference image, but the reference layers inside are used as well. The result is like some layers are merged twice. The suggestion is to change that behavior so that if a group is labeled with a label that is used as reference, then only it’s projection is used, ignoring any of the layers inside for merging, regardless of them being labeled.
See the example of this issue in the comment by ralek in the mr.

Yes if the group and the layer inside has same colour then the composite of the group should be used. But if the colour of the label of layer inside the group is not same then it should not be ignored. 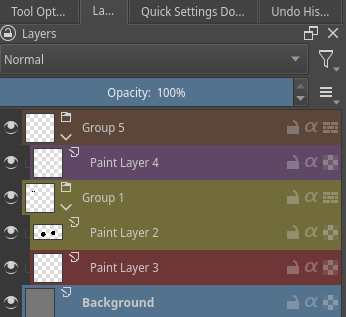 Ignoring the layer label should only be done when the labels of parent group is same.

I am talking about priority and not ignoring individual layer labels because labels are not just used for targeting as reference layers, they are also used for organizing things. I can have entire group in red but one layer in blue for targeting purpose so this blue layer should not be ignored just because parent group has some label.

A bit of a mix up, I believe we’re agreeing on the same thing.

Yes, the main problem is that right now, if a group has a label that is used as reference, its projection is merged in the resulting temporary reference image, and if that group has more reference layers inside then those are merged as well. But the group’s projection already has the contents of the child layers painted on it. So the end result is as if those child layers were painted twice, which produces bad results at the end.