First I want to say a big thanks to anyone who participated in the first Krita 5 beta. Reporting bugs in the initial Krita 5 announcement, on Tiar’s structured beta tests, or posting individual posts/bug reports is all great and really helps to make Krita better. Even just trying it and posting it works well for you is also super useful so don’t feel shy to post your experience.

The next beta release will probably be released next week depending on if some issues get resolved. If you’ve used the first beta and encountered issues or bugs make sure to test out the new beta when it comes out and see if it’s resolved. A lot of bugs have been so there’s a good chance it has.

Bugs this week are up a little bit for the first time in a while. With 37 new bugs and 33 closed. Although with all the Krita 5 bug testing/reporting its a natural thing to happen.

Krita now has a new build type for windows (Clang12 via MSYS2) which should increase performance by 30-40% according to some benchmarks. It won’t be default for some time I think but its very promising (Dmitry Kazakov and Amyspark)

Tablet settings now include a maximum brush speed and brush smoothing options. These should help some people with their tablet behaving badly at fast strokes or not tracking your brush speed well (Dmitry Kazakov) 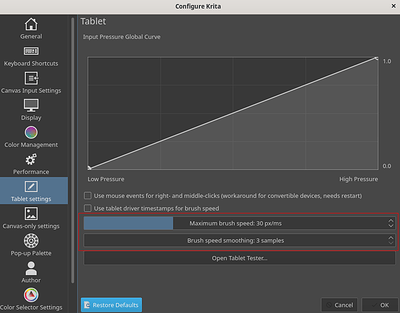 Fixed file layers not saving on first save (Ivan Yossi)

Thanks for reading! If you like what the krita team is doing consider making a donation at fund.krita.org. It helps to keep the Krita devs working full time to make Krita better.

Wow that is awesome!

Is this a seperate build that the user downloads, or can it be changed in settings/upon installation?

The next beta release will probably be released next week

Epic - super excited, the team is doing such a great job, even the 5.0 beta crashes only tiiny amounts when doing super specific stuff (and has been fixed shortly after I send bug reports

Wow that is awesome!

Is this a seperate build that the user downloads, or can it be changed in settings/upon installation?

Amyspark created a test build in the merge request. I’m not sure how to link the comment but the download is here. Test it out and let use know how it works. Sadly I don’t have windows machine myself so I wasn’t able to test it myself.

Thank you! It might be placebo, but it feels faster and smoother!

Will try the build more tomorrow, and report bugs if I find them