What caught my eye is the way the dockers are organized: 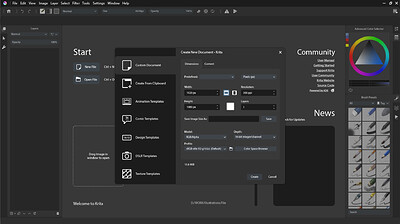 Even though the concept includes a lot of other things, it would be great to have at least the tabs thing going.

What do you think?

I was thinking of making something like that, having vertical icons that lets one access dockers when clicking on the icon to show and hide them.

Mostly for Android as currently the dockers take up a bit too much space for a small tablet screen. For desktop, I prefer how it is as you can stack way more dockers on a large screen.

It could be more like photoshop, where if you expand the icons, it also shows text. Clicking on the icons expands the panel (docker). This makes multi-column dockers rather convenient, since you can collapse the whole column to a bunch of icons, so you don’t need to rearrange all of them when you want to have the second column again.

As for vertical tabs, I think that icons on the sides require more screen real estate then horizontal. Or at least I find horizontal less intrusive, since there is less blank space. Though as I said for collapsable dockers, the way Photoshop does, then vertical makes sense. For expanded dockers, horizontal please.

We already discussed having icons instead of text for the docker titlebar before. It’s techically easy-peasy – but coming up with good icons is really hard. Clip studio uses icons, and those are not just really hard to figur out, they’re also painted clipped, so to my fifty year old eyes, they all look like hangul

Vertical tabs is also easy-peasy – you could even do that from python by just getting the activeWindow().qwindow().setDockOption(VerticalTabs). 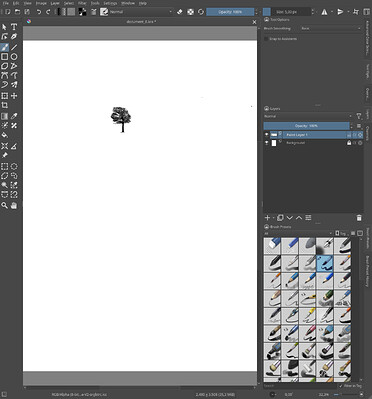 (Note: whether the tabs are left or right should also be settable in this way, but I haven’t check that. We’re busy testing the 5.0 branch for release readiness today, so this was just me skiving off for a bit)

Can it become a part of Krita configuration?

Not as is, because, with text labels, I think it’s too ugly. If someone could come up with good icons for all dockers, I’d like to make two modes, vertical with icons and horizontal with text

But in any case: we’re planning to drop qdockwidget for kddockwidgets, maybe already for 5.1, since that’s much better maintained. I haven’t checked whether that supports vertical tabs, too – the dox are here: KDDockWidgets API Documentation: Main Page. But it’s pretty flexible.

Wow! I am curious how it will impact plugin developers?
A bit off topic, though one sentence will be enough

Every plugin that does stuff to dockers will to be rewritten, and we’ll have to wrap some of these classes so they’re accessible. If kddockwidgets had been API compatible with QDockWidget, we’d already have made the change, but it’s a largish rewrite for Krita itself.

The tabs has icons (instead of text)

GIMP has some icons, but they don’t look good.
And does this mean that plugin authors also need to design icons for their own docker? If there is no good and unified design, installing plug-ins may be a disaster…

GIMP has some icons, but they don’t look good.
And does this mean that plugin authors also need to design icons for their own docker? If there is no good and unified design, installing plug-ins may be a disaster…

I do not think it is a good idea to take icons from other programs (unless icons is some sort of a standard). Krita already has its theme.

So all artists of the community will generate a whole bunch of icons. Not sure how it is better be organized though.

In terms of icons for plugin. I think it is ok to have default icon, if the author did not make one. If the author will not make a proper icon the plugin will not look good

So it is in his interest to actually do it. And actually make it look good in the interface itself.

However it would be interesting what competitors do.

I personally as a plugin developer totally up to it. Krita can (and should in my opinion) set its standards

So who knows, maybe after a while, there will be a design guide for plugin developers

Off-topic. I personally try to develop some sort of identity for a plugin when I make it. And Icon/Logo is one of them.

Making icons would be the least of my issues. I would just need to know the correct dimensions and all that

But yeah a plugin default icon would be nice, many people don’t write a manual I can see them not making a icon too.

Also many old plugins would have to be updated too to this new type of display and some might not get updated due to current creator inactivity.

GIMP has some icons, but they don’t look good.

And, quite amusing, it uses both icons and text for some dockers, and just icons for others: 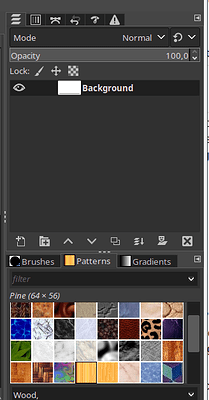 I’m not talking about getting icons from gimp. I mean the icon design of gimp is not good. If it is such a bad design, I prefer to use text.

I think it is ok to have default icon, if the author did not make one.

Well, there are some old plug-ins, because the author is not there, they will use the same icon, it is difficult for you to distinguish

Krita can (and should in my opinion) set its standards

No one can unify the artistic aesthetics of each person, and then various icons of different styles may be mixed together. It is also impossible for us to hire a professional graphic designer to design the right icon for each plug-in

I myself would actually prefer horizontal row of icons than vertical. Vertical leaves plenty of space unused. It probably isn’t even an important space since it cuts into the horizontal space but I still see it as a waste of space

I think for plugins, there could be just one icon that all plugins use by default, which removes the necessity of desigining your own plugin (though it would still be better if they did, or at least used some non-default one, to differentiate between plugins). Also there are still all icons from the Icon Library: Krita Scripting School , note that icons mean different things in different contexts, so an icon that is used in some other place, for a docker would mean “ahh, that’s that docker, from that plugin”.

I myself would actually prefer horizontal row of icons than vertical. Vertical leaves plenty of space unused. It probably isn’t even an important space since it cuts into the horizontal space but I still see it as a waste of space

Vertical tabs restrict the amount of dockers I can have (and their sizes too). Add 4-6 tabs and UI is unusable (and you cannot see text) anyway.

That means I am not using the whole potential of the app.

So I would happily trade 64/32 pixels column for an ability to have more options available for me at the same time.

Vertical pretty much seems to be valid only having these large amounts or panels. I’d say make it a right click option on tab headers to switch horizontal and vertical (and auto switch when you’ve got 6+ panels stacked with a checkmark for on/ off).
Similarly, you would want to be able to switch vertical tabs from left to right locally, especially for dockers on both sides of the screen.

This sort of customisability doesn’t hurt anyone, does it? In the end everyone has their own preference and if you can reasonably accommodate for more that makes for more happy people (from a users perspective).

E: What I personally find concerning about Blender’s development is that the UI is overhauled multiple times, moving headers, tabs, in panel column arrangement, etc. At some point, especially older users, seem to have lose their way around the UI. Plus development comes to slow down with many UI iterations, some of which aren’t for the better but for consistency’s sake… and then there’s a new iteration again. So IMO customisation could serve to balance these efforts out.

This sort of customisability doesn’t hurt anyone, does it?

There is actually cost for customisability. Basically then there is more than one path in the code, and then you gotta make sure all of those paths work, even those less frequented ones, even after various changes to the functionality. And for multiple years, potentially.

Of course some customisations are worth it.

This sort of customisability doesn’t hurt anyone, does it?

There is actually cost for customisability. Basically then there is more than one path in the code, and then you gotta make sure all of those paths work, even those less frequented ones, even after various changes to the functionality. And for multiple years, potentially.

Of course some customisations are worth it.

True, there’s a trade-off to that. But for things which result in endless discussions without general consensus, which may be the case here, I would consider it worth the effort (from a user perspective).

By the way you guys have done a terrific effort on Krita, really like it thusfar!