Here a small description of something that could be useful I think.
(Useful for me sure

, but maybe useful for other users too

My idea is to be able to store some comments on layers, ideally a right-click on layer and then “properties” menu to display layer properties.

Currently, I use a text file in addition to kra file…
It’s better than nothing but:

Solution to anotate directly by drawing on a paint layer or in vector layer is a workaround but:

The Layer Properties dialog box could be completed with a simple text editor to take note about layer content. 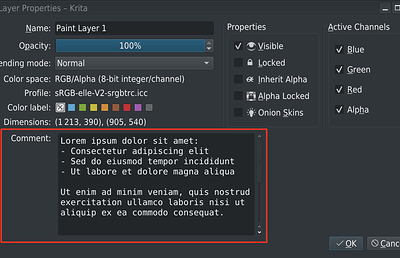 Note: editor as a rich text edit could off course be implemented if it’s not too complex to implement/maintain
If a rich text edit is implemented, please take care about merging of rich text content that could be a little bit more complex and plain text (cf. below rules defined about layers merge)

Note: in case of a rich text editor is implemented, at least:

Note: an updated mockup can be provided if needed

When a new layer is created, there’s no comment

Duplicate of a layer

When a layer is duplicated:

When a layer with comment is deleted, there’s no confirmation, no warning (like it’s made for a layer with painted content)There’s no reason to have an alert/warning about this more than

When opening the property editor, if comment text editor need scrollbars, scrollbar is on top (let user start comment from beginning)
But cursor position is at the end (let user continue to edit comment from the end)

Keep in mind that it’s always a “merge down” and then, bottom layer is always the final layer

When layers are merged, the following rules can be applied:

Note: When doing multiple “duplicate layer” and then “merge” actions, comments in final layer would be awful
A solution would be to ask user if he want to merge comments or ignore comments…
But I think this case should be ignored because it’s a workflow breaker
And the most simple case is to let user manually remove unwanted merged comments from final layer (easy as merged comment are prefixed with a separator)

When a layer is pasted (ie: right click on layer>copy layer and then right-click>paste layer):

Note: when a group layer is copied/pasted, rule is applied for group layer and all sub-layers

When a layer is cut/pasted, comments should be unchanged

Copy/Paste a selection from layer

Only a copy/paste of a layer should impact comments.

Should be concerned by this feature:

We need to easily spot layers with comments in tree without overload current layer row.

A new icon on right side is added according to situation

Note: for a group layer with sub-layer for which comment are set, property value is:

According to what user set in comments, content can be heavy and oversized to be properly displayed in a tooltip. 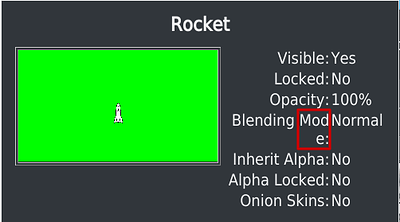 Note: no time for now to write it properly, just write the idea

Status is saved in kra file

A document made from a previous Krita version won’t have comments; then consider there’s no comments.

For retro-compatibility, a document made with Krita X+1 must be able to be opened with a Krita X-1

This is a technical part for developper but an unknown XML node and/or attribute might currently be ignored when maindoc.xml is loaded.
Like current files in layers directory, in maindoc.xml, a reference to a text file *layerN.comment could be a solution.

Ideally, the comment property would be accessible in python:

This will allows plugins to provide extended functionnalities around comment (markdown formatting, direct editor in docker for selected layer, …)

Currently the Node class is the base class for all layers types.
But also the class used to manage paint layer type.

The comment should also be visible without opening the properties every time i.e. by hovering over the node in the docker and layers with comments need an indicator in the layers docker otherwise every layer would need to be checked for comments every time one opens a document and doesn’t remember/know if layers have commets.

Here an example of what it can be: 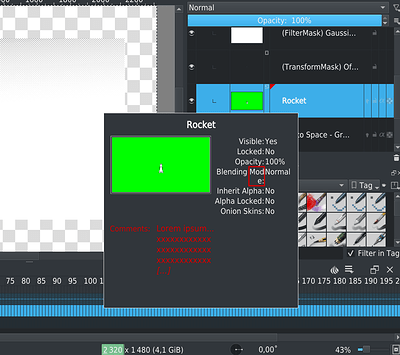 Concerning indicator that a comment is set on layer, rather than adding an icon, I added a small red triangle in the corner, like some spreadsheet software does.
Not sure everybody will like it, but:

But ok, all ideas are welcome.

And having the comment content in tooltip, I don’t know.
Currently, tooltip is not displayed properly, and tooltip layout might be completely reviewed is comment is displayed into it.
But I agree it’s interesting to have it quickly without having to go in layer properties.

I like that indicator, it’s just what I would expect.

I like this idea. It would be easy enough to store in a .kra file. However, you need to think about what should happen if two layers with comments get merged, and what happens when part of a layer is copied and pasted.

You’re right, I didn’t think about everything…

I have rewritten the feature request to properly take in account remarks.

I still have some things to think about/describe, I’ll try to finish this tomorrow.

Here an example of what it can be:

Concerning indicator that a comment is set on layer, rather than adding an icon, I added a small red triangle in the corner, like some spreadsheet software does.
Not sure everybody will like it, but:

Why not a dot over the icon or something instead? The triangle seems harsh on the eyes if you have a ton of comments but it works. And maybe use kritas current accent color so it respects the active theme.

Why not a dot over the icon or something instead?

Maybe, but if you could provide an example mockup that will be easier to visualize

Taken this remark in account as a note
I tried to use label color to avoid having a contrast between labeled color row and triangle, but if triangle is in first column, it could be a good thing to use highlight color theme

I tried to provide a solution.
I have to confess that I’m not entirely satisfied by my proposition, but it’s a base from which we can start to discuss about

However, you need to think about what should happen if two layers with comments get merged, and what happens when part of a layer is copied and pasted.

Still have to review tooltip case.
But I think current specification start to be usable?
Even if i probably didn’t think about all impacts 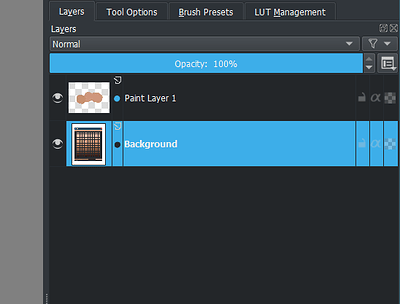 that or perhaps a new column showing that it has a entry with a new icon next to the lock sign.

I just feel something more round to be more pleasing. I hate comment signs in excel with those triangles. if you have one or two it is okay. but if you make too many you just cant see it because it is on a corner between cells not on the cell itself.

But I think current specification start to be usable?

This is looking really good. I’m not sure about the monospace font, that’s my main quibble. I get the pros with simple indentation and so on, but we’ve got a semi-rich text editor available. The proposal itself is definitely at the right level now.

Is this something you want to code up and make an MR for? If not, it’s interesting enough that I would like to discuss it with @IvanYossi – and see how we can implement it.

I’m not sure about the monospace font, that’s my main quibble. I get the pros with simple indentation and so on, but we’ve got a semi-rich text editor available

Yes, I know Qt provides rich text edit and I already used it to build a rich text editor for a plugin, it’s not really difficult to implement in Qt.

And in this case, I prefer to have a monospaced font.

But if having a rich text editor is not a problem, I can update the feature request

Maybe text editor used for Text tool can be reused, don’t know if it’s been implemented as a widget or directly in text tool interface

Is this something you want to code up and make an MR for?

Unfortunately my first and last attempt to make a MR was a such failure that I don’t feel comfortable to start to code it.
And I already have my BuliCommander plugin, 2 another plugins, and one animation on which I’m currently not really progressing…

So I think it’s better to wait a developer is available to implement it, it will be implemented faster than if I try by myself.
But I can try to create feature in phabricator if it can help.

Here a version with dots.

I don’t know then. on the corner it does feel the triangle to make a bit more sense I guess.

Adding on your mock-up I made one more option of the circles besides the name of the layer. As that is where layer specific properties are shown. 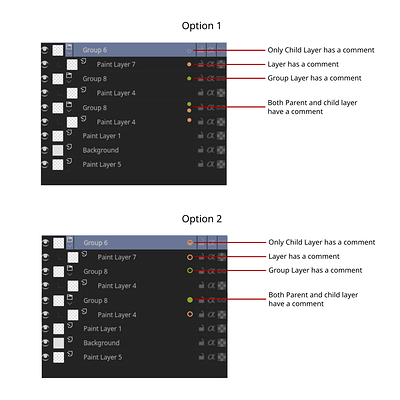 Option two is using single circle to show the state.

=> Option 2 seems better to me

How colors are defined?
– Group layer is green and paint layer (or any other layer type) is orange?
– According to layer color label?

I think color should be defined:
– According to color label, so possibly many colors in layer tree
or
– According to current theme (use of highlight color as proposed by @EyeOdin), so only one colored dot

I’m not really convinced by right alignment for the following reasons:
– Currently on right side, there’s only icons on which it’s possible to click on to change a layer property
– Number of columns is not fixed and can vary according to layer type and layer options, then comment dots won’t be aligned
– Adding another one column on right side overload the row
– Contrast between dot and icon is strong

Opening it with a click on the right side would not be a bad idea though. I think it would make it easier for productions even though it does not affect the pixels directly. Uhm mmm food for thought.

But there is precedent to something like this. Blender on the outlined also has 3 rows of icons on the right for each object on the scene. However you can adjust the visibility of what you want to see on that side and you have like 7 icons you can display in total. I usually add one so i end up with 4 in display there.

On krita layer styles display acts like a guest icon on the side. I don’t see why you could not also with the comments.

Clicking the icon and opening a window with just the comment does not seem bad at all.

Yes, but not completely.
Once icon is visible, click on it change Fx status to active/inactive, that’s not just an indicator.

But you’re right, if a dot is added on right side it could work like icon for Fx, and if visible a click on it display properties dialog box to let user read/edit comment…

But in this case, I prefer to have real icons

(Sorry for icon quality, drawn quickly but this is to illustrate idea)