Now all Krita, CSP and PS all have a Liquify feature. I’ve tested all 3, and Krita’s is significantly slower than the others. It’s almost unusable on even mid-size canvas (3000x2000). PS’ fastest and CSP is bearable.

I know using Liquify with a selection makes it a bit faster, but it’s rather limited. And, to be frank, even with a rather small selection, it’s still painfully slow.

It’s not a show stopper because we can use Mesh transform in most cases. But missing such a important feature is still resentable…

You might want to turn off the in-stack transform preview in the settings and try it again.

You might want to turn off the in-stack transform preview in the settings and try it again.

I’ve tried “Accurate” but it’s still really slow. “Fast” is okay, but the name implies it’s not accurate so I don’t know whether I’m supposed to use it…

The Fast is accurate(in terms of offsets) too, it just shows the layer a little differently during the transform process, if you’re using layer blending modes. The result is all the same regardless of preview methods as far as I remember.

I actually tried CSP’s liquify tools the other day and was blown away by their speed and responsiveness when compared to Krita’s. Personally, I’ve always wanted tools that feel more like acrylic marbling. Really hoping in the future that Krita looks into optimizing that area because it really could be so much better.

Maybe this will help regarding the acrylic marbling stuffs : Liquify tool problem... Any alternative?

I can’t compare to Photoshop or CSP but Gimp’s liquify is leagues better than Krita’s. It doesn’t lose quality like Krita and the speed is astonishing in comparison.
I wish it was possible to port Gimp Liquify into Krita.

Are you sure; Gimp’s liquify was the worst of the worst liquify I’ve ever used when I tested. Photoshop’s is the best in terms of preserving the quality, but of course it is the case considering where photoshop’s coming from.

‘Worst of the worst’? Krita, hands down.
Now, how bad is Gimp compared to other apps? I couldn’t know or test, like I said. I don’t have access to PS, CSP, Affinity or similar (paid) programs.
Here a small video to illustrate my experience between Krita and Gimp.

You can try the trial version of Clip Studio

Here is a video comparing krita, CSP and PS：

One mistake in the video is that PS can liquefy multiple layers through “smart layers”.

Krita’s Liquify used to be fast. It is horribly slow now, please bear in mind I have a really fast desktop (Intel 12900, RTX3080 Windows etc) and the Liquify tool is even very slow with small strokes. I do not know why the speed of this tool degraded over the years.

I feel like this tool started calculating the distortion on the whole image instead of the section where the brush could be.

In the Tool Options docker did you tried changing to Accurate with Instant Preview or even to Fast?
The fast option let the Liquify Mode near instant for me (Ryzen 2400g).

Still slow I even set the spacing to .3

I feel like this tool started calculating the distortion on the whole image instead of the section where the brush could be.

My recommendation is to make a selection before using this tool, because indeed the Liquify compute the whole image (or selection) even if the brush is small.
This might be a good candidate to improve this tool, limit the area for a quadrant a little bigger than the brush itself.

Krita’s Liquify used to be fast.

Yes, I’m sad about this situation too.

Technically, the speed hasn’t changed. The rendering method changed and the old one is still existing in the Tool Options. Before Krita 5, only one rendering existed: the one named ‘Fast’. The two other new ones were added at Krita 5, the “accurate” and “accurate with instant preview” and are slower but offers a sharper preview and render all the blending mode and opacity in the layer stack. Sadly, the slowest method of all −the “accurate” one− was picked as a new default and it lead to Liquify being terribly slow.

I wasn’t part of this decision and I’m still questioning it, because I can’t use the Liquify deform with this default now, even on a very good computer.

My guess about what had happened is (to take with a pinch of salt): It was a feature part of a sponsored new transform “Warp” (by Blender Foundation, afair) to warp photo bashing on top of texture’s UVMAP or file (A 3D software texturing need). Layers with those textures often have “blending modes”. The Fast mode" had no way to show the “blending mode” during the transform, so a new “accurate” mode was made as part of the sponsored work and then put as a default.

Unfortunately, it was made at a big cost; slowing down all other transform operation, especially “Liquify”. I really disliked it. At first, the “Fast” rendering option wasn’t even part of the “Tool Option”, it was something to activate in the Settings of Krita, under “Performances”. I asked for at least getting the option “Fast” back in the Tool Option during the beta of Krita 5.0 and fortunately it was accepted.

That’s why now the workaround is simple; turn the rendering to “Fast” in the tool-option and it will be fast as before! But who really knows that?..
Also, recommendations: use the Liquify not on the full canvas but in a rectangular selection as @Daishishi mentioned (eg. around face, or part of the body you want to deform, rectangular selection is just a Ctrl+R away ). If you need to do it on the full picture, apply a “Trim to Image size” first to remove all paint stroke that are recorded outside of the canvas. A last tip: the Filter “Mitchel” is a good one for not having artifact on the edge of the selection while still having a bit of sharp deformation rendering.

All in all, “Liquify” in Krita 5 really has now a poor ‘out of the box’ experience for newcomers, and that’s a shame because it’s one of the core features for digital artists.

I rarely used Liquify in Photoshop, I liked “Puppet Warp” better. In Krita I prefer the Mesh option: you can use the handles of the controls (or hide them) and you can determine the number of divisions of the mesh: 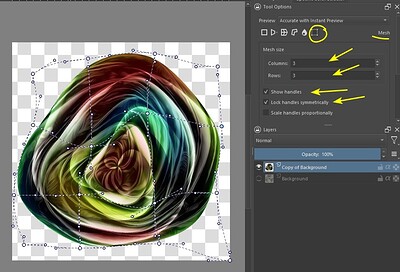 My recommendation is to make a selection before using this tool, because indeed the Liquify compute the whole image (or selection) even if the brush is small.

It is still slow even with a relatively small selection. The “fast” method is faster but it has rectangle artifacts around while brushing which makes it almost unusable.

The liquify brush was the main reason I moved my work to Krita back then because it was such an awesome tool and it was much better than what Photoshop offered. I do hope that the devs make a priority to get this tool up to the proper usable speed.

it has rectangle artifacts around while brushing which makes it almost unusable.

This is a regression in 5.1.3 and has been fixed now, either download Krita Plus for latest bug fix or wait for 5.1.4

I like it too, but the downside is the liquify brush use bilinear algorithm, so the image blurred out quickly. Hope it can get better image quality preserve.