Use this thread to discuss your artwork for the June 2022 art contest. Share your work in progress artwork, discuss things about the contest or give critique to other artists in this thread.

The place to share final artwork is in the Art contest thread here - 🎨 Monthly Art Contest - June 2022 - Topic : Pervasive Landscapes - Sinister vs. Serene. This thread is only for discussions

This seems like a fitting place to share the timelapse of my entry, if that’s all right, and I’ll share my process as well. (It’s a little long and detailed of an explanation, but hopefully there’s something interesting?)

As suggested I came up with some thumbnail sketches first. They might not look like much to anyone else, but the important thing is that I know what ideas I was trying to visualize and put down.
When I had an idea of what I wanted it to look like, I blocked in the colors and started painting over it. Since the composition was so loosely defined, I just had fun trying out different brushes and seeing what sort of texture I could get, modifying them on the fly. Other than one of the RGBA brushes for the grass and “Texture Crackles” for the storm, most of them were originally based on “Texture Impressionism” because I’d found it was a good basis for spreading out various textures, from the clouds and reddish flowery bits to my custom grass brushtip (somewhat visible at the top-right).
I wasn’t sure how it was going to come out, but I thought the texture of it ended up pretty neat. Weaknesses of the piece would probably be in the composition detail (not my strong suit); the foreground feels a little empty, and it feels like there could be more range of value (especially darker ones). Topic-wise, while the storm feels pretty sinister, I’m not sure the plain is overly serene; it looks a little windswept already. But overall, I think it turned out pretty well.

I’m not sure how much feedback I’ll be able to give on everyone else’s pieces, but I look forward to seeing them.

Thanks for setting this up @raghukamath

Here’s a batch of thumbnails I just finished: 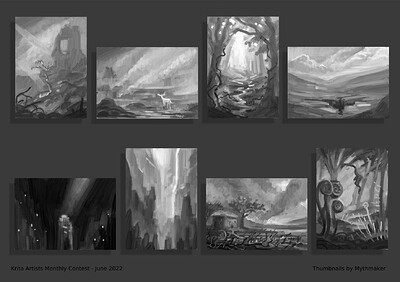 With these I’m basically combining ideation, composition and value studies - though the generation of ideas is the most important part. Ideally I would do further iterations of any one I decided to take forward to the next stage. I tried not to labour over these, but still ended up spending about 15 mins on each, so about 2 hours in total.

@freyalupen Did you want feedback on your piece?

I mean - I think that should be assumed if people are posting stuff in here anyway: It should be a place to learn and improve through respectful discussion.

I wasn’t specifically looking for feedback, but of course I wouldn’t mind it either. Mainly I was just attempting to participate in the discussion.
On which note, I see that your sketches are much more detailed and thought out than my 5 second scribbles; value and composition studies are pretty much the opposite of what I did. It makes it seem as if any of them could easily be imagined as a finished piece, just by looking at them.

I wasn’t specifically looking for feedback, but of course I wouldn’t mind it either.

I feel a bit hesitant because you’ve finished your piece, but I think there’s good potential for development if you want to work on it, or try another iteration.

I quite like the textural qualities of the piece - the way you’ve used the brushes to describe organic terrain.

I do find it quite a difficult image to read though because the end result is quite abstract. You mentioned the lack of values and I think that’s an important point because without them it ends up looking quite flat - there’s not much sense of depth, so I’m reading it like a top-down view; kind of like a textured map.

That’s also in part because of those textural brushes - that can have a flattening effect if the texture doesn’t follow the form of what you’re painting.

I think that’s probably where I would start - to see if you can better describe the perspective you laid out initially by adding values.

I wrote a bit about atmospheric perspective, including a basic tutorial, in this thread: A sunrise that is relevant to the plot

The transform tools can help with moulding textures to form. It might help to reserve textures to areas which are lit and particularly areas where you want the viewer to focus; Then omit or reduce them in shadow areas - there’s less risk of texture disrupting your forms then, and allows more space for the eyes to rest.

I hope that’s helpful and not discouraging. Thanks for sharing your process!

I will be participating I think but have quite a lot of other work I need to finish first.
Will follow this conversation though because of its educative value, great to see this happening!

My two cents, it’s fair to assume that critique is fine in this thread because it’s the point?

Yeah - It’s just giving feedback isn’t so established here; Not like the former CA forums for example where it was an intrinsic part of the site from the start, and people knew what to expect after years of examples.

There’s also been problems here in the past with people not communicating their feedback very well, and others not being very receptive to it.

So I agree it is largely the point of the thread - I’m just being tentative for the above reasons.

I hope that’s helpful and not discouraging.

It’s indeed the former and not the latter. Both your feedback and the topic you linked were interesting to read.

I can definitely see what you mean about the bottom part being like a top-down map- like I could chop it up and use it as videogame textures (if it was tileable). That’s something I have a bit of experience with, so I guess it’s not too surprising. Creating depth is something I’m not so experienced with, so I may get around to trying out your suggestions sometime soon.

@edgarej Did you find this thread? - I meant to @ you before to say ‘look what we’ve got!’

I hope you’ll have a go at this one - I know you used to do EOW.

By the way - Your last contest entry was really nice, so I hope you didn’t take the vote result to heart.

These are my thumbnails. My idea was, that the plants grow over the ruins of a ukranian city. 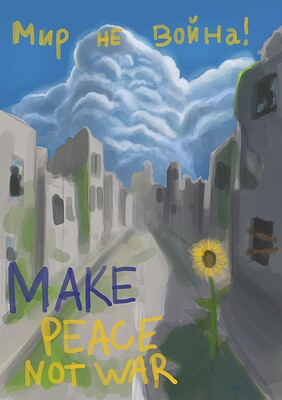 Hi : )
This thread is a good idea indeed.

I don’t know if I’ll be able to finish an artwork, but I’ve already made a few thumbnails (without any specific idea). 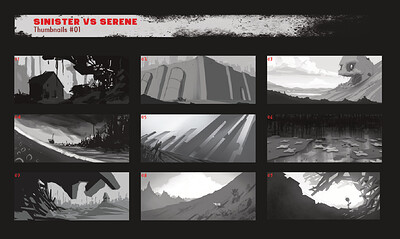 I really like number 6, but that’s just because I want to paint water lilies and reflections in a pond ^^

Anyway, I’m open to any feedback, whatsoever. So don’t hesitate to suggest things, I’ll do it too if anyone wants.

@lehko How about that skull ‘fortress’ overlooking a peaceful pastoral/farming valley, with dribbles of pollution running down from its jaw and killing vegetation?

This was my second favorite!
Although I found the image a bit too plain, your suggestion could add that extra touch I’m looking for, so thanks : )

I think they all look promising. I’d probably go with whichever you feel will have the strongest sense of narrative and mood.

I do like the idea of the tall industrial structure looming over the landscape. There’s something about number 2 I’m drawn to - could be a good one with a tuned composition and lighting.

Yes, I like this one too. Like you said, it needs some refining (probably a lot actually). Maybe I’ll save it for something else, or it’ll end up in the “endless WIP” folder that I guess everyone has

I’m going to rework my three favorites a bit and see where that takes me. Thanks for the feedback !

the topic is something of a weakness. I have not gotten hold much of how to draw landscape, therefore i thought - why not as well try to join and have reason to create landscape so I could learn something even if i dont end up finishing it.

Love the value thumbnails currently posted here. Really helpful for someone like me who struggles in this part.

I have no subject yet , but did some sketches.

@lehko I love the one with skull, swamp, and flower? the have this after a storm feel of peace but you know something bad or sad happen. hahaha. Still up to you. The swamp is also giving this ominous feel like there is a river spirit lurking underneath ready to drag unsuspecting visitor. Those are just what i got XD.

It still whatever up to you. Whatever end up being the finish piece, im looking forward to see it.

I have not gotten hold much of how to draw landscape, therefore i thought - why not as well try to join and have reason to create landscape so I could learn something

Exactly! - Contests can provide good motivation to practice things you haven’t done before and work within set boundaries.

I haven’t done many landscape paintings myself - I usually paint environments as a setting in a character painting.

Thanks for the heads up Myth. Yes I turned in an entry. I hope you are doing very good sir.

at this rate i don’t think i can submit. I did some sketch of the idea i really want to draw. something like a swamp with odd trash and some tiny creatures to make it wee bit alive. I still want to share what little i have done. 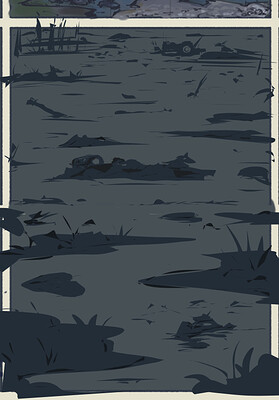