I opened again Clip Studio today.
Noticed one thing :
stroke rendering performance in this app, is just way too pushed(especially with small size brushes).
No matter how sharp or how complex the brush settings are, the program tends to offer real time performance when the brush size is small(1 - 50 pixels).
I don’t know how these Japanese engineers managed to do that, but nothing compares to that kind of performance on the market. They beat everyone on that side, even Photoshop or Sketchbook.

But… I prefer Krita. For how the design of its workflow is easy enough once you get the hand of it.
And also because, well, it’s free, and has a brush outline preview which takes the actual form of the brush tip. But yeah, there’s this experiment.
I’m still in CSP. Drawing with different tools for a while, and I notice this awesome real pencil brush
the app possesses. Super sharp, natural like, yet nice strokes(thanks to the ability to deactivate anti-aliasing no matter the brush tip you use). Simply perfect for a digital pencil brush.

I wanted to recreate it in Krita. So I exported the materials as png in their original sizes.
Afterwards, while trying to match the settings, I came accross some cons :

Oh, I even did another test.
In the same file I use in CSP, I cropped my canvas to a new smaller resolution, and it happens…
At the speed of light ?
I even undo and redo… And it’s like… a snap of my fingers !?

So the verdict now.
Krita really has awesome features as of now, and I’m sure more will come in the future.
However, better things could’ve been done to improve its performance. I don’t need to tell you.
It’s currently not yet ready for high quality brushes, I would say. (the aura pencil hard brush incident is another proof to this…)
Also, I suspect that the reason CSP is fast… is because some japanese engineers worked on it.

There’s a saying which states that Japanese people are excellent at tech optimization for some reason. Maybe that’s why CSP is very very fast.

I have the demo of CSP and like it a lot. I have found that there is some lag initially when using a high quality brush, though it is momentary and performance after that is very good. I tend to think of CSP as a kind of photoshop ‘lite’ more geared towards art obviously but very capable. I find it easy to replicate some of my favourite brushes from photoshop in CSP and when my PS subscription ends in a few months I think CSP along with Krita will serve my needs very well.

Hello,
Besides the sharpness loss on Krita the brush end up visually similar to the one on CSP? Would you mind sharing the Krita Brush you made as a bundle? I’m got curious as at it looks like.

Thanks for sharing the Brush. I don’t remember coming across a pencil brush exactly like this, really liked.

I see what you meant by this, maybe on my case was more prominent. I attached a video bellow to show it, if this is what you meant I stumble across a weird solution, it is include in the video. I check the box for Auto Precision and the lag was gone, after unchecking and leaving at the original value the lag was still gone.

For me this wasn’t present at all. Kinda weird.

I experienced this before, it always related with having Pattern active. In your brush if you disable the pattern you will see this lag disappear.
When I saw this happen usually was with large Brushtips and/or textures (1000x1000), sometimes with reasonable brushtip sizes and 512px textures. Maybe it is also the encoding or ‘quality’ of the texture. Someone more knowledge could investigate this.

Subtract brush mode in Krita works differently than in CSP. In CSP it’s similar to Photoshop, and allows to make the grays in a texture to appear in a sharp manner. In Krita, those grays are just not possible to obtain, in my opinion.

Really? Mathematically speaking the subtract blend mode is really straightforward and simple (Brush pixels values minus Texture pixels values). If you’re using subtract on CSP and PS and having different results on Krita this led me to believe the former applications don’t have the ‘vanilla’ subtract mode, but a slight modified one.

Maybe it’s because Krita doesn’t support application by brush tip rather than by stroke.

This is a wrong assumption and I see different people making it, maybe because it isn’t explicit on the Brush editor. By default Krita apply texture to it’s strokes by brushtip. To have Krita texture the stroke instead of each brush dab you have to uncheck the Enable Pen Settings into the strength parameter, and set a desired texture strength. I talked about this here.

I highly recommend you reading the topic above, if you already didn’t, to see some of the new proposed Brush texture modes. It may already solve some of yours complains about Brushtip and Texture interaction. If you use Linux or have access to a Live USB with a Linux distro, in that topic there is an appimage so you can test the new modes.

Unlike CSP, or Photoshop, Krita has no builtin solution to add noise to custom brushes.

Maybe higher the Randomness or lower the Density in the Brush Tip can make a similar effect as noise checkbox, I guess

Can you share some screenshot with few strokes of the brush in CSP?

Here’s a screenshot of the brush in CSP. 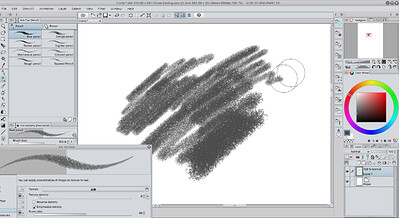 Thanks. I think this type can be achieved in Krita, not the exact brush but similar ones.

I think this type can be achieved in Krita, not the exact brush but similar ones.

I mean, I already tried to recreate the brush in Krita, trying to match the settings based on what’s in CSP, as much as I could. Of course the result isn’t exact just like in CSP. At least, for the moment, that is.

Well, you wouldn’t expect to recreate a Krita brush in CSP perfectly either, since there is plenty of options Krita has that CSP doesn’t. Programs do differ in various ways.

Is this issue of lag a thing a few frames of difference?.. You guys can’t even react good or bad with the lag you have.

CSP is top of the market and no one is able to go as fast. Of course if you compare with first place everything is bad… Took a bit but Krita reached PS levels of performance and you should be proud of it, krita 4 did it.

Also I get a feeling you don’t calibrate your settings to try and go a bit faster with your rendering and your brushes.

That or your computer has some issues handling work loads and you might need a better computer also. Not that I am saying that Krita could not improve because there obvious issues with it in performance but I think you have 2 issues and not just one there with the reports you give.

The canvas cropping idea came along the way because I needed to crop my canvas to save the brush texture. This reminded me of another issue I had previously, using Krita 4. Sorry if it’s sudden and out of context.

Also I get a feeling you don’t calibrate your settings to try and go a bit faster with your rendering and your brushes.

What do you exactly mean by “calibrating your settings to try and go a bit faster with the rendering and my brushes.” ?

That or your computer has some issues handling work loads and you might need a better computer also.

Off the top of my head on Display Mode try and use a more simple Scaling mode like Bilinear Filtering or Near in last resort.

Also for Big brush sizes Krita starts to loose steam quite fast so if your over like 200 try and adjust your brush spacing to ease the amount of work.

on Display Mode try and use a more simple Scaling mode like Bilinear Filtering or Near in last resort.

Also for Big brush sizes Krita starts to loose steam quite fast so if your over like 200 try and adjust your brush spacing to ease the amount of work.

This is something I hope will be optimized in the future.
I don’t mind having much less steam loss with 1 to 500 pixels brush size.
Bilinear filtering is not 100% viable unless you zoom in enough, especially with lineart.
There’s a noticeable quality loss. I’m staying with Trilinear filtering by preference.

After a few more experiments, I think that the problem lies more with the complexity of a brush tip.
If your brush tip has a multitude of sharp small shapes in it, there’s a potential for lag if you use it.
I have a plethora of brush tips in my library. One of them was 100 of times worse than the original pencil brush related to this thread. It gave me a totally unbearable drawing performance.
Selecting the brush tip alone, leads to constant freezes intervals, even without drawing on the canvas. It behaves like if you were painting with a giant brush(about 3000 pixels so you can guess the speed) except that you’re not painting at all, and brush size is only about 100 pixels.
I really don’t know why it did that.

But maybe an investigation into this could lead to critical performance improvement.
I have no idea.
If you’re curious, let me know, and I’ll export the brush tip.
All you’ll have to do next, is to replace the pencil brush tip with the new one I would upload once requested.

Alright.
The brush tip which cause the lag is “DA Oil Stamp 2” from Ramon Miranda’s Charcoal brushes bundle.
All you do is download the brush I linked here, and replace the brush tip with it.

Well very large brush tips are just slower by nature. My suggestion for those is to try and vectorize that brush tip. It will perform a bit better. 3k is too much.