Hello everybody, I am going to make a storyboard feature this summer ( at least for the northern half of the globe

) as my GSoC project. This is a list of mockups, features and functionalities that we have planned so far: 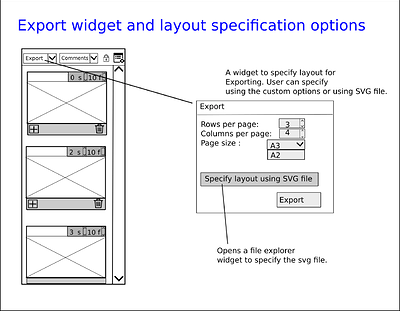 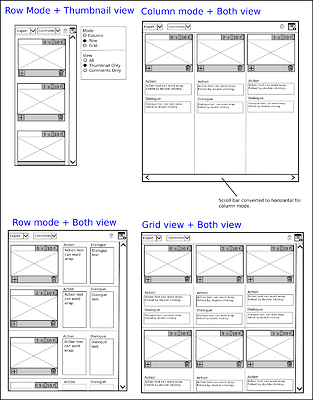 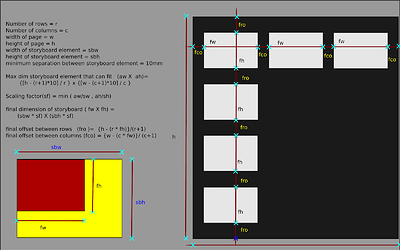 I would love to hear your opinion, improvements, suggestions questions about this

. Also there is a phabricator task here. Also the GSoC proposal here ( Jump to UX Design section for details about UI).

I’ve never tried storyboarding myself, so I won’t be much help here, but I just wanted to say, that this proposal looks very solid! - I’m sure krita will benefit from this feature a lot.
I keep my fingers crossed. Good luck

Looking good! Krita would definitely benefit from this feature I think.

At the moment my suggestions would be:

I also attempted to make a simple mockup of a possible storyboard item: 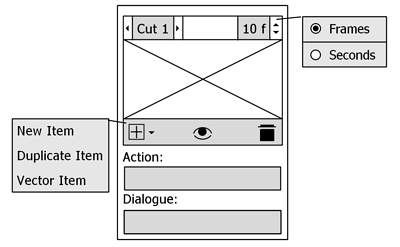 The layout basically imitates your idea, but here are some of the main change reasonings:

This might be another difficult suggestion, but I hope there is also an option to include layering of the Story Items. Perhaps a projected view of multiple layers for each Item? That way you could keep a non-destructive layer for linework, motion, shading etc., allowing you to edit specific lightings/ character movements without destroying underlying layers.

That’s all my ideas aha! Thankyou if you read this all, a lot of this is just wishful thinking that will be difficult to implement, but I hope I can add an additional perspective on things!

Good luck on this project!

I don’t do a lot of storyboarding myself either, but it’s looking pretty solid to me as well!

Spontaneous thought here is that there are a lot of features to get right, and in such a way that they aren’t confusing to first time users. Something like drawing directly on top of the thumbnails feels like it would be more of a if-time-allows kind of feature though. It’s my personal opinion that the focus should be on the organizational features as well having the actual canvas load each panel/frame when clicked

or maybe that’s just me!

I agree with @Kapyia; the drawing on Story Items inside Docker feature wouldn’t make much of a difference to how I would create a storyboard. In my opinion such an option is less important, aside from the difficulties that might arise from implementing this.

Thank you for such a thorough feedback!!

All of your suggestions are sensible and I will try my best to implement them. Some points that I want to clarify:

This makes sense. Mostly if the duration is in sec we don’t care about frames. I don’t think many people would need a duration of 2 sec and 12 frames in the storyboard, it could as well be 2 sec. Is this right?

Include a ‘Cut Number’ heading for each item

This can be done since the place is basically empty. Do you think we should make the name of the field customizable? Like if someone wants to name it as scene 1 or shot 1.

The last addition was a visibility toggle; conceptually it would allow the user to view possible versions of their animatic without specific scenes, allowing them to visualise different story beats in a non-destructive way

This is a tough one. Keeping multiple versions of frames might be difficult. Maybe we can have a “Play Storyboard” function that can play only the frames visible in the storyboard.

I don’t think many people would need a duration of 2 sec and 12 frames in the storyboard, it could as well be 2 sec. Is this right?

Yes this is right! Best to keep it visually simple.

Do you think we should make the name of the field customizable? Like if someone wants to name it as scene 1 or shot 1.

It would be a good idea. I believe it would also help to have the name change be consistent across all Items; I can’t see a scenario where you would change one Item name to ‘Cut’, another to ‘Shot’, in the same Docker. I could be wrong though…

In my limited experience the ‘Scene’ number can apply to multiple Story Items; a scene in a movie is comprised of multiple shots for example. Perhaps multiple Story Items can be categorised per Scene; i.e. have a separate ‘Scene’ entry at the top of the Docker, linking/ tagging the visible Items together. This would help to navigate potentially large Storyboards with multiple Scenes, and Items within them. Upon export, the range of the Storyboard can be measured through Scene numbers, acting like page numbers in PDF export. This allows you to specify which Scenes are exported, and easily create a library/documentation of different elements of your storyboard. Would this require a new file format?

Can’t this effect be achieved by the layers that for each frame?

Yes that sounds right, I was just unsure of how the Story Items were to be constructed

Maybe we can have a “Play Storyboard” function that can play only the frames visible in the storyboard.

I think what you are saying is what I meant

. This would be a great feature!

Thanks for the follow-up! Hope this goes well!

I think what you are saying is what I meant

I think we differ on whether toggling visibility alters the timeline. What I said was that the timeline would stay the same. We would change frames based on the frame number of the next story item.

Ok, I think I understand. The Storyboard Docker would operate as a contained mini-timeline, without influencing the Timeline Docker?

I agree, I think your suggestion to constrain it to the Storyboard Docker is good. And this prevents the computing required to reorganise parts of the Timeline Docker unnecessarily in quick edits.

I hope I’ve understood what you meant now!

it would be great to have a storyboard feature in krita! I suggest to look at other softwares to get some inspiration, in the professional animation world the king of the hill is toonboom storyboard pro (which works in the toonboom Harmony animation pipeline), another software is storyplanner (useful in a toonz and opentoonz animation pipeline, but it is not opensource). There is also an opensource software called “storyboarder”. An important feature would be to create an animatic from the storyboard, also camera movements would be great to do. A connection to opentoonz would be awesome! about seconds and frames: it SHOULD ABSOLUTELY SHOW FRAMES! Every single frame is crucial in animation!

I must say I’m not too experienced when it comes to storyboarding software, so I haven’t used any of these programs

But converting into an animatic would be awesome! And I agree with the frames sentiment, which is why it would be good to have the option between either

I’m in the animation industry since 1996, so feel free to contact me for any question. You could try for free the softwares I’ve mentioned above, there is a trial version, or maybe it would be enough to see some basic tutorials on youtube, so you could understand how they works. I don’t believe in krita as an animation software, there are better opensource options out there (opentoonz, which is used by Studio Ghibli and many others) but for storyboarding could be really a wonderful tool, combining its animation and drawing features, especially if it would export stuff to opentoonz (maybe you could take something from the opentoonz code?). Another important thing it’s the ability to insert e manage audio tracks.

Thanks for the support!

Yes, there are ways Krita can improve its animation workflow, I personally use it for most projects I do

. But for adding audio and SFX, I would export it into another program.

Definitely having a storyboard feature would be great, and I would think that better animation capabilities could be developed in future, if Krita gains a larger user base and publicity.

That would take time, as everything does…

We can export to video using the current features already. So if the frames are arranged in the right manner, this would be easy.

also camera movements would be great to do

Every single frame is crucial in animation

Do u think we should have both seconds and frames(as done in my mockup) or option between frame and seconds(as done in @fullerhill_art 's mockup) ??

hh.mm.ss.ff is the standard, as in every editing software, it’s the “time code”. You should also can choose the frame rate of course.

So after nearly 3 weeks of work, I have got a basic standalone UI for storyboard. This is how the docker looks right now.

This is awesome! So much progress

Is there the possibility to hide the scrollbars if kinetic scrolling is enabled? That might help to declutter the Docker a bit.

And having the units in the frames/ seconds box would be good, but I’m sure you’ve already thought of that

Hi, After 2 months of work, I think we have enough set of features implemented to get the storyboard docker tested. If you have a Linux machine you can help me out by testing this feature.

If you have any feedback or suggestions or ideas please do tell us. If you encounter any bugs, unwanted behaviour or any crashes tell us at the phabricator task.

If you want to see this week’s blog regarding this feature see here.

This is great! I’m a professional SB artist so as soon as I get a break I’ll check this out and give feedback asap, thanks for doing this!