Awesome tips. This thread needs to be sticky.

Configuring custom shortcuts or knowing the deafult ones, as someone said previously, is always something you want to. There’s a lot you can save.

Some of my most used tools are

If you use the palette presets /wheel “right click” you can customize the number of brushes you see there. Settings -> General -> Misc -> Number of palette presets -> enter a number.

I use the wrap mode a lot when I am creating patterns. Why? Because I can apply lot of filters that affect pixels, and get a nice texture from that. Later I will document it 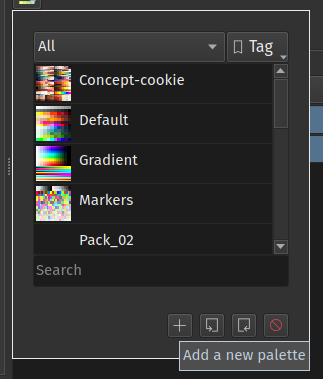 Then it will show you a dialog to create new palette, there you can choose to save this new palette in the current document. 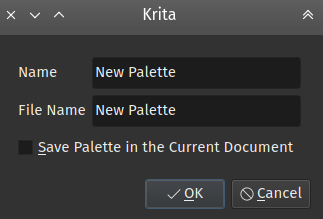 This comes in handy when you have send the file to your colleague while collaborating in a project. If they make a change in the palette it will be saved in the document and you’ll see the new colors when you get the file back.

Tips I make use of:

I didn’t realize that finger-drawing was the reason my brush strokes sometimes went ham on my Surface! It happened rarely, but just enough that it got a bit annoying. Thank you for the great tip malle_yeno, this made drawing on it much more enjoyable!

. If you want more gradients but don’t know where to get them, You can get a bunch from the resources folder on gimp, witch has a lot of good default ones. same with textures.

Isn’t something similar to arranging already possible with other tools for raster layers? Or do you mean something like sending a selected part of one layer onto another one?

Thanks for the great tip! If anyone else is looking for these resources and you have GIMP installed, I found mine in:
C:\Program Files\GIMP 2\share\gimp\2.0

You can assign shortcuts to 'show reference image" and the multiple stroke smoothing modes and use these shortcuts while drawing.

Thanks for these. showing and hiding reference image is indeed useful

I feel like this isn’t really a hidden gem, but not very many people use it… (From what I know)
The “quick settings docker”!! By far this has to be my favorite!
Because I can quickly set the flow, opacity, or the size of the brush tool with a simple click!

To me, it’s a lot like an underrated gem!

Is it possible to crop reference pictures in krita? I haven’t found a way so I do this in Gimp.

I believe this is possible with either the Krita Photobash Plugin on GitHub by @slightlyangrydodo (veryprofessionaldodo on GitHub) or the Modification of the Plugin on GitHub by @EyeOdin to crop reference images (at least before pasting), but have not used these plugins so far and therefore I can be wrong.

Hi there! Just wanted to announce a new major release for Krita’s Photobash Plugin! If you don’t want to read the following text, or want a demonstration of how it works, check out a short video here! Whenever I tried to photobash, I always disliked the process of needing to have a folder with the images nearby, drag and drop them to the canvas or open them as a new layer from inside the application. For this reason I created a plugin to assist you with this task! Some of the major new featur…

Thanks for the ping @Michelist ! Basically, in the photobash plugin you can add images as references, but if there’s a way to crop a reference in the basic version of Krita’s references, it can be done in the plugin.

I believe you can do it without the plugin, but I’m not entirely sure.

Since the reference cut project is on hold for Krita I made this in the meanwhile to isolate my references and it has been holding up connecting to other plugins and OS.
https://krita-artists.org/uploads/default/original/3X/c/3/c31c2949286bb4e222d6e2402f3a4b5a8127a0a0.gif

Would I need to first install Krita Photobash Plugin, then the Modification? (both of which are listed in Michelist’s post) Or do they work independently of each other?
Took a look at your gif and it looks great.

Would a right click on the reference image still allows me to transform it just as it worked before.
Can reference images be placed beside the canvas. gif is showing them being placed on the canvas only.

They are independent so to not cause issues on the registry. Despite the differences I did my best to maintain as close to original and adding new stuff to it as I could, it should be considered as a possible future version if it is adopted for the vision it was meant for.

You can drop the images into the plugins: Pigment.O and Key Enter. If anyone makes a drag and drop feature it will work onto their plugin also.

The “modified” version per-say is made to work with Key Enter plugin in parallel but having both is not needed or even required. Key Enter only extends function. That “modified” version of Photobash was the last one before I changed direction in concept as i am not favoring a Photobashing workflow now and will have a different use case. But my last modified version is preserved to be used if anyone desires.

Just thinking I might want to wait and see what you create as a “change in direction”.

I’m so glad you are addressing this. It will be great to not have to interrupt work flow in order to crop a reference image.

Tip: How to Shrink an Image

Layer styles can be used to add outlines of any thickness to an image.
Conversely, you can shrink the image by setting “Position” to “Inside” and “Opacity” to “0%”. 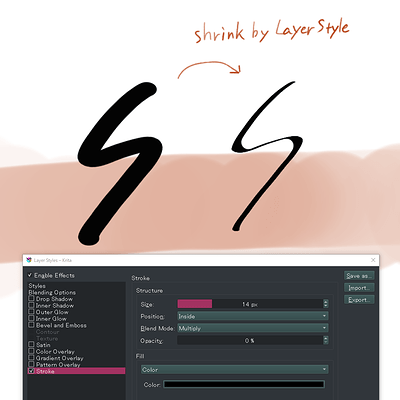 This may not work depending on the transparency of the image, but it may be useful to keep in mind. 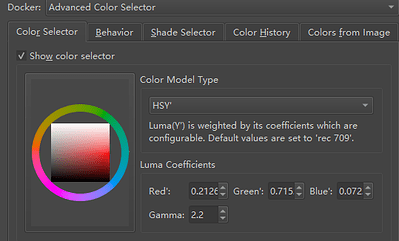 hsy539×326 20.7 KB
This allows for easy control of visual brightness.
For example, keep the position in the rectangle unchanged, and only adjust the hue wheel, so that different colors with the same visual brightness can be selected.

Also, I’ve changed the topic category to Tutorials to make it easier for users to find.