I just completed a small new feature: tool presets. I’m not sure anymore who actually asked for those, but not only do the tools now remember their settings between sessions, you can also save combinations of settings as presets and switch between them with a single click 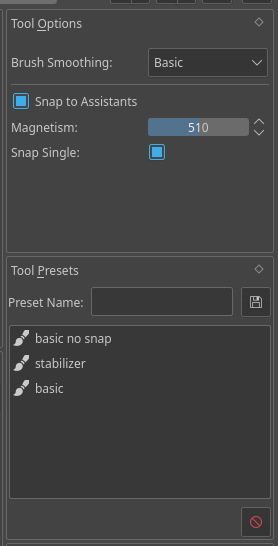 I have 20 buttons + 2 wheels on my pen display, 10 used mostly for one hand, now I will get to change 2 shortcuts there, yay!

Cool to see this.

this might help @SPAC5R with default transform option I think

Thank you very much @raghukamath and @halla, that’s awesomeland very helpful! Great to see that a simple question asked turns into a new feature so quickly. One more reason to love Krita and open-source in general!

Nice boud! Had no idea you were working on this, I’ve been interested in something like tool presets for a while to more reliably experiment with and share smoothing / stabilizer settings, and to make it possible to have dedicated inking specific tools and settings that persist between sessions.

Finally… I’ve thought about ways to allow shortcuts. My initial idea was to have a shortcut that set focus to the docker, and then numbered shortcuts to activate items in the list, but I’m not sure about that. And anyway… Speaking for myself, I use a cintiq + expresskeys, and the expresskeys are full anyway, so I’d be clicking the items.

ETA: I’ve also thought about whether all presets for all tools should be visible at all times, but I thought that that would get crowded, and it would have complicated the code.

As for implementing the whole plugin in Python: it reacts to the KoToolManager global instance switching tools and uses the KisCanvasResourceProvider classes, and those aren’t in Python yet.

I was so fed up after finishing the tagging rewrite part of the resource rewrite that I wanted to just do a nice little feature that i could see the use of immediately… It took me all of Thursday, part of Friday and Saturday morning. Now the follow-up feature requests will probably take longer!

It took me all of Thursday, part of Friday and Saturday morning. Now the follow-up feature requests will probably take longer!

Thank you very much for doing all the work!! Is there anything I can do to support Krita?

Could tool presets essentially replace saved assistants for the assistant tool?
So I could have a preset for “xx° Isometric” as a tool preset and it would load preset assistants.

Similar functionality would also be very useful for the reference image tool.

For the transform tool: does presets automatically perform (but not apply) the specified transformations? That could be very handy if you create icons that need to be scaled down to specific dimensions.

Could tool presets essentially replace saved assistants for the assistant tool?
So I could have a preset for “xx° Isometric” as a tool preset and it would load preset assistants.

Probably not, enhancements for the assistant tool wouldn’t hurt (I have dormant patches for it and lots of notes for other potential improvements) but this isn’t it. Tool Presets just saves/loads the state of the Tool Options widget

Is it a separated docker or it is to appear as an area extended from the tool option? (The former sounds a bit tricky to use.)

Thanks for the work though. I needed this feature so bad.

3 posts were split to a new topic: How can I support Krita?

Can this be tested in 5.1 nightly build on Krita website? Thanks for the awesome work, halla.