I’m trying to recreate a few brushes from another app. I’d like to have better control over the rotation of the brush depending on stroke direction. I did have that selected but I couldn’t get it to do what I wanted. 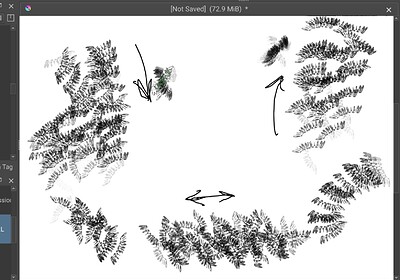 These are the present settings… 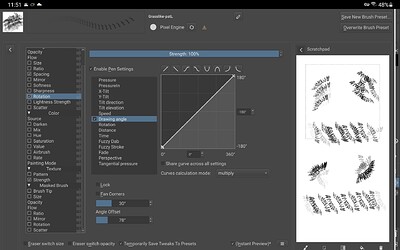 Can any brush experts help me with getting better control of the desired rotation behavior?

I hope for you that it is not related to this bug and only a question of the right setting, because this bug is specifically about the “lock” function of this specific brush setting.

Bug feedback, after the drawing angle is locked, the angle will still change General Questions

But if it should be so, then at least the cause is already found and fixed, but not yet implemented in an available version.

I don’t think you can do this, since there is no sensor for “upward”, “downward” etc. maybe you could do something with the tilt sensors.

Ok. I still don’t quite understand how to get them to do what I’d like though.

GIH may can do it

The bug that @Michelist refers to will give glitches on a locked rotation brush.
@CrazyCatBird doesn’t want such a brush (preset).

@CrazyCatBird You specify what happens for a down stroke, sideways stroke and an upward stroke.
Do you care what happens in between?
If not, I can make one

@TheTwo Using a .gih brush controlled by Angle (Drawing Angle) would work well and you could do some fine ‘sector’ control with it.
However, you’d have to make a custom .gih set of images for each normal brush tip that you wanted to do this with.

@AhabGreybeard sure!
Where shall I send you the tip I’d like?

@CrazyCatBird Here’s one. It’s an ugly thing but it does meet your stated requirements: 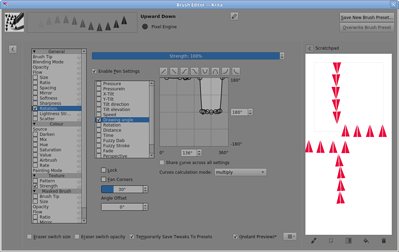 Adjusting the transfer curve involves lots of intemperate language but that’s one of my life skills. I suggest that you make a copy if you want to try playing with it.
You can put your own tip on it because it’s Rotation controlled by Drawing Angle.

Here it is going around a circle: 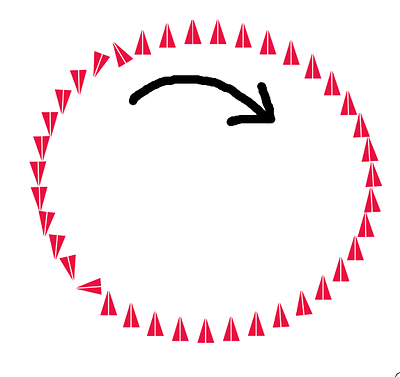 I tried making a little .bundle but had strange error messages. I’ll have to report that later.
Here’s an old fashioned .zipped collection of .kpp file and brush tip file:
Ugly_Thing.zip

As for the animated Angle controlled .gih tip, if you could provide a link for download of the brush tip that you’re interested in, then I’d like to try it, maybe not today

(It looks like it’s empty, but the tip is black colored)

Is it meant to be semi-opaque? 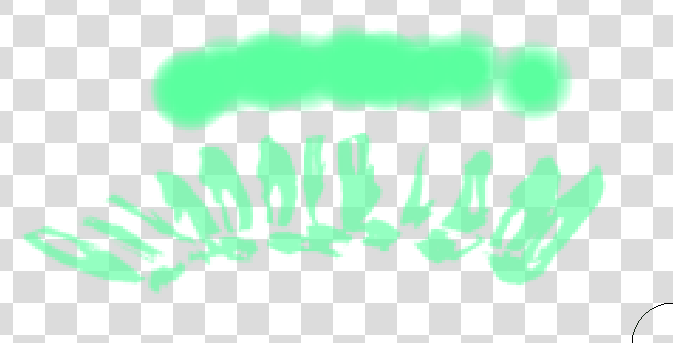 Not really. I wanted it to be more solid.

Just in case you did, I made one with a solid image

Making the animated tips was easier than the Rotation ← Drawing Angle brush preset.
I’ve made two versions, an original image tip and a tip where the alpha has been boosted to 1.0, called ‘… Ab1.gih’.

Painting strokes outward from the centre: 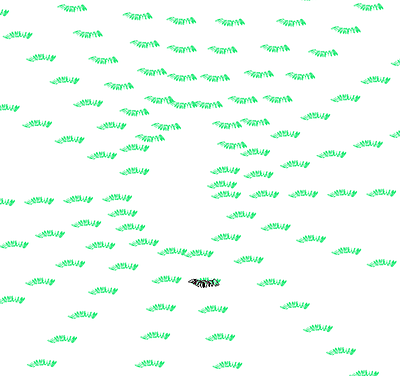 A stroke within +/- 45 degrees of vertically upwards will have have an upside down brushtip image. Outside that range, the tip image will be right side up.
This can be made more ‘specific’ to give a range of +/- 22 degrees by using eight internal images instead of four internal images.

How does the Rotation ← Drawing Angle brush preset feel?

Thank you! I’ll try it when I get back home.

It didn’t seem to be working for me. No matter how I tilted my stylus, it stayed upright. So, I added tilt direction. Now it works just like it did in the other app. (Infinite Painter) 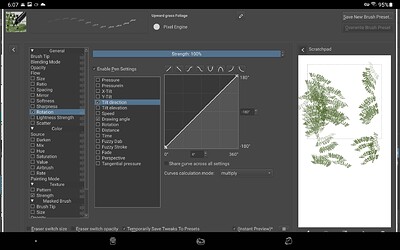 I forgot to ask: how did you boost the alpha? I might want to do that to another brush (it’s too semi transparent also)

I’m totally puzzled by what is happening here.

The ‘Ugly Thing’ .zip contains a brush preset that does work according to what you initially said you wanted.
The Brush Editor screenshot above is not the one I sent you. It has Tilt Direction included but you didn’t say it was supposed to respond to tilt direction.

Also, the test strokes on the scratchpad show brush tip rotations of intermediate values like 30 degrees and 45 degrees.

The alpha boost was done using Filter → Adjust → Cross-channel Colour Adjustment. There is no alpha detail in the original image, except for small amounts of what looks like anti-aliasing at the edges, so that was overkill for the job but it gives immediate feedback and it’s easy to adjust and experiment with: 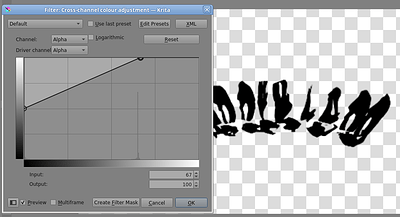 I’m totally puzzled by what is happening here.

I was puzzled by that too. 🤷

Thank you for the alpha boost info!