What music do you listen to when you're drawing?

I mostly listen to Undertale music, a little bit of rock sometimes. What about you guys?

I usually listen to any music maches the mood of the painting I’m working with.

It helps to keep me in the ‘zone’. 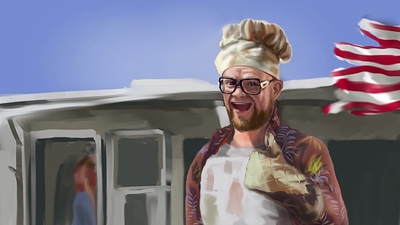 Lofi Hip Hop or a playlist I listen to while programming.
Sometimes some random video game music on YouTube.

Well, I usually listen to different sorts of music. Mostly I just click on an auto-generated playlist on YouTube. If I sorted them in different categories, it would be:

Oh, I love Hamilton! What’s your favorite song from it?

I have more than one because I can’t decide…

I listen to all the same kinds of music that I love! Recently I got into post-rock, and while I love music with lyrics, I think post rock and instrumental is less distracting than music with lyrics. So it is easier to just loose yourself in the drawing rather than the song.

That said, I still listen to a lot of music with lyrics, some of my artworks are inspired by different songs and I’ll listen to those songs while I work.

Their are too many bands that I like, but probably my favorite band right now is “Starset”.

About a year ago I decided to finally check out some japanese rock/metal music and by some strange coincidence a lot of music videos that were apparently region-locked to Japan became available on youtube, and I was not disappointed by what I found.

My current favourite (although unfortunately on indefinite hiatus) is Ganglion.

But there’s a lot of talented all-female bands in Japan that give me a good mood, like Exist Trace, Band-Maid, Dollsboxx (certainly not everyone’s taste but possibly the most talent I’ve seen in a single lineup yet, although it’s more of a side-project of Gacharic Spin) just to name a few.

And lots more bands giving Metal music their very own twist, like Babymetal or if you like it even weirder, Ladybaby (though I heard they’re going on hiatus too

But also some great bands are not new at all popped up, like Ningen Isu.

I have a lot of music, and I’ll listen to just about any genre, but my favorite to listen to when working on my art is instrumental. I like it because words don’t distract my thinking and the sound alone helps me to imagine different characters and scenes. I’d actually like to do some art in the future based on what I see when I listen to certain songs.

Right now I adore Marcus Warner’s music, with “Oceans” being my favorite album and “Liberation” my second favorite.

I love to listen to something from myNoise when working!

It has a wide selection of ambient soundscapes (nature, rooms, music, etc.) that loops seamlessly, gives you full control over said soundscapes (volume sliders galore), and is available online for free!

Rock and Edm music, they kick start my imagination.

I love the “TRAPPIN IN J A P A N” mixes by Ryan Celsius, so lately I’ve been using that for work

Totally time to necro this topic

I haven’t really tried it for painting, but I decided Yousei Teikoku works very well for me when coding.

And I guess I’m slowly growing into a SCANDAL fan too (and no, not just because Rina is possibly the cutest drummer in the world)

I’m also eager to hear more from HAGANE, so far they only have their song “WintrySky” on youtube, too bad I their first album only seems to be available on CD in Japan, can’t find it here neither as CD nor download, and shipping CDs over is quite a luxury

Music usually helps set the mood for my drawings.

For example, some nostalgic Lo-Fi will set my mood to a classic black & white drawing, with a 90s vibe.

Or, Kawaii Future Bass will usually make it turn out very colorful, with a lot of pastel colors.

Genre depicts art style, it’s always been like that for me.

My normal collection of lyrical and instrumental. Lyrical is almost all rock, 60’s - today, mostly 80’s and 90’s, main or sub-mainstream. Decent amount of “alternative”, prog. Ranges from calm acoustic or rock with country elements to things no heavier than Slipknot. Punk rock is almost exclusively Green Day (if it counts). I collected some “almost instrumental” songs since last year that aren’t rock, so I finally have something else.

Instrumental is all over the place. Nothing repetitive and calm because I like music I can actively listen to. “Blah blah 10 hours” is all over Youtube anyway. My instrumental list is 800 strong and I’m always looking for more.

Picking favorite lyrical artists is to fit a square in a circular hole, but, some of my favorite instrumental artists: Chuck Mangione, Jean-Luc Ponty, Focus, Martin O’Donnell, Liquid Tension Experiment, Really Slow Motion, Varien, and Yuko Kanno among 153 others.