​Actuator, is a plugin with a flying docker that you can customize with any action you want.
You can create a sequence of actions to speed up your workflow.
There is no limit on the number of actions you can chain in a sequence.
Plugin version: v0.2

The plugin was designed for Krita 4.4.8 and was tested on Windows 10. However, given that plugin is Python-based it should work on other platforms too. The plugin goes with a small guide on how to use all the features.

The video with me explaining how the plugin works: 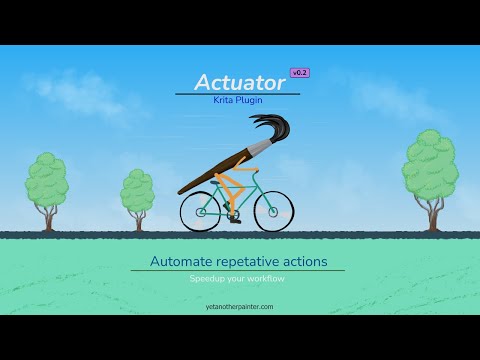 ClipStudioPaint Artists: What features does CSP have that you wish were in Krita?
TheTwo November 9, 2021, 10:31pm #2

Using action can easily lead to problems. Because krita has many types of layers. Not all actions can be used. And when that happens, krita crashes … I guess this is one of the reasons for limiting “task sets docker”. It would be nice to add a simple decision (for example, only for paint layers)
Another thing is that I’m not sure if there is a problem with nodes. I’ve worked on a simple action script in 4.x that had something like “activate previous layer”. It worked fine in 4.0, but after 5.0, even if I activated the previous layer, it would still operate on the original layer. This may be a change in the nodes, but I haven’t looked into it and hope it doesn’t have an effect on this plugin.
Where are all these definitions saved? I don’t want plugin updates to lose my settings. It would be nice if it could be shared with others as something like a resource
For the interface, I’d like to add a separator like the one in the “toolbar”.
Finally, not everything I want has an icon. I’d like to define which ones appear in docker and others in tools/yap. or have shortcuts or something like that.

Thanks for feedback! I will incorporate these (at least most crucial) in next update.

I won’t lie, I had plans to make a plugin sortta like this after I finished what I was doing. This is very depressing.

This is very depressing.

You can always build your own version…

Does people starting to create new text/code editor are depressed because another already exists? No

Does people starting to create new incredible software are depressed because another already exists? No

For users, having more than one possible choice for a tool is always a good thing.
There’s many possibility in implementation of a such tool: from a code point of view AND from user point of view (use different interface, use different possibilities - conditional actions for example - or many things can be implemented)

Then, just look this as an additional motivation to do something that fit your own vision of stuff

what I was doing

Does it include the lch of pigment.o? I’ve been finding lch more and more in line with my expectations lately

Photobash Images. But please be on topic I don’t want to derail the thread. I will probably do another kind of plugin just don’t know what yet.

I just actually tested it. I thought it used the action from the “action dictionary”, but it’s actually a bit different. Action is translated and even includes actions from other plugins (very good). This also leads to a problem: I cannot search, no matter Chinese or English. When I press enter, the error appears. 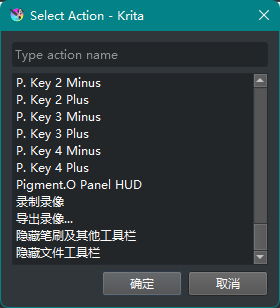 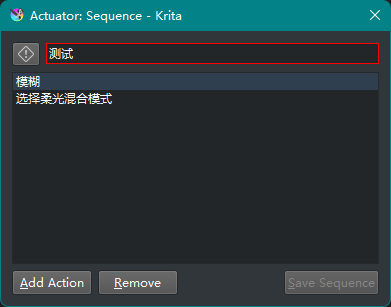 In addition, “sequence title” requires at least 3 Chinese characters. I hope it can be changed. 2 Chinese characters can solve many titles .I found that English is also three letters. It would be much better if you could change it to three bytes

Will “restart” change? It’s too much trouble to restart every time I set it up 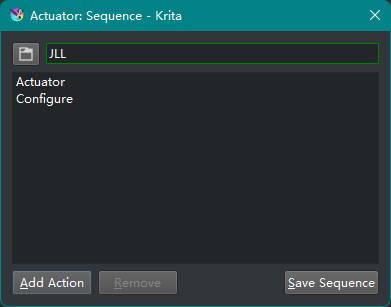 This interface may require a “move up” “move down” button

Many actions do not work (filters, etc.) may be because there are no parameters…
The added parameter I want: fill color for the layer (black white 128gray RGB CMY. It would be better if you can enter a value)

Thanks for using the plugin!

Oh. This is really interesting.

I will fix the sequence length name.

Regarding the error, yes. I need to carefully debug that. Thanks for reporting.

Regarding directory. Yes, the pluging actually looks for actions directly from krita itself. And if some other plugins have some actions, Actuator will find them and you can use these actions in your sequence.

Regarding restart. Yes, I will fix it in the next update. And the changes will be applied right away.

I also have an idea to store the sequence for purpose of sharing or storing for later. For now sequences are stored in krita configuration which user should not bother looking into.

And as a last little thing, I will also include the ability to add separator.

And the biggest thing (teaser alert) which might appear on next updates, I am thinking about developing some sort of a mechanism to have an information on what actions can be chained one after another and which not.

Your videos are tagged as “for kids”, so i can’t watch them later. I have interest to know what is this about. and the possibilities.

Hm. I thought it is an option that unblocks the content for those who under 18.

In short the video tells about plugin and its capabilities.
It goes on what it can do and how to make sequences of actions. There are examples and explanations.

The main feature of the plugin is that you can create sequences of actions to perform a particular task.

So with a plugin instead of clicking buttons to achieve that, you can just make a sequence and use it with one click. And the panel lets you create as many sequences as you want.

Actuator got updated to v0.2

In general, the plugin should be much more convenient to use

Can I assign custom shortcuts to Actuator sequences?

Thanks for choosing Actuator.

This is a feature I am currently working on. 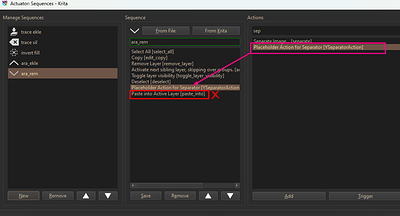 This plugin is very nice. thanks @yetanotherpainter . When I add the commands one after the other, it passes without doing some of them. Could it be because it’s too fast? Do I need to add a time delay between commands? Even if I use separator, it can’t do “paste to active layer”.
maybe you can add a delay feature .(milliseconds)

Yes. There is no way for not to know for sure that action is complete.

The workaround is to add a delay between commands.

Though, i removed this feature in latest update. Seems like i need to revive it again. I will add it in the next update