Hello! I’ve noticed a long time ago (about Krita 4.x) that it doesn’t have such brush. Was waiting to see if one would be added, but it wasn’t so I finally got around to making one myself. Unfortunately, I do not have copics (too expensive for me) so I did my best to try and replicate the look of them and the blending based on YT videos of people using actual copics.

Nothing can beat actual first-hand experience though, that’s why I need testers who have used actual copics to try and test this brush. The bundle is located here.

Please help me with testing it!

//edit: Also really hope for its inclusion in one of the future Krita versions.

Thanks for sharing your bundle here. I am sure you will get some feedback from the community.

I would also suggest adding a screenshot of how the brush looks.

//edit: Also really hope for its inclusion in one of the future Krita versions.

I think that needs @Deevad @RamonM and @halla’s approval. Bear in mind not everything gets in, the current default brushes are painstakingly curated and created by the team. but we can request them to have a look as a suggestion for future updates to default bundles.

Not sure what would be a good screenshot of the brush, lol. Also it would be cool if it gets in, because as I’ve said, there’s really no such brush in Krita right now.

For inclusion, it’s important that the brush is unique (which seems the case), but the icons also need to be conforming to the icons for the existing brush set. This is less important if the brushes are in their own bundle.

It would also be good if the brush presets were tagged with “Copic Marker” or “Alcohol Marker” if Copic is a trademark.

Have you seen this thread from earlier in the year? -

Although the default marker brushes aren’t bad, I still think they aren’t capturing the way Copic markers work. In reality, the Copic ink comes out wet and takes a while to dry, in the meantime, it can be mixed very easily with other colours as the ink flows. They also tend to bleed and darken as ink is drawn out by the paper as long as the marker touches it. For reference: [Marker pen rendering] Check out the most recent version of the Real Copic marker brush set below. Thanks to @…

Screenshot of how the brush looks when you draw with it. I mean draw some strokes and add the screenshot, it will help people understand how it looks when used. 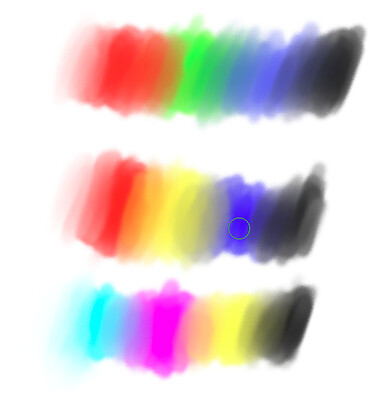 @halla I’m not that good with icons, I have marked the brush with Alcohol Marker tag (Copic is a trademark, yes, hence the title of this thread in the first place), so if someone could draw icon that fits with the rest for the brushes, I would be glad, seems like the only thing missing here.

Have you checkout the thread that @Mythmaker linked? it seems to have the same goal as yours.

I worked with Copic (ciaos) for years and that doesn’t look anything like it.

Please check out the preset. I’m not the greatest artist in the world and probably aren’t doing it a justice.

Also, updated the preset to contain colorless blender as well (redownload from the link in the OP).

This is taken from the other thread: 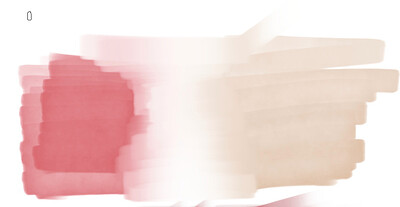 afbeelding1006×521 37.8 KB
Alcohol Markers have a very grainy look, this is caused by the ink that soaks into the paper unevenly. And if you go over a spot for a longer time or multiple times, it receives more ink. That’s why the edges of this brush are darker than the intermediate portions of a stroke. You reverse direction so go over it twice (and slower as well, but it doesn’t use the speed sensor).

I do want to look at the speed sensor once more, so might as well try that now.

There was another thread where we replicate copic markers.

Although the default marker brushes aren’t bad, I still think they aren’t capturing the way Copic markers work. In reality, the Copic ink comes out wet and takes a while to dry, in the meantime, it can be mixed very easily with other colours as the ink flows. They also tend to bleed and darken as ink is drawn out by the paper as long as the marker touches it. For reference: [Marker pen rendering] Check out the most recent version of the Real Copic marker brush set below. Thanks to @…

When making adjustments I thought of this feature request that I think could help us create better copic markers.

Did an artwork as a test of the brushes since nobody actually wants to download the thing and give it a go.

An artwork done as a test of my alcohol marker brush, since no one wants to actually test it. [458BC]

Do not worry people will test it when they have time. Creating artwork will surely attract qttention

. It is the reason I suggested adding screenshot to the original thread. 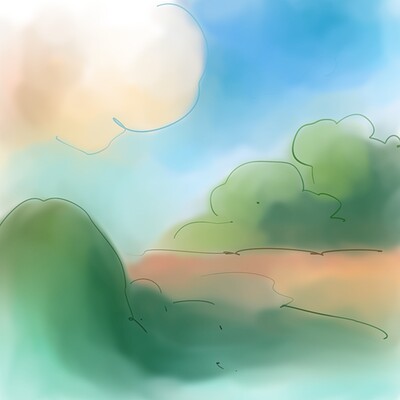 It’s impossible to include every brush in Krita. In fact, I almost think it’s too many already.

However, how about an official repository on the Krita site? Most of the non-standard brushes I’ve installed came from people’s Dropboxes, Google Drives or other file sharing sites.

The brush sets could be put in various categories, you could include voting and/or comments.

Maybe the uploads could be automatically run through a virus and malware checker before offering the files to the public.

So I tested your brush and compared it to my actual real life Copics I took from my shelf and I’m sorry to inform you that your preset doesn’t even come close to actual Copics neither in look or feel. 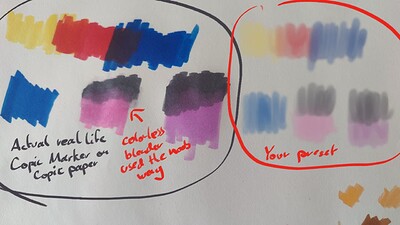 Actual Copics have pretty much no smudge. they are very sharp they don’t mix much really, they are not opaque and they are pretty uniform when overlapping with the same color. I used Copic paper for this because they bleed a lot on normal paper, but on normal paper the strokes overlap even less with themselves, making them look almost like printed computer graphics.

For the colorless blender: I made a patch with dark gray and pink trying to blend it the noob way (by drawing the two colors overlap an then apply the blender to it). This is not how the blender should be used like however, normally you make it suck up two colors and then draw with it until it’s empty to make gradients. Copics dont really mix that much, the best way to make them blend is to draw over the still wet color of the previous stroke, that’s why you often see artists with Copics have two or three pens in their hand at the same time, to quickly change. Some colors are for some reason impossible to properly mix (I don’t now why, perhaps because of some pigment or something) and it will look kinda weird but I wasn’t able to remember which ones and that’s a property of the real pens you probably wouldn’t want to emulate anyway. Opacity for Copics is mostly handled over speed, not by pressure. That’s why mastering Copics and other alcohol markers is really hard, you have to be very precise and very fast to get the best out of it.

Not really visible on the pictures but Copic markers usually have two tips. One round tip and a square on and Ciaos have a soft, brush like tip made out of foam (I just love that one) instead of the standard hard round one. All of them behave different.

The preset by @Hologram isn’t perfect either but much closer to the actual thing.

If Krita was to host them, don’t they share liability if some of the brushes break copyright (e.g. by extracting brush tips from commercial brushes)? I’m not a lawyer, but I’m not sure that liability can be waived by just having a disclaimer (or equivalent) that users are responsible for the brushes they upload.

That depends on the jurisdiction. In EU it’s mostly notice and take down for websites with user generated content, the User is responsible for the copyright infringement and the website has to take down the uploads or links if it becomes aware of copyright issues. Oversimplified of course but that’s basically it.

I see this is an interesting thread, but i have not clear if you are looking a realistic behavior or what other softwares called Copic markers, that usually are Color-smudge type brushes. I don’t know what paper are you using or trying to achieve, maybe the Copic special paper behavior or another? This is important too. Let me know to understand better, please.