Although the default marker brushes aren’t bad, I still think they aren’t capturing the way Copic markers work. In reality, the Copic ink comes out wet and takes a while to dry, in the meantime, it can be mixed very easily with other colours as the ink flows. They also tend to bleed and darken as ink is drawn out by the paper as long as the marker touches it. For reference:

Check out the most recent version of the Real Copic marker brush set below. Thanks to @tachiko for helping me out with the basic brush!
https://icedrive.net/s/7PRADWB4AYBNuS95SCbGP6kjFS3V

So the last week I have been experimenting with brushes and their settings. Just now, I have created a brush from which I want to build the Copic marker brush. Notice that it now creates a 10% opacity stroke, which is not what I am looking for. So I have a couple of questions:

I do still plan to add a noise texture to make the brush more grainy overall. That’s the way the ink of a regular copic marker looks when it is absorbed by marker paper. 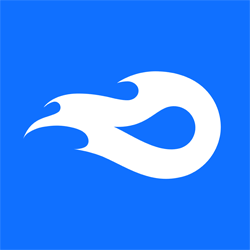 MediaFire is a simple to use free service that lets you put all your photos, documents, music, and video in a single place so you can access them anywhere and share them everywhere.

For a long time (all time) the Speed scaling has been ‘not good’ and you need to draw a stroke at a very high speed to see any effect of Speed controlled variation in brush preset parameters.
This has been discussed before in various topics on the forum.

The 5.1.0-prealpha builds do have an initial fix for this where you can change the Speed scaling factor: 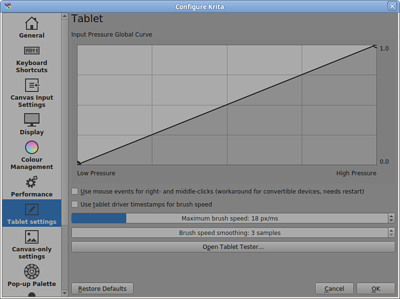 The lower the value of ‘Maximum Brush Speed’ then the more responsive the Speed control is to lower stroke speeds.

You could try the Nightly Build to see how well it works for you.
At first, I’d suggest that you modify something like Basic-5 Size so that its Size is controlled by only Speed and see how fast you need to draw a stroke to get it up to maximum size. Then you can get a ‘feel’ for it and proceed from there.

Aahh, so that’s why! Been wasting so much time trying to get it right to no avail

I intended to use this brush for the project I am working on now, so I guess that I’ll have to wait with creating my own marker brush until 5.1 hits Beta at least. But good to know it’s in the works.

By the way, shouldn’t there be improvements to the tablet tester than so we can set the speed right inside the menu? And is there a link to what the planned features/ fixes are for drawing speed?

It was @dkazakov who was working on that so he’d be the best person to ask.

If you’re using Windows then you can try the portable .zip package of the 5.1.0-prealpha without affecting your installed version:
Krita_Nightly_Windows_Build [Jenkins]
Many people do use it and if it’s got some wrinkles or new bugs (which it has) then you can switch back to using your installed release version.
At least that would get you started on developing the Speed control aspect.

I did a practice on that and I realized that to achieve this effect it is best to use textured fill layers, it gives a better result, adding noise to the brush doesn’t really help much. 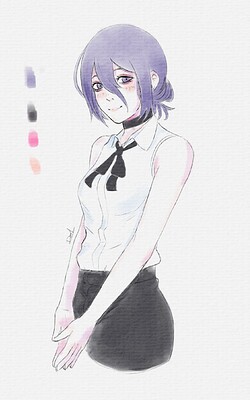 I share some settings that you can try in one of the default brushes, it gives a good result. 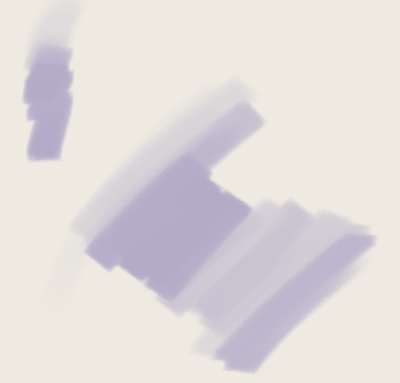 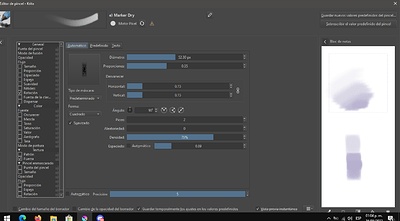 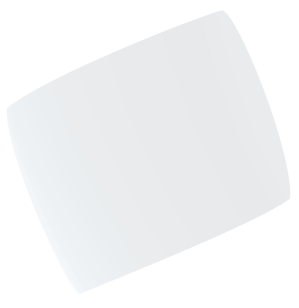 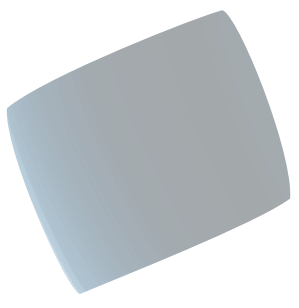 i’'ve also tried to paint on one layer and painting again on top with new color you can take last layer selection and delete new layer where they overlap. that way they dont blend as hard

These are really nice. I was modifying them to use tilt elevation for size (like having the two tips as you have in real life) but you can also tilt Copic markers to get a thin stroke. Adding the airbrush effect also helped to improve the feel. I got a really nice result, but made a mistake renaming a new brush preset so they ended up overwriting each other.

I will also have to check the spacing, I want it on auto.

i’'ve also tried to paint on one layer and painting again on top with new color you can take last layer selection and delete new layer where they overlap. that way they dont blend as hard

I don’t think I follow you on this one.

Okay, I think I got it to the point where I want it. The airbrush effect makes the brush quite slow and changes the texture, so I scrapped that. Perhaps we can add a flow multiplier for low brush and a size multiplier for low brush speeds once the speed sensor is fixed. That should hopefully lead to a better effect. I really like the brush a lot. Much better than the Copic Marker in Sketchbook! 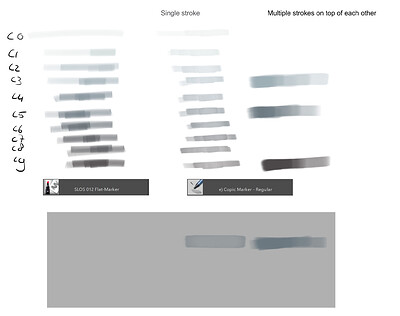 Instead of a smudge version (which looks more like it is paint), I made a Blender version. I think it is alright in the basis, but to mimic the real markers, it should have a more grainy blend in between the colours. 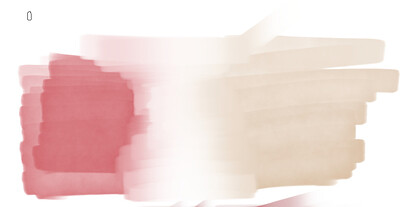 Also, it should feel like it is pushing the ink out of the paper and create a darker edge of pigment on the edge of its stroke (the pigment is absorbed by the alcohol and moved as far as the alcohol moves over the paper).

nice teamwork, these work nicely.
is it the tip png size and quality that is hurting the speed?
that is the tip i made, barely visible: 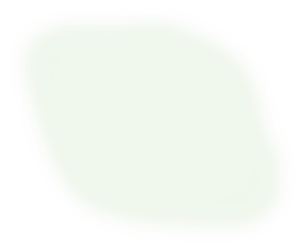 allso this is what i get when i delete the overlapping areas, except its painstaking 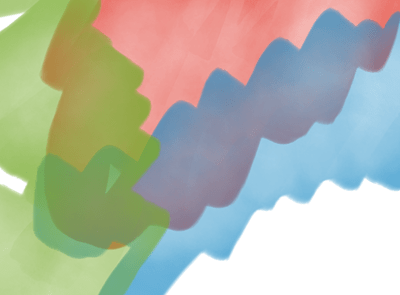 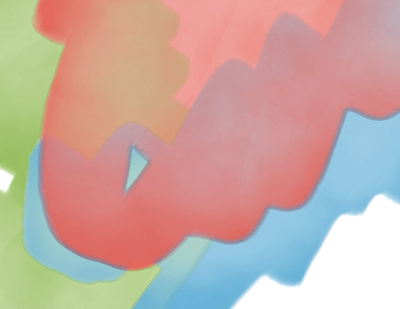 Hardmix instead of subtracts might creates a bleeding affect as well if you reduce brush size.
and maybe play with the mask brush opacity curve 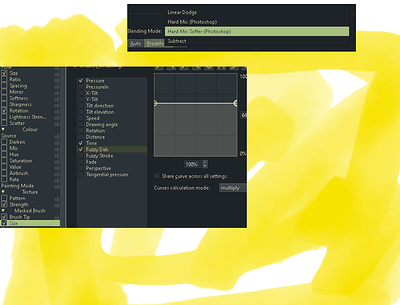 I haven’t incorporated the brush tips you put out here on the forum. How do they affect the brushes on your end? There can be a tiny bit of lag with rapid and long duration strokes, but I am not sure why.

I don’t see why one would remove overlapping areas. I am personally fine with the way it is. Perhaps when the pigment based mixing comes out in the next version or so that would be a viable approach.

the masked brush’s predifined brush tip from the realcopic bundle i downloaded is using the tip i made. uh, i’m getting new pc soon.

occassionally a portion im working on might benefit from deleting (can vary how much too). i agree the appeal of these brushes is that they overlap as they do.

Okay, so everything is fine then.
May I ask, how did you make the tip?

/offtopic: Might want to wait for the next generation of GPUs to come out, rumour has it the launch is slated for July.

i just used the bezier pen tool on a vector layer. and adjusted the points how i wanted. then filled inside (select inside with wand tool and grow selection a bit) then made transparent + some blur

thoughts on this one? _multiply_copic_Testured.bundle - Icedrive its named multiply three right?

It leaves a good effect but it is barely usable, the brush is very slow.

I agree with SchrodingerCat, the brush is way too slow to be useable for me. Maybe with Instantpreview it could work. I noticed that adding blending modes to the brush I made already slowed it down quite a lot, so I suspect this is the same (hadn’t checked the settings tbh).