Hi there! Me and @Kapyia have finished what we consider to be a perfectly functional plugin for the UI redesign! However, this is a VERY subjective and dense topic, so we need your feedback to make this as good as it can possible be.

You can find the release here, and we hope to gather all of your feedback to make this into an amazing plugin! So please, throw all your suggestions and criticisms in this thread!

I’m easily confused by these things - I don’t know which files I’m supposed to download?!

edit: I figured it out! - Installed and working… now for the testing!

I’ll give more detailed feedback later, but for now - I just wanted to say thanks for the work you’re putting into this - it’s an awesome plugin! The NuToolOptions in particular is a very welcome change from the default UI.

For sure, the Tool Options is really well thought out, the credit lies solely with @Kapyia for that one

Such an amazing work. Thank you guys

It’s wonderful to see how you managed to bring it all to this point.
Tool options on the right top corner is my favorite addition, as I feel like having way more control over those options - they don’t hide when I click on canvas, I can always see the whole widget, and they stay in canvas-only mode (as it’s so easy to hide it, it’s great).
In case of the toolbox - I’ll stick with the scripter version for now, as so far I couldn’t change its width to get just one column. Maybe I’ll dig into that code a bit more later. Ideally possibility to just drag this right edge to get 1,2,3… columns as in current docker, would be amazing, but I’m aware it’s not that simple

Getting into those minor flaws:

143-redesign1762×587 147 KB
Some textboxes in krita UI aren’t really visible well (like this width and height in first screenshot). Those two up and down buttons are also in the same spot as the text - I guess its the same element as in layer docker > opacity slider where it looks good. I guess these would have to look more like this ratio textbox.
Comboboxes look very cool without any borders, but when they are much longer than text, these are also not very distinguishable - maybe some alignment to the right would help?
Borderless buttons look awesome in topbar, but they cause some problems when those buttons are text-only (like this HSV adjustment screenshot). Buttons on bottom, and those on top (Edit present, xml) are not visible at all. Is it even possible to give borders only to some buttons?
Even with icons they don’t always look clear - for example those 10 buttons in transform menu (middle button has no icon, so its fully invisible

)
The last thing I thought about - do you think it’s possible to get rid of those dark lines between elements in layer docker (bottom left screenshot) They appear in usual theme too, but I just noticed them as the background color changed.
Ow, and those red buttons to close the docker are still a bit distracting, being the only colorful button in the theme

But these are of course only those flaws I could find to try to make the whole add-on better. Even in its current form it feels much less distracting than the usual one for me, and I’m going to use it (I already had some older version installed)
Once again big thanks for that. Cheers

This is beautiful feedback. I’ll get on it as soon as I can in regards to the theming issues you encountered, I’ll let you know when I got something to show!

Reading more into some of the things you mentioned, I’m thinking some of these changes should be done from the Krita source code side. Not prohibitive, but seeing changes might take longer, as changes done will probably only be applied for the 5.0 release.

These annoy me so much! I’ve been trying to get rid of them for a while, but I’ll get back to that

Is it even possible to give borders only to some buttons?

Yeah, it’s a little time consuming, but it can be done!

Speaking of krita 5.0 - I forgot to mention that topic

Do you have any plans of trying to make some of those changes in default krita theme, once they are more polished and tested? Or you just wanted it to stay an optional plugin?

Weird…I can’t seem to install this plugin right on Windows, I’ve tried both the Import Python Plugin Script and manually unzipping into pykrita, but neither method seems to work. It can be checked in the Python Plugin Manager, but doesn’t change anything on restart of Krita?

don’t you have a ‘redesing’ category on a top bar, after ‘help’?

I think that IF this is to be added to the default Krita theme, it needs to be absolutely battle-tested by a lot of people, and it really needs to be quite something. We can hope that, but I think it’s a lot more plausible it remains a plugin.

That gave me the idea that we need to improve our READ.ME

And thanks for the support, it was your thread that started this whole thing!

That also gave me another idea, since people have to explicitly install the plugin, it makes sense that by default the settings are enabled. We actually made it a lot less intuitive by having it disabled by default, so I made a commit just now fixing that, thank you!

That is @Kapyia 's awesome work, he deserves a lot of praise for that!

That would be very good, I thought I was going crazy when I didn’t see any change, I probably should’ve read the README though

Nah, it doesn’t make a lot of sense to have things disabled by default when you have to go out of your way to install it

@wojtryb So, a few things were fixed. The text buttons going invisible was actually a bug, that happened because of the way we removed borders for the buttons on the toolbar (which I didn’t see coming, tbh).

The arrows problem on the width and height is fixed, and now they look the same as the ratio bar.

Regarding the buttons on the transform, I suspect it is a theming issue, as I have no problems on my end… 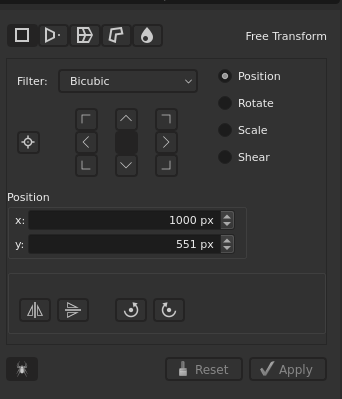 My suspicion is that your background and alternate colors are the same, which is what we use for the differences in the buttons. You can always use the theme we have available on the repo for now, or even better, please send me your custom theme! That way I can try to work around this and see if I can find a solution for all possible themes.