I was going through @LineDancer 's recent post and I found the discussions very interesting.

How to keep a commonly used figure handy in Krita? General Questions

Lets say I have a drawing or picture element that I often want to add to various paintings. For example, this could by my signature. I can keep this element in a separate .kra file and then open that file and copy the layer and insert into my painting every time… However, that is rather clumsy. Is it possible to keep something like that around as a “template layer” or something like that? Or maybe even a brush?

Such an asset library can be really very useful while making art for comics.
As mentioned by @Deevad and @Michelist , photobash plugin and vector libraries can be nice alternative for an image asset library.

But the problem I face in case of photobash that I have to keep changing folders and vector library supports vector forms only. In both cases,it is hard to save a custom drawn raster image directly via the dockers.Yet there is great potential in both of these image libraries.

I have used Medibang pro and there is an easy option available to save and maintain a custom image asset library.
Medibang pro also got very limited vector options( panel,text and asset library only).
I am not even sure if that is vector or more like a smart object thing. So as a safe option, MBP can be termed as a raster based art software only.

The main advantage is,in MBP,one can directly save a custom raster image as an asset image very easily via it’s in built docker.That docker operates quite identically like Krita’s vector library.

This small video may help to understand what I was talking about.

Now my target is to find a way similar to this inside Krita.
So if I am missing a trick inside krita,to achieve similar results displayed in this video,please let me know.
It can really help to make comics little faster.

This what you looking for?

So I’ve always disliked photo bashing just because of how painful it is. You need to find the image you want, sometimes hidden in the middle of folders, and I always really disliked. For this reason, I decided to change things, and create a plugin to streamline all this process. Here’s a gif of what it can do! [plugin] To install, the instructions are in the read me of the repository. Now I can finally do concept art without dreading using photos! This plugin searches recursively through th…

Thanks @tachiko ,but I have already used photobash.
It has a very good drag and drop image option on separate layers.
but it has no direct option to save custom art from canvas and few other important options I am looking for.

Well if photobash did not work you can try imagine board as an alternative. Is a tad different but has the same principles.

Supports pixel and vector and is able to save images with drag and drop from outside krita into the referenced folder. I do think Photobash and imagine are both able to solve the issue as they make a good connection to the drive easy.

However you said you said changing folders alot is the issue. What do you mean by it and what had you have in mind to try and solve it?

To save from canvas you just need to save into the folder to auto detect it, but I guess that is just a quality of life thing. I don’t see people saving into a reference folder with the canvas.

What are the other stuff?

Thanks @EyeOdin ,for providing a detailed insight.
I am not very sound with technical stuff,so I will try my best to provide a reasonable answer. 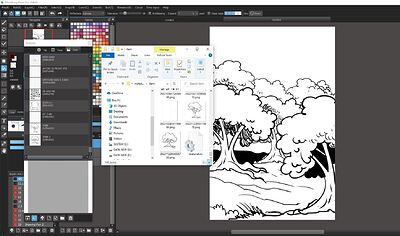 but whenever I am dragging them from the docker,they start to behave and operate like vector shapes on same layer.
Almost identical like vector library drag and drop behaves in krita.
In this way ,I can avoid the pain of having too many layers and can arrange everything from even 1 layer only !

I hope my explanations are not complicated

And why don’t you save the images you want to insert as brush tips? If you name the brush tips according to a freely selectable scheme, then you can have a library of raster images available in the brush editor. For this you reserve a pixel engine preset with which you select the desired image after calling the editor with F5 and place it as desired. I would design the naming for example like this, but you are free in the scheme you want to use:

And if you like, you put your selection into a bundle, this way you can enable or disable it anytime you like.

Thanks @Michelist ,that can be a option,but can get complicated when the list gets larger.
The other thing is they will not be easily editable from a single layer in the manner of vector mode.

The other thing is they will not be easily editable from a single layer in the manner of vector mode.

If it has to be editable like vector-graphics, you’ll need vector-graphics, at least I know no other way in Krita, and then vector-libraries seem to be the best option Krita has to offer right now.
Unless you have an idea how to solve this with a plugin. You would then “only” have to program that.

Well, at the moment we can only offer you ways to go / possible solutions on already existing functions of Krita, everything that goes beyond existing capabilities will need the corresponding initiative…

You can call it the search for the best workaround?!

I’m afraid if you need it soon you’ll have to do it yourself, if it has time you can go the route of a feature request and have to hope it gets picked up and implemented in Krita or a plugin in a timely manner.

Thanks for the feedback, @Michelist.
I was looking for this option,mainly for maintaining a temporary image library for different project.
Where I can simply drag & drop few pre-drawn elements directly on canvas to create some variations and also save some valuable time.
So far,MBP is providing me very easy and simple solution in that department,along with few other interesting options. That’s why in most cases ,I am still using MBP for black and white comic works.
So I am in no hurry

!
But as Krita has got more advanced assisting tools like colorize mask,(which is probably the best comics colouring tool currently available in the market,be it paid or free ! ),I wanted to shift my work to a single software rather than keep jumping from one to another.

There can be a 50 % workaround,if in future existing plug-ins like photobash or imagine board start to provide an option to save transparent png from canvas,via their dedicated docker.
Later the saved transparent png can be used as a material via drag and drop.
Maybe vector mode problem will not get solved,but at least they can be dragged on separate layers to create more detail and variation.

My experience is that photobash doesn’t even support transparent png .
So I have to wait and see if future updates can improve the situation.

Thanks @Guerreiro64 ,I will check it out.
Though I am looking for a way to do it inside krita only,rather than using any other software.

Your explanation is quite convoluted yes.

So let’s see for each point:

So the only thing I see that you want is really an automatic colour to alpha filter while saving, and this creates the question what colour should be alpha on your example it is white. Because the rest is just selecting the root folder as active folder and saving with the alpha background, which are normal krita stuff and by passes the first point too.

Also you should not be editing kritas resources while it is running so importing is better.

My experience is that photobash doesn’t even support transparent png .

I need to check but I believe it does. I have used alpha maps with it.

So, guys:I did a test now, with a mine character. I exported it as a png file with a transparent background and opened it in Inkscape 1.2.1. With the entire drawing selected, I went to Path > Trace bitmap. I chose the "Multicolor" option, with “Colors” as Detection mode and another, as indicated by the red arrows. Finally, I clicked “Apply”: 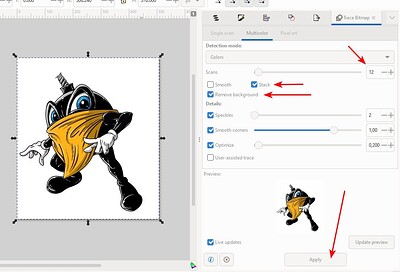 I dragged the vector drawing to the left. Since it’s composed of multiple colors, Inkscape has grouped the vectors. You must ungroup them by clicking on the Ungroup button.

Just click that button, but don’t deselect it! go to Edit > Cut. Then, in the layers docker, right-click and choose the “Delete Layer” option. The file must not contain any layers! 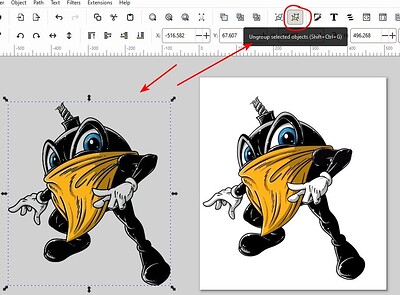 Go to Edit > Paste. The vectors will be visible again, just drag them all together onto the page. Go to File > Save As. Save the file in Plain SVG format (very important!). Close Inkscape and don’t save anything else. 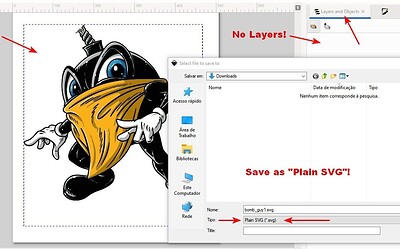 Then you can import these vectors into Krita. It’s even possible to change the colors (see the scarf and the character’s pupils) Certain colors I couldn’t change, like the light tones on the scarf… maybe because of my lack of experience.

As I said,I am very weak at technical part…so sorry about creating the unwanted confusion

I will try out the imagine board soon and see if I can find some way to use it for my cause.

For me it’s not showing.
I will check tomorrow ,if I am using the latest version or the old one.

I am not sure if this method will help me directly @Guerreiro64,but it’s a very nice and detailed tutorial for another different approach

!!
Generally I don’t use vector based softwares,but I will surely try this out !
Thanks a lot for sharing .

Perhaps my method works better if I export an image containing only two colors, exactly like the first example you posted: black for the outline and white for the inner color.

So, if you need to change the color of two elements, it’s simpler and faster. Let’s wait for another tip…

Initially I am looking for black and white options.
So let me learn about that first,because I am not very good with vectors