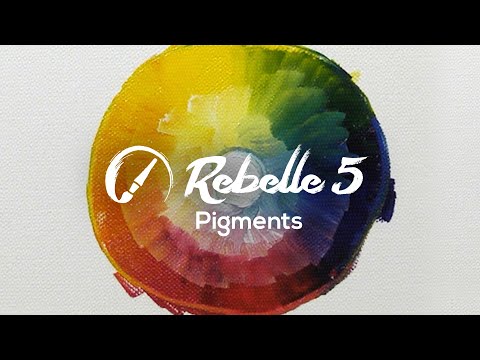 Looks fantastic!
But unfortunately, they don’t tell how to achieve this.

This is really something else !!
Long back I had tried out a demo version of Artrage.
It’s physical colour mixing in thick paint mode,is also felt very good and …very real !

I guess achieving MyPaint’s mixing might be easier since it’s already open source, so no secret: 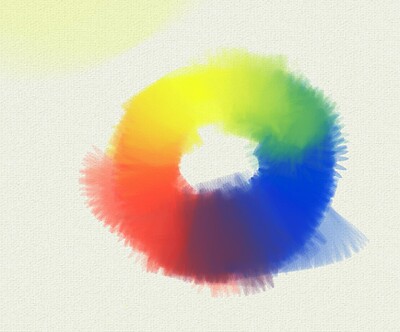 Would be awesome if someone implemented it for Krita.

There is no awesome brush effects but they can be achieved in Krita already, I guess, maybe not 100% like in Rebelle or Artrage or Corel Painter, but quite good. So with that mixing it would be pretty nice, I think.

(The image above is just three colors, pure red, pure yellow and nearly pure blue, just darkened a bit). Green, orange and a bit of underwhelming purple (I’m sure you could get better results with a bit different colors though - I mean with traditional paints you can get ugly purple too) appeared on their own.

I agree.
I can manage the mixing part with more control with blenders.
But some special blenders are needed for watercolour and thick paint brushes.
I have used different custom made blenders available in various brush bundles.
No doubt,they are extremely good!
But still I feel like probably thick paint and watercolour need some special blenders.
Anyway,that’s my opinion…but right now,I am quite content with how much I have inside Krita

No, you will never get green by mixing blue and yellow in Krita (for now). You’ll get an ugly grey color: 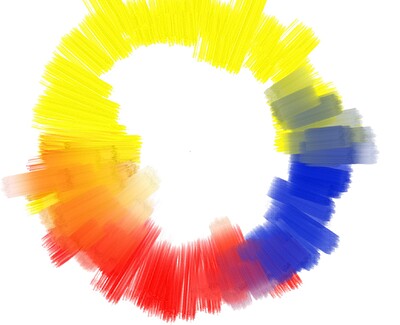 (sure you can make this circle look much better, but the it shows that you can get a nice purple and nice orange, but you won’t get green).

Btw since you mention watercolors and oil paints, what is it that you specifically need for those blenders? Have you tried the brushes that use the color smudge engine with RGBA brush tips and lightness options in Krita 5.0 beta?

No, you will never get green by mixing blue and yellow in Krita (for now). You’ll get an ugly grey color:

That Grey can grow to be so preetty though. (this is the ARD mix that is basically another RGB)

But I have been wanting to implement other methods to interpolate colors that would be a bit more similar to RL but it will be a bit esoteric and with a error. if you look at how paint mixes on the RGB you can see a weird pattern on them, a rule that I think that can be simplified.

My friend @urzeye is doing some tests. It seems that good results have been achieved. He is experimenting with oklab’s color mixing, gradients, filters, etc.
I hope better changes can be added to krita, but we don’t know the usage of gitlab yet.

That is so cool. The results look so nice and clean I really need to go at it again soon.

I think it will be quite hard for me to explain my problem with words.
So it will be better to make a small example.
Right now I am concentrating more on RGBA thick paint brushes.
So my examples are made with RGBA bundle.
The kind of colour mixing effect (made with medibang) I am trying to achieve is also mentioned.
I hope I have managed to explain it properly.
Now I need to learn the trick how to achieve such mixing effects in Krita 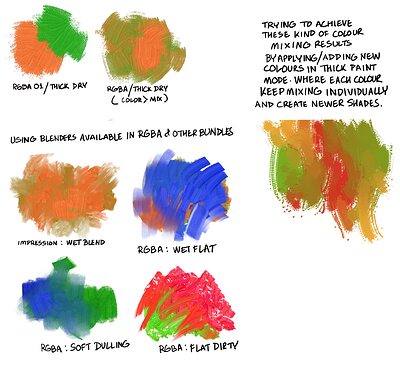 You can get green by mixing blue/cyan and yellow in Krita, you just have to change the blending mode. I know I’ve done tests before with subtractive mode, AND mode, and I think one or two others that worked to get that kind of mixing. Each mode had some sort of downside to it, though, such that I didn’t feel they worked quite like physical paint.

Unfortunately, in some quick testing I did just now, I wasn’t able to replicate those results with the smudge brush in lightness mode. In fact, with every mode I tried, the mixing looked like Normal mode, so I’m not sure it’s actually taking the blending mode into account. When I get a chance, I’ll do some more testing, and check the code to see if it’s actually using the selected blending mode at all.

That would be excellent, it’s a shame that Mypaint’s development is so slow.

@SchrodingerCat
MyPaint developing look like it’s really slow, one doesn’t know what’s going on there for over a year, I guess!
And that’s too bad @Brien_Dieterle stopped working at color-stuff there… so no strong achievement
in this context in MyPaint.

But on the other hand, Brien has started another interesting project,
his own paint-editor for iPad, named “Focal Paint”:

Take a look because it is very promising in terms of computer-color in nowadays graphics editors.
So you can read about it there:

“FocalPaint doesn’t use the traditional RGB or CMYK color models that most apps use. These models were designed for efficiency with little attempt to mimic real paints and media. FocalPaint pulls out all the stops and uses a 256 bits-per-pixel spectral model with 12 wavelengths representing the reflectance curves of natural pigments. These reflectance curves are blended using a weighted geometric mean algorithm to closely match the behavior of real paints and pigments. This is how blue and yellow create green in a realistic manner. Other programs might try to use HSV or other three-channel color models but the result is rarely convincing.”

So… Brien is da man!

And I review his editor from time to time.
For a one-man project it is quite good!

Unfortunately, in some quick testing I did just now, I wasn’t able to replicate those results with the smudge brush in lightness mode. In fact, with every mode I tried, the mixing looked like Normal mode, so I’m not sure it’s actually taking the blending mode into account.

That’s my impression as well. As for blending mode, I am quite fond of “Geometric Mean” - use that quite often. It’d be great if the smudging would follow it.

I think this topic is already in discussion here:

Ok, sure…anyone can instantly pick colors from a color pallet/wheel/etc. Why not develop an educational feature: You must electively turn on the feature as to not “turn off” new users. You must mix your colors manually like an artist using physical mediums with various primaries, 3 color to start, 4 color for ultra-hardmode (cmyk) This would serve to teach artists what to expect if they were to actually physically mix paints themselves and to understand tones, values, etc. I know this doesn…

You know what might be easy to implement and give an effect that achieve similar results.

I think focal paint is closed source though, So although it is mind blowing it won’t be any help for us to implement it in krita without looking at the code. As an for end user it is nice and I like to see its progress.

Once again… There’s no secret to it. Krita used to have this years ago. You can still see the code in KDE - Experience Freedom!, in krita/plugins/extensions.

In the end, it just wasn’t useful enough to keep maintaining it.

I looked at the code some more, because I remembered including the current blending mode in some way when I created the initial version of the Lightness mode for the smudge engine, and it is in there. As it currently stands, the current blending mode is used only for how the chosen paint color is blended into the existing paint (based on color rate). It does not affect how existing colors on the canvas are blended together.

I could potentially update it to make the smudge mixing use the blending mode too, but there are a few things that complicate it. First thing is I would have to figure out how to handle the Smear Alpha option, because right now that option is implemented by changing the blending mode it uses.

I’ll think about these things, and maybe if I find some free time do some testing to see if it could work. Because if we can get some more realistic mixing brushes, I think that would be pretty cool.