Do you want an icon chooser dialog on Overwrite Brush Preset?

The dialog I have in mind is this: 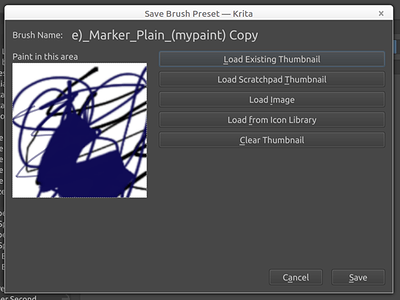 Pros (both not possible before):

Thoughts?
Pinging @Rakurri as the author of (kind of) both feature requests.
Pinging @Y.H.Lai because they wrote Edit the icon of custom brush preset so they might be interested in this one too

It allows you to load an image, so you can first prepare an image and then change the icon.

Because of the enthusiastic response, I pushed it straight to master. Should be available in the next daily build

thoughts: yes!
i think any kind of intermediate step after clicking overwrite is warranted.

more thoughts: would it also be possible to open this kind of dialog by clicking the thumbnail in the brush editor in case someone just wants to edit the thumbnail and nothing else? maybe a little pen icon appears in the corner of the thumbnail when you hover the cursor over it just to indicate that you can click to edit it.

Not sure if I count much as artist, but I don’t overwrite brushes a lot, mostly keep tweaks temporary, so I wouldn’t mind the extra click.

And I do have a few brushes where I just kept the icon but would like to change it, but never bothered because currently it’s rather messy.

But Halcyoen has a point, for changing the preset name we already have a separate edit button that directly writes a new brush version (apparently without saving temporary tweaks), so you could argue it would be more consistent to have that for the icon too.

Love this way of solving both problems!

Please yes, i always find so weird we can only create a brush thumbnail when creating a new brush.

Another thing if possible to edit thumbnails at anytime through that window would be great. I know we can edit the kpp files directly but this way is much faster

Would it be possible to just click it and have it as it always was, and Shift+Click for the menu or something? Or maybe a checkbox “Overwrite menu”. Just quick ideas.

Generally if we must choose one or the other, then yep, please rather activate the dialogue.

Thanks everyone for the replies! I implemented it and pushed and it will be available in the next daily build.

So… can I just let you know all the little changes I want and then go to bed and wake up and have them implemented by morning?

Yes yes. This would be great. Sometimes I change the preset so muchwhile testing the thumbnail becomes quickly out dated. And extra click is no problem considering the extra files I need to keep track before I use the final form of it to use the proper thumbnail for it.